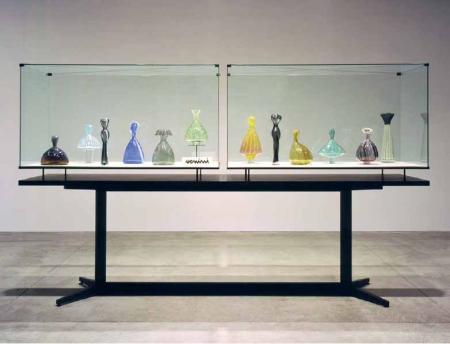 -Much of the ancient glass found today is recovered from tombs that protected it from the nearly inevitable breakage aboveground. The ancients buried domestic objects with their dead for use in the afterlife, and as a reminder of their former life. -We know that Julius Alexander was married, as his wife left the hairpin he made for her in his tomb. We know that he practiced his art in Gaul but was a citizen of Rome, possibly born in Africa, Egypt or Carthage.

-We believe he blew the pieces found in the tomb but since they are without signature we can only be sure that he made the hairpin. Earlier historians attribute certain bottles found in Rome to his workshop. The â€˜steleâ€™ is in the Musee des Beaux Arts in Lyon. In his tomb was common domestic glass of the third century, six bottles, four plates, two cups, one hairpin.- Josiah McElheny, text from -The Only Known Grave of a Glassblower- (1994)

The work of Josiah McElheny exists in the space between the factual, the historic, the imagined, the fantastic. Often accompanied by a description which places the work in another dimension, that of narration or historical perspective, the actual pieces suggest another, possible world.....a world of the present, a world of the imagination.

McElhenyâ€™s show at the Centro Gallego de Arte Contemporanea will be the first major exhibition of his work organized by a European museum. It will feature a number of important recent works, including Untitled (White) (2000), From an Historical Anecdote About Fashion (2000) and Verzeliniâ€™s Acts of Faith (1996) as well as two new pieces commissioned by CGAC. Together, they illustrate the various aspects of McElhenyâ€™s practice, which can seem both seductive and puzzling: the objects which are evidence of the artistâ€™s skill in glass-blowing, learned through years of apprenticeship; the tension between reconstructing history and imagining history; the relationship between the fabricated and the appropriated object; the original and the copy; the tension between architecture and the objects and spaces contained within; the notion of display and how it effects our viewing of an object; the relationship between text and object; etc.

Together, all of these elements provide a rich experience for the viewer: he/she must take an active position in entering McElhenyâ€™s world. They must filter and edit the information provided for them in order to achieve a coherent whole. Which is not to say that the picture they form is going to be definitive.

In fact, one could divide McElhenyâ€™s work into four related themes: Modern Objects, Historical Objects, Painting and Mirrors. Each work in the exhibition may be seen in the light of one of these themes. For example, Untitled (White) and From an Historical Anecdote About Fashion represent modern objects. Impurities and Travels in the Roman Empire represent historical objects.

Verzeliniâ€™s Acts of Faith and other works refer to historical painting and the Borges works refer to the mirror. The artist refers to these categories as the history of objects past and present as well as the way in which they are reflected. In From an Historical Anecdote About Fashion, we read the following text: In the 1952 Venice Biennal, Venini, the famous glass design company, entered a display of vases designed not by the factoryâ€™s artists and architects, but by the glassblowers. The unusual shapes and cloth-like patterning were based on the haute couture fashions which the ownerâ€™s French wife wore when she visited the factory. Ginette Gagnous Venini was intimately involved in running the company with her husband Paolo Venini, and could often be seen by the male workers in the furnace room as she ascended and descended the stairs of the office.

McElheny goes on to describe the eventual influence of Christian Dior designs on Ginette, which were then translated into the glass designs in the Venini factory. But what remains with the spectator, as we look at the multicoloured glass models of figurines and vessels that are arranged in a vitrine, is the figure of Ginette, walking down the factory hallway, going up and down the stairs of the office, eyed by the workers below. It is a seductive image, one that resonates with fact and fiction. And in combination with the visual materials that accompany it, it is typical of McElhenyâ€™s work: between history and imagination, between the street, the factory and the theatre.