Andreas Gursky: Werke/Works 80-08 is a comprehensive exhibition with more than 130 photographic works. Highly detailed and massive in scope, his compositions are simultaneously representative and abstract. Stan Douglas: the focus of the show is his outstanding video and photo installation entitled Klatsassin. Anthony Hernandez has depicted the social landscape of Los Angeles for more than 40 years, now he presents a collection of photographs from the 1970s and 1980s. The exhibition 'Two Visions: Emily Carr and Jack Shadbolt' examines how both of these artists addressed the natural world. 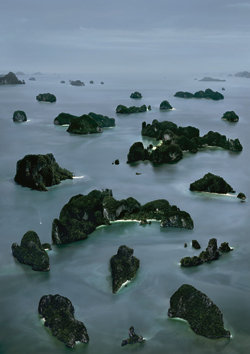 Andreas Gursky's photographs are celebrated as some of the most compelling images of our modern world. The Vancouver Art Gallery will be the only North American museum to present Andreas Gursky: Werke/Works 80-08 the largest and most comprehensive exhibition to survey this renowned German artist's remarkable career. Selected by Gursky himself from his substantial collection of photographic work, this landmark exhibition of more than 130 artworks will be on view from May 30 to September 20, 2009.

"It is a privilege for the Gallery to be the only North American museum presenting this extraordinary survey of Andreas Gursky's photographs. Bringing the work of this internationally renowned contemporary artist to Vancouver would not have been possible without the partnership of our co-organizers the Kunstmuseen in Krefeld, Germany and the Moderna Museet, in Stockholm, Sweden," said Vancouver Art Gallery director, Kathleen Bartels. "The Gallery puts great emphasis on collaborating with other visual arts institutions to present the work of today's most important artists."

For the artist, photography is not a neutral tool of representation, but a medium for constructing reality. Highly detailed and massive in scope, Gursky creates images that often emphasize human-constructed patterns in urban, rural and remote landscapes to create compositions that are simultaneously representative and abstract.

For the first time in many years, Gursky will reduce the scale of his photographs to the panel picture format that launched his career. This method of presentation is a radical departure for Gursky. The artist has recently completed three major museum exhibitions that have featured a small selection of his images at the massive scale for which he has become renowned. Reprinting his images in the panel format allows him the ability to present three decades of work in one comprehensive exhibition for the first time. Andreas Gursky: Werke/Works 80-08 will provide an important opportunity to see how the meaning of the artist's photographs shifts with the change in presentation, and will offer an occasion for reflection at a critical stage in the artist's career.

Andreas Gursky: Werke/Works 80-08 begins with photographs from the artist's student days studying under Otto Steinert and influential documentary photographers Bernd and Hilla Becher, and concludes with seven new images printed in the monumental size for which he is best known. This massive selection of images depicts Gursky's progression, from early photographs based in the documentary tradition to his first experiments with digital technologies and his eventual fine tuning of the process to highlight the fabricated nature of the photographic image. Presented in a chronological chain, the exhibition offers an unprecedented opportunity to witness the evolution of Gursky's subject matter, aesthetic sensibilities and conceptual strategies.

Werke/Works 80-08 is co-organized by the Vancouver Art Gallery, the Kunstmuseen in Krefeld, Germany and the Moderna Museet, in Stockholm, Sweden and is curated by Kunstmuseen director Dr. Martin Hentschel.

Stan Douglas is a renowned Vancouver artist whose art has consistently and provocatively explored the idea of historical record and narratives of location. Much of his work is thematically linked to this region and the many different peoples who have inhabited these lands.

The focus of this exhibition is Stan Douglas’ outstanding video and photo installation entitled Klatsassin. Shot on location in the Cariboo and Chilcotin districts of British Columbia, and on a studio backlot in Vancouver, the video offers a non-linear or, what Douglas describes as a recombinant narrative of the events that initiated the so-called Chilcotin War of 1864. In addition to the video installation the exhibition includes a group of seven location photographs of sites as diverse as Barkerville, Quesnel Forks, Stanley and Vancouver. In addition, this exhibition provides a unique opportunity to see an earlier work by the artist, entitled Pursuit, Fear, Catastrophe, Ruskin, BC, 1992, which also offers a study of this region and the forces that have shaped it.

The exhibition is organized by the Vancouver Art Gallery and curated by Bruce Grenville, senior curator.

Anthony Hernandez has depicted the social landscape of Los Angeles for more than 40 years. In the tradition of Ed Ruscha’s gasoline stations and Every Building On The Sunset Strip, Hernandez and contemporaries such as Robert Adams and Lewis Baltz invested an apparently detached representation of the urban with an element of the social. Whether his subject is a young domestic worker waiting at a bus stop or a woman applying eye makeup in a reflective shop sign on Rodeo Drive, Hernandez subtly captures a myriad of economic and racial layers of LA’s social spaces.

The first Canadian exhibition of this Los Angeles artist’s work, Anthony Hernandez will present a remarkable collection of photographs from the 1970s and 1980s. From large-format, black and white urban landscapes to colour portraits of Beverly Hills shoppers, the images are compositionally precise, formally beautiful and reveal facets of life in Los Angeles that are surprising and largely disregarded.

For most British Columbians of Euro- Canadian ancestry, Emily Carr defines how two subjects are viewed---the forest landscape of the province and the totemic sculpture of the First Nations. Subsequent artists working in the province have reacted to or against Carr’s example and Jack Shadbolt had a particularly strong relationship to Carr’s work. This exhibition, on the occasion of the 100th anniversary of Shadbolt’s birth, examines how both of these artists addressed the natural world, First Nations totems and masks as subjects for their work. The exhibition also addresses the role of drawing in the work of Carr and Shadbolt and encourages the visitor to see both differences and similarities in their approach.

The exhibition is organized by the Vancouver Art Gallery and curated by Ian Thom, senior curator/historical.

The Vancouver Art Gallery is a not-for-profit organization supported by: its members; individual donors; corporate funders; foundations; the City of Vancouver; the Province of British Columbia through the BC Arts Council and Gaming Revenues; the Government of Canada through the Canada Council for the Arts and the Department of Canadian Heritage. We thank everyone for their continuing generosity.