Iran Inside Out features 35 artists living and working in Iran alongside 21 others living in the Diaspora. The result is a multifarious portrait of 56 contemporary Iranian artists challenging the conventional perceptions of Iran and Iranian art. As one of the important protagonists of L'Art Informel, Jean Miotte's work is inspired by the desire of the postwar generation to create a universal human language through art, a path to peace. Terna Prize for Contemporary Art: on display the 16 winning works united in the Prize's theme of connectivity but diverse in subject and media. Its goal is to open new avenues of discourse among culture and commerce, and to provide artists with a platform from which to be recognized by the global arts community. 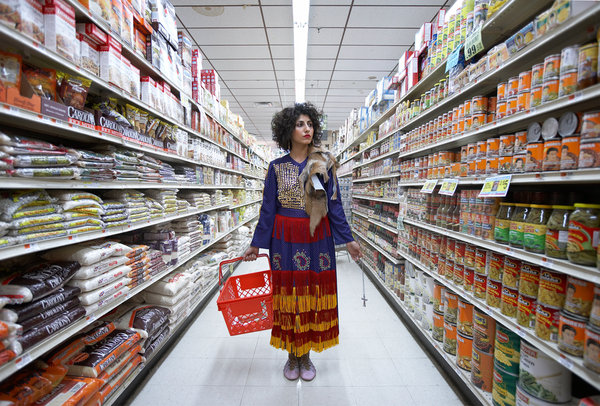 Iran Inside Out
Influences of Homeland and Diaspora on the Artistic Language of 56 Contemporary Iranian Artists
June 26 – September 5, 2009
Curated by Sam Bardaouil and Till Fellrath

The Chelsea Art Museum is pleased to announce the opening of its upcoming exhibition Iran Inside Out. The groundbreaking exhibition features 35 artists living and working in Iran alongside 21 others living in the Diaspora. The result is a multifarious portrait of 56 contemporary Iranian artists challenging the conventional perceptions of Iran and Iranian art.

In Iran Inside Out, 210 works comprising painting, sculpture, photography, video and installation come together, in a rare moment which allows visitors an intimate look into the people, both inside and outside a country that is more complex than images of veiled women, worn out calligraphy and what a handful of other emblematic images would suggest.

Curated by Sam Bardaouil and Till Fellrath, Iran Inside Out is an examination of the means through which a young generation of artists is reconciling the daily implications of cultural and geographical distances with the search for individual artistic expression. The exhibition offers an unexpected insight into the artistic energy of a culture that is constantly evolving as Iranians living both in and out of the country, come of age living and working in contentious societies. While half of these artists such as Vahid Sharifian, Barbad Golshiri, Farideh Lashai and Jinoos Taghizadeh reside in Iran, the other half including artists such as Shirin Neshat, Shahram Entekhabi, Mitra Tabrizian and Shoja Azari has been interspersed in the Diaspora.

Iran Inside Out explores the process of deconstruction and reinvention of both, self and art that has resulted from this cultural schism, often swinging between openness and dialogue, or seclusion and separatism. Ironically, contrary to one’s expectations, the artists living abroad often draw more on their cultural heritage, while those on the inside focus more on issues of everyday life without much regard to what ‘the outside’ views as specifically Iranian references. Yet, within these disparities, one element stands strong: the recurrent references, sometimes ambiguous, at times emotional, often nostalgic and on occasion satirical and even tragic to Iran the country, Iran the past, the Iran which has been lost and that which could be found.

The exhibiton will be traveling to the Farjam Collection/Hafiz Foundation in Dubai in March 2010. The exhibition is the second of three exhibitions under CAM's EastWest Project in 2009 which aims to promote and foster cross cultural dialogue.

Born in 1926, Jean Miotte began exhibiting in 1952 and continues to this day. As one of the important protagonists of L'Art Informel, his work is inspired by the desire of the postwar generation to create a universal human language through art, a path to peace, a way to overcome frontiers after the horrors of war. Miotte's work is greatly influenced by jazz, and especially by dance.

The Miotte Foundation, housed in the Chelsea Art Museum, preserves the oeuvre of Jean Miotte and fosters research into the Informel movement.

Terna, Italy’s major Energy Transmission Operator and primary owner of the Italian National High-Voltage Electricity Transmission Grid, and the Chelsea Art Museum today announced an exhibition of artwork by Italian artists that were awarded the first Terna Prize for Contemporary Art. Transmitting Energy: A Contemporary Metaphor - Winners of the Terna Prize for Contemporary Art, on display at the Chelsea Art Museum June 25th – July 12th, 2009, features the 16 winning works united in the Prize’s theme of connectivity but diverse in subject and media.

The goal of the Terna Prize is to open new avenues of discourse among culture and commerce, and to provide artists with a platform from which to be recognized by the global arts community. The Prize winners include artists of all ages, some internationally renowned and others relatively still unknown. The works, including nine photographs, three paintings and four mixed media works, were first exhibited at the Palazzo delle Esposizioni, Rome’s largest interdisciplinary exhibition venue, in November 2008.

In establishing the Prize, Terna worked closely with independent curator and contemporary art critic Gianluca Marziani and contemporary art advisor and curator Francesco Cascino. “The Terna Prize is not only a contest, but a cultural project that encourages dialogue and serves as a catalyst for the transmission of values among generations,” said Terna Prize Curator Gianluca Marziani. “Exhibiting these works in New York enables us to begin to internationalize the Prize and to share with new audiences the many ways in which this award connects artists through their energy and experiences.”

"Terna has created a unique platform through which a highly talented generation of contemporary Italian artists can be appreciated on an international scale,” said Sam Bardaouil, Chelsea Art Museum curator. “The quality and diversity is fascinating and we are delighted to play a role in introducing these artists to the New York arts community."

“The first Terna Prize winners reveal a fascinating range of work being produced in Italy today,” said Julián Zugazagoitia, Terna Prize jury member and Director of El Museo del Barrio in New York. “The exhibition is a wonderful opportunity to see these artists in the U.S., many for the first time.”

The Terna Prize for Contemporary Art was awarded in three categories: Terawatt, for established artists invited to participate, and Gigawatt and Megawatt, for emerging artists under and over the age of 35, respectively. One artist was selected as the first prize winner in each category; six additional artists were recognized and received monetary awards in the Gigawatt and Megawatt categories. The winning artists were selected by a jury of art professionals and chosen from a shortlist of 124 nominations from a total of more than 3,000 entries. The Terawatt winner received €100,000 Euros (approximately $130,000 U.S.) and, in a joint agreement with Terna, the full prize will be donated in the artist’s name to the MAXXI, the future Italian Museum of the Arts of the 21st Century. (When the MAXXI opens in Rome in November 2009, it will be the largest contemporary art museum in Europe, dedicated to collecting, preserving, studying and presenting important examples of 21st century art and architecture.) Also, one Online Award winner was chosen by the public from the entire pool of entries via the Terna Prize website and received a monetary award. All winning artworks in the Gigawatt, Megawatt and Online Award categories will be purchased by Terna and will become part of the Company’s contemporary art collection.

Highlights of Transmitting Energy include Terawatt Award winner Luigi Ontani (b. 1943) for Electricthrone, a large lenticular print comically depicting the artist being shocked by an electric chair; Gigawatt Award winner Francesco Arena (b. 1978) for Split Panel with Nietzsche’s Head, a sheetrock panel containing a bust of Nietzsche peering out from within; and Megawatt Award winner Andrea Chiesi (b. 1966) for Kali Yuga 57, a graphic, oil-on-linen rendering of a derelict steel plant. Other artists on view include Riccardo Albanese (b. 1977), Elena Baldelli (b. 1983), Gabriele Bonato (b. 1980), Gabriele Giugni (b. 1980), Giovanni Ozzola (b. 1982), Davide Eron Salvadei (b. 1973), Giovanni Albanese (b. 1955), Davide Bertocchi (b. 1969), Laura Cantrarella (b. 1972), Rocco Dubbini (b. 1969), Raffaela Mariniello (b. 1961), Antonio Riello (b. 1958), and Hôtel de la Lune (Gian Maria Tosatti, b. 1980 and Elisabetta Mancini, b. 1980), winner of the online-voted People’s Choice Award.

CATALOGUE
A full color, bilingual catalogue is available at the Chelsea Art Museum and from Silvana Editoriale (www.silvanaeditoriale.it).

ABOUT THE TERNA PRIZE FOR CONTEMPORARY ART
The first Terna Prize for Contemporary Art was launched in July 2008 in Rome at the building site of the MAXXI, the future Italian Museum of the Arts of the 21st Century, a symbol of the need for innovation and of the new role that contemporary art has in Italian society. The competition was open to Italian artists and to artists of other nationalities working in Italy. In October 2008, Terna signed a three-year Memorandum of Understanding with the Italian Ministry of Cultural Heritage and Activities aimed at promoting and enhancing Italian contemporary art; it is the first agreement between a private company and the Ministry on contemporary art to create permanent value for all of Italian society. Terna’s main goal is to support contemporary art and artists and to establish a new relationship among companies, the art world and the government by interconnecting culture, economics, public and private entities.

The second annual Terna Prize will be launched in Rome on May 26th, 2009 when the jury for the prize and other details about the next competition are announced. To broaden the international scope of the award, the second competition will include a new, fourth category, which will be open to all artists of any nationality working in New York City. The Terawatt, Gigawatt and Megawatt categories will remain open to all artists of any nationality working in Italy. Terna plans to award two three-month residencies in New York for the Megawatt and Gigawatt First Prize winners and the sole winner in the New York category will receive a three-month residency at the American Academy in Rome.

ABOUT TERNA
Terna is Italy’s major Energy Transmission Operator and primary owner of the Italian National High-Voltage Electricity Transmission Grid. The publicly held company operates more than 98 percent of the country’s electricity infrastructures, for a total of about 58 thousand kilometers of grid. Terna is also responsible for the transmission and dispatching of energy throughout the entire country, and ensures the safe management and supply of power year-round.

Chelsea Art Museum
556 West 22nd Street - New York
Hours
Open Tues – Sat 11am to 6 pm
Thursday 11am to 8 pm
Closed Sunday and Monday
Admission
$8 adults, $4 students and seniors, free for members and visitors 16 and under
Groups $4 per person for a minimum of 10 — call ahead to arrange.