Four brightly colored, large-scale recent works in metal and fiberglass, dating from 1999 to 2001, will be installed in the most dramatic outdoor space for sculpture in Manhattan: The Iris and B. Gerald Cantor Roof Garden. The sculptures range from an open safety pin and a garden trowel, each more than 21 feet tall, to an enormous handkerchief recalling the one that typically appeared in Mies van der Roheâ€™s breast pocket, to a pair of painted cast-aluminum blueberry pies Ã  la mode. 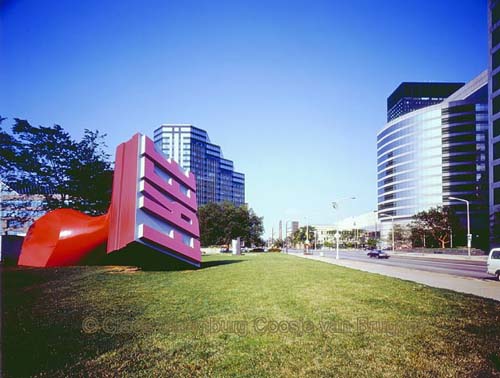 The Metropolitan Museum of Art will mount an open-air display of outstanding large-scale sculptures by Claes Oldenburg and Coosje van Bruggen in the 2002 installation of the Iris and B. Gerald Cantor Roof Garden, opening May 1. Oldenburg and van Bruggen on the Roof will feature four sculptures - created since 1999 - that have never before been exhibited in New York. These works are based on stereotypical objects of daily life that the artists have transformed, giving them fresh identities and new functions. They will be installed in the 10,000-square-foot outdoor space offering spectacular views of Central Park and the Manhattan skyline.

On view will be three very large, intensely colored works, on which the husband and wife sculptors have collaborated in recent years: Architectâ€™s Handkerchief, 1999, fiber-reinforced plastic painted with polyester gelcoat, 12-1/2 feet high; Corridor Pin, Blue, 1999, stainless steel and aluminum painted with polyurethane enamel, more than 21 feet high; and Plantoir (the French word means dibble or trowel), 2001, stainless steel, aluminum, and fiber-reinforced plastic, painted with polyurethane enamel, nearly 24 feet high. In addition, in the south corners of the Roof Garden, there will be a two-part sculpture, Shuttlecock/Blueberry Pies I and II, 1999, cast aluminum painted with acrylic urethane, each four feet high.

Claes Oldenburg was born in Stockholm in 1929 and grew up in Chicago. He attended Yale University, where he concentrated on English and art. He worked in Chicago as a police reporter for the City News Bureau in the early 1950s before studying at the Art Institute of Chicago. He became a U.S. citizen in 1953. In 1956 Oldenburg settled in New York's then-gritty Lower East Side; there, he created the object-filled environments The Street (1960) and The Store (1961) as well as performances based on his surroundings that led to his being hailed an inventor of Pop Art.

Oldenburg went on to make giant soft sculptures, including a 15-foot-long ice-cream cone and a bed-size hamburger, and re-created manufactured objects, such as a light switch or a toilet, in two versions: one hard (made of cardboard or wood) and one soft (made of kapok-filled vinyl or canvas). In the mid-1960s he embarked on what he calls Proposed Colossal Monuments, renderings of startling modifications of familiar locations exquisitely drawn in crayon and watercolor. In Proposed Colossal Monument for Park Avenue, New York: Good Humor Bar (1965), for example, a melting ice-cream bar is substituted for the MetLife Building. A bite out of the bar allows traffic to pass.

From drawings of fantastic monuments Oldenburg moved on to actual or "feasible" monuments. The first, The Lipstick (Ascending) on Caterpillar Tracks (1969, restored 1974), was a 24-foot-tall steel, aluminum, and resin lipstick mounted on a platform on tank treads. It was commissioned by students at the Yale School of Architecture. Intended as a podium for speeches on issues of the day, it was installed in Yale's Beinecke Plaza in front of a Neoclassical building inscribed with the names of World War I battle sites.

In 1976 the 45-foot-tall Clothespin was placed in central Philadelphia. Later that year Oldenburg joined forces with Coosje van Bruggen on the reconstruction and re-siting of the 41-foot-tall Trowel I (1971-76) on the grounds of the KrÃ¶ller-MÃ¼ller Museum in Otterlo. Thus began their collaboration on what van Bruggen was to call Large-Scale Projects, commissioned works permanently placed and emblematic of their site. To date, 40 such projects have been realized in the United States, Europe, and Japan, among them Batcolumn (1977) for Chicago, Spoonbridge and Cherry (1988) for Minneapolis, Bicyclette Ensevelie (Buried Bicycle) (1990) for Paris, Saw, Sawing (1996) for Tokyo, and Ago, Filo e Nodo (Needle, Thread and Knot) (2000) for Milan.

Coosje van Bruggen was born in Groningen, the Netherlands, in 1942. Trained in her youth as a ballet dancer, she received a master's degree in art history with a minor in French literature from the University of Groningen.

After working as an assistant curator in the Painting and Sculpture Department at the Stedelijk Museum in Amsterdam (1967-71), she became an independent curator. She married Oldenburg in 1977 and moved to the United States the following year. In 1982 she served on the selection committee for Documenta 7 in Kassel. Van Bruggen has been senior critic in the Department of Sculpture at the Yale University School of Art and, together with the curator Mildred Friedman and the architect Billie Tsien, taught a class at the Harvard Design School.

Van Bruggen has written about Oldenburg's early work as well as on the artists Gerhard Richter, Bruce Nauman, John Baldessari, and Hanne Darboven and the architect Frank O. Gehry. In 1985 she created the characters for II Corso del Coltello (The Course of the Knife), a legendary outdoor performance in Venice, Italy, done with Oldenburg and Gehry.

Van Bruggen became an American citizen in 1993. She and Oldenburg live and work in lower Manhattan, in California, and on a centuries-old estate in the Loire Valley, where the presence of nature and another culture (the region was home to such literary figures as Rabelais, Balzac, de Tocqueville, George Sand, and Proust) has affected their recent work - for example, the park and garden sculptures placed on the roof.

The team develops ideas through discussions and drawings. They then build models that are enlarged through factory procedures under their close supervision. Unlike most large outdoor sculpture, the works are polychromatic, made using colors formulated by van Bruggen.