66 Exhibitions, Discussions, Photo Workshops, Guides Tours. Over 60 exhibitions in an setting of 12th-century churches and former industrial buildings, with other events using the town's Roman heritage and inherent drama to present photography in a way found nowhere else. Most of the exhibitions are produced by the Rencontres and many of them go on to travel to other parts of the world. On display the multifaceted career of Robert Delpire, a retrospective by Willy Ronis, the marvellous sequences of Duane Michals, the radical portraits of Brian Griffin, a projection of the mythical Ballad of Sexual Dependency by Nan Goldin, and many more. 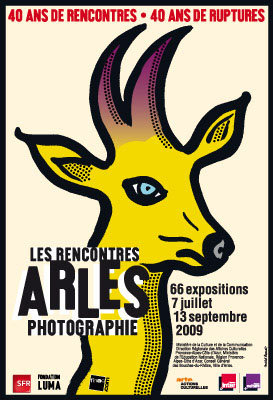 At the 40th Rencontres d'Arles there's something for everybody: over 60 exhibitions in an incomparable setting of 12th-century churches and former industrial buildings, with other events using the town's Roman heritage and inherent drama to present photography in a way found nowhere else. Most of the exhibitions are produced by the Rencontres and many of them go on to travel to other parts of the world. Presentation and layout are meticulously prepared by the Rencontres team in conjunction with the artists and with curators from leading international art institutions.

40 YEARS OF RENCONTRES
Featuring photographers and defenders of the discipline who got the Festival on the road in 1970 and have been consolidating the Rencontres' reputation ever since.

THE DISCOVERY AWARD AND THE BOOK AWARDS 2009
The Rencontres fifteen artistic directors to date and the first two teachers at the French National School of Photography in Arles are organising exhibitions by their nominees for the Discovery Award. The Contemporary Book Award and the Historical Book Award: almost 400 books published in 2008-2009 are available for consultation by visitors.

THE REGULARS
A retrospective by Willy Ronis, who will be celebrating his 99th birthday.
Photographs chosen by Jean-Claude Lemagny from Bibliothèque nationale, and images of his encounters with hundreds of photographers over the last 40 years in Arles.
Recent work by Rencontres founder Lucien Clergue.
The LUMA Foundation's first exhibition in Arles, with American artist Roni Horn.
Four exhibitions from the French National School of Photography: An attentive eye, Summer Moments, Scandalous Reality and Infra-Mince.

40 YEARS OF DISRUPTION
Retrospectives and recent works by photographers who left their stamp on the Rencontres by breaking with the accepted standards of their time.

ÇA ME TOUCHE, NAN GOLDIN'S GUESTS
Back in Arles after creating a sensation in 1987, the famous American artist has invited 12 photographer friends: David Armstrong,Marina Berio, Jean-Christian Bourcart, Antoine D'Agata, JH Engström, Jim Goldberg, Christine Fenzl, Leigh Ledare, Boris Mikhailov, Anders Petersen, Jack Pierson, Lisa Ross and Annelies Strba.
In addition she is presenting three personal exhibitions: The Ballad of Sexual Dependency, a visual diary of her life in New York; Sisters, Saints and Sibyls, a tribute to her sister and to those rebel women fighting for survival in society; and her own collection of photographs.

OTHER DISRUPTIVE PHOTOGRAPHERS
The marvellous sequences of Duane Michals. The radical portraits of Brian Griffin.Martin Parr and the first showing of his project on luxury before the financial crisis, with a soundwork by Caroline Cartier. More mystery from Joan Fontcuberta as he digs into Michelangelo Antonioni's film Blowup. The first colour series by the great social documentary artist Eugene Richards. The first-ever showing of Bohdan Holomicek's work on the political resistance of Vaclav Havel. René Burri and the Great New York Blackout of 1979. Plus Paulo Nozolino, Thomas Florschuetz, Elger Esser, Naoya Hatakeyama... Then, the postcard collection of James Allen of the Center for Civic and Human Rights in Atlanta: the lynching of African-Americans in the United States in the early 20th century and the progress leading up to the election of Barack Obama

OPENNING WEEK
7-12 JULY 2009
TALKS, DISCUSSION, BOOK SIGNINGS
An important aspect of the Rencontres is the festive/educational promotion of photographers and creative photography in the context of the busy Arles summer. Opening week brings together all the photographers and curators on the programme, and offers admission-free discussions, colloquia and book-signings. A great chance for informal meetings with professionals from all over the world.

Thursday 9 July:
Duane Michals + the Pictet Award
Poetry and humour as the American photographer presents his career at the Théâtre Antique.

Friday 10 July:
The Night of the Year
The best photography of 2008-2009 from the top dailies, magazines, agencies and collectives. On 15 screens in the Parc des Ateliers.