For the fifth time, the Biennial presents a selection of some of the most interesting and relevant in the international contemporary art scene. The audience will become acquainted with artists from all over the world that in various ways reflect on our time. The project aims to present a generous, poetic and sensual portrayal of human diversity and the human capacity for wonders as well as failures through the gaze and works of contemporary artists. Curated by Celia Prado and Johan Pousette. 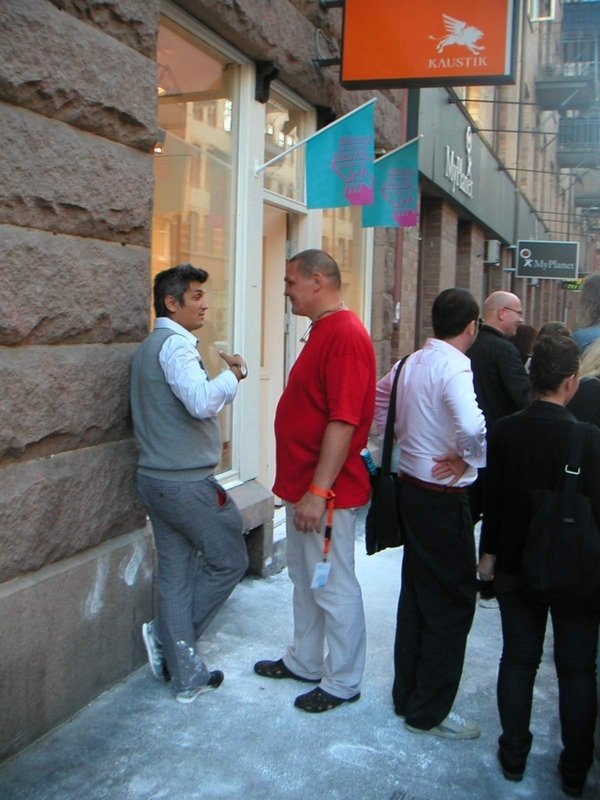 Göteborg Biennial for Contemporary Art takes place September 5 – November 15 2009. The main venues in this year´s Biennial are; Röda Sten, Göteborgs Konsthall, Göteborg Museum of Art, Göteborg City Museum, City Library of Göteborg and Gallery Box. For the fifth time, the Biennial presents a selection of some of the most interesting and relevant in the international contemporary art scene. The audience will become acquainted with artists from all over the world that in various ways reflect on our time.

The 2009 Göteborg International Biennial for Contemporary Art aims to present a generous, poetic and sensual portrayal of human diversity and the human capacity for wonders as well as failures through the gaze and works of contemporary artists.

We recognise What a Wonderful World as the title of a song written by Bob Thiele and George David Weiss in 1967 specifically for Louis Armstrong. Intended as an antidote for the increasingly politically and racially charged climate of the 1960s, What a Wonderful World conveyed an optimistic tone with regard to the future, in line with the aspirations of the young generation for a fairer society and a better world. In addition, the title referred to Louis Armstrong’s belief in the human capacity of acting for the common good. However, wonderful may also be read as wonder-ful, that is, full of wonder as in awe-inspiring, astounding or perhaps even frightening.

Someone has poignantly claimed that, “Our past is tragic, our present is catastrophic, but fortunately we have no future,” meaning that the future is our hope precisely because we do not have it, we do not possess it. We have to create it, intentionally or unintentionally, inevitably guided by utopian or dystopian visions. The fact that we do not possess the future opens for the possibility to make the world anew. So - Quo vadis? Where are you going? What world and what future will we create?

Action and interpretation are intimately interconnected and interwoven in ethical deliberations as well as political deeds. In our complex age where there is little faith in absolute truths, cultural and moral legitimacy play a crucial role. Understanding does not always refer to firmly established affiliations or communities, but, in an ever-increasing degree, to fluid, nomadic and temporary identifications without fixed roots, grounded in mycelium-like networks. In such a reality, artistic depictions and approaches become important contemporary references and pointers to the future.

As a continuation of the previous biennial’s discussion on the condition of the political, this biennial presents reflections on the conception of the political by elucidating various aspects of individual versus collective choices, democratic participation, and the power of art to depict, interpret and convey observations and movements in society.

With What a Wonderful World we hope to present an exhibition for contemplation and discussion that reflects its time by illuminating utopias and dystopias as well as history in an ethical and political perspective.

During the Biennial 2009, both Swedish and international artists will be highlighted. Here are some of the participating artists in the coming Biennial:

The Göteborg International Biennial for Contemporary Art is committed to exploring new ways of mediating the works presented in the Biennial to local, international and specifically Nordic audiences.
The 2009 Biennal will investigate its’ thematics What a Wonderful World further through THE SALOON, a series of artist talks during five days, from October 14-18.

THE SALOON is a critical programme inviting dialogue and participation from a wide public as well as arts and cultural professionals in order to engage the whole knowledge base that this Biennial seeks to represent.
The seminar programme is developed in collaboration with the artists supporting their ability to function like guides, exploring and locating their practices and processes.
Such contexts for exploration may encompass describing the faces of an artwork, considerations of choice, negotiations and decisions and sources of inspiration as well as the strivings and passions behind the urge to express oneself. These practical and intellectual concerns have also come to play a more important role in the civic debate towards artistic research in the Nordic countries.

THE SALOON aims to develop an accessable research methodology stressing the interactivity and deepening understanding between audiences, artists, educational and cultural organisations, including keythinkers and arts professionals in the Nordic arena.