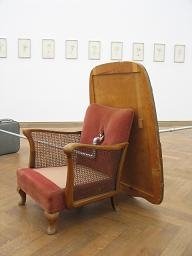 The exhibition Ordinary Revolutions brings together eight contemporary Latin American artists and showcases their respective conceptual approaches. Using a variety of different media such as sculpture, installation, video, collage and drawing, the artists play with the origins of their source material and its individual poetic qualities, as well as with the sheer complexity of the inherent allusions and references. Their works are based on everyday objects, which in turn relate to the history of art (in particular to that of Modernism), society and politics, as well as to the spheres of the private and the intimate.

Alongside the deployment of banal quotidian objects, there is a sense of the precarious—the art of improvisation—in the exhibited works, which also plays a substantial role. The arising ideas and their solutions, arrived at in such a seemingly casual manner, offer the viewer an enormous revolutionary scope and potential for perception because they consciously avoid predetermined, traditional systems of classification, whilst at the same time suspending the process of argument and thinking itself, and in so doing open up an enticing, intellectual arena.

The exhibition's curator Stefanie Kreuzer cogently sums up the essence of the show: "Valuing improvisation as a positive characteristic, viewing ad hoc arrangements as a creative area for both thought and perception, straying from the beaten track, being quick-witted and able to react—all the works presented in the exhibition are imbued with these attributes, which seems to me to be very promising precisely in situations of crisis. Why not 'Learning from Latin America'?"

A 120-page catalogue on the exhibition comprising 90 colour illustrations, texts by Michel Blancsubé and Stefanie Kreuzer, and a foreword by Markus Heinzelmann will be published by the Verlag für moderne Kunst Nürnberg.