The photographic works of Arthur Renwick, Adrian Stimson, and Jeff Thomas are diverse, and to varying degrees, confrontational expressions of First Nations identity. The exhibition explores their individual strategies, which can be gentle, campy, or whimsical, while creating conversations between contemporary art, mass culture, and representations of the past. Curated by Martha Langford and Sherry Farrell Racette. 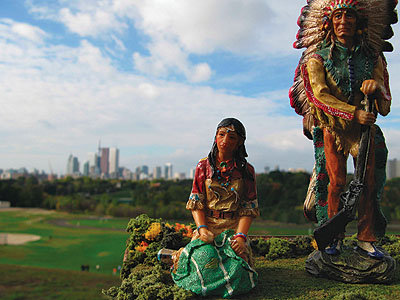 The photographic works of Arthur Renwick, Adrian Stimson, and Jeff Thomas are diverse, and to varying degrees, confrontational expressions of First Nations identity. Unmasking explores their individual strategies, which can be gentle, campy, or whimsical, while creating conversations between contemporary art, mass culture, and representations of the past.

All three artists use staging, or posing, of the human subject, referring directly or obliquely to photographic documents, such as Edward S. Curtis's monumental and flawed The North American Indian, as well as stereotypical three-dimensional objects, ranging from sculptures to toys. All three also look to the built environment and the landscape for vestiges of First Nations representation and still active systems of belief. Every work in Unmasking carries signs of rupture in the historical account – signs that draw out specific histories and contemporary realities. Their mises-en-scène and performances are based on sound research and deep understanding of cultural traditions, while firmly implanted in the present. Their images powerfully state: we are here now; recognize us; acknowledge us; deal with us.

The exhibition has been organized by independent curators Martha Langford and Sherry Farrell Racette for the Canadian Cultural Centre, within the context of Photoquai – Renwick, Stimson, and Thomas are featured in the 2009 edition.

Arthur Renwick was born in Kitimat, British Columbia, and grew up in the Haisla Territory. His striking imagery refers to Aboriginal spiritual and cosmological traditions as dynamic forces present on the landscape and emanating from the body. His work is represented by Leo Kamen Gallery, Toronto.

Born in Sault Ste. Marie, Ontario, Adrian Stimson is a member of the Siksika (Blackfoot) Nation in southern Alberta. His work includes installation, painting, performance, video, and photography. Performances at Burning Man on the Black Rock Desert, Nevada, have created "Buffalo Boy" as well as the "Shaman Exterminator" who seeks to explore the myths, falsehoods and realities of Shamanic being.

Jeff Thomas was born in Buffalo, New York, and currently lives in Ottawa. He is a member of the Onondaga (Six Nations Confederacy). His photographic work raises issues of racial stereotyping and mutual misunderstanding through references to the histories, symbols, and actualities of urban-Indian experience. His work is represented by Stephen Bulger Gallery, Toronto.

Martha Langford is an associate professor and Concordia University Research Chair in Art History at Concordia University in Montreal. Major works include Suspended Conversations: The Afterlife of Memory in Photographic Albums (2001) and Scissors, Paper, Stone: Expressions of Memory in Contemporary Photographic Art (2007), as well as an edited collection, Image & Imagination (2005), all from McGill-Queen's University Press. An active independent curator, she was artistic director of the international biennale, Le Mois de la Photo à Montréal 2005.

Sherry Farrell Racette (Timiskaming First Nation) is an interdisciplinary scholar, an illustrator of children's books, a painter and multi-media artist whose work combines traditional and contemporary media. Her scholarly and artistic work has increasingly merged, with divergent outcomes from the same body of research. Recent essays include "Haunted: Images of First Nations Children in Residential School Photography," and "Looking for Stories and Unbroken Threads: Museum Artifacts as Women's History and Cultural Legacy."