Twelve video artists take part in the 'Ultra-New Materiality' project. The artists describe contemporary reality, focusing their attention on concrete problems, concerning the same social aspect, rather than on universal meanings. These are such aspects as the existence, the functioning and critic of the middle class -a class new to Russia, and slightly less novel to the West- which is engaged in 'non-material production'. In her project 'Popular Astronomy' Alexandra Paperno expresses the inexpressible. She points out the fact that simple is awfully complicated. What is most important here is that the traditional position of the artist as a genius lecturing the viewer is altered. 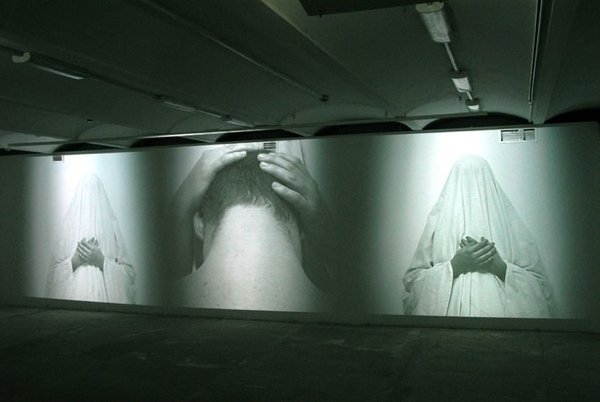 Twelve video artists take part in the «Ultra-New Materiality» project. It is worth stressing that among the participants, apart from Russians, there are artists of the post-diaspora (people who left Russia after the fall of the Soviet state) and even one Eastern European artist whose family is connected with the first wave of the Russian emigration of the 20th century. The fact that not all artists live and work in Russia, shows that this project goes beyond local Moscow art context.

The meanings, tendencies and problems that the artists express in their works are topical not only for peripheral zones of the modern art, but also for the global intellectual scene. It is very important that the viewer understands it, as it then becomes clear that this project is devoid of gloss and superficiality of national art events, and demands less piety and more involvement. The viewer is given greater freedom to assess and understand what he sees; the condition of eminence of a work over the spectator is retracted, bringing it closer to common viewing.

Besides the choice of medium, the artists were neither limited by any set topics, or exposition requirements, nor were they forced to reach any final product, aimed at disclosing a particular subject. It is the choice of artists, who managed to build a coherent narrative out of their 12 solo projects.

The artists describe contemporary reality, focusing their attention on concrete problems, concerning the same social aspect, rather than on universal meanings. These are such aspects as the existence, the functioning and critic of the middle class — a class new to Russia, and slightly less novel to the West, — which is engaged in «non-material production». It represents, first of all, the so-called «creative class»(R. Florida), namely managers, journalists, — the people who are currently demonstrating the biggest interest to contemporary life, including contemporary art, and have a certain bearing on the political situation, while appearing quite inert at first sight. In is, it its essence, the story of the splendor and misery of «non-material production» society that questions its «non-materiality».

This story is by no means abstract; it consists of the investigation of concrete problems, everyday structures, and distinctive human feelings. Most works in this project can be said to follow the tendency best described as sentimental-critical. At the moment contemporary art is turning its attention to the person, to reality, to individual perception of a created image, and it is the most interesting moment in contemporary art. It is made possible only by the return of emotionally-focused work, which is best reflected in time-based arts, such as video. For a long time, a contemporary artist?s camera has been directed at the floor, or the ceiling, or random objects, but now more and more often it shows people, or objects they can reach out for. Ultra-New Materiality tells the story about present day reality which is «within a human reach» (J. Kassavetis), without any generalizations, metaphysics or abstraction.

In her project «Popular Astronomy» Alexandra Paperno expresses the inexpressible. She points out the fact that simple is awfully complicated. What is most important here is that the traditional position of the artist as a genius lecturing the viewer is altered. Here the viewer, who for the past twenty years or so has been required to be an active participant while at the same time has been intimidated and to certain extend victimized, is finally rehabilitated. The viewer is now absolutely equal to the artist in his ability to feel free and joyful. In any case, Alexandra Paperno puts a lot of effort into achieving this. Her position is profoundly ethical and positively moral and, most importantly, her art is seductive and symbolic as indeed art is supposed to be.

The title of the exhibition is taken from a well-known, once popular but now absolutely antiquarian French book* that is filled with tables, pictures, engravings, technical drawings and all possible theories and stories about the night sky. The idea that a lofty and complex science about the stars can have a popular format without loosing its quality is fundamental here. It meets another, American idea of popularity as general accessiblity (we certainly mean Pop Art which, in its own time, remained being an art for the elites). Today, on crossroads of popular science and contemporary art, the project of Alexandra Paperno defines popular (populus, social) as a place of finding of new meanings. Her paintings became simpler, which gives a feeling of an improbable openness.

It is also a story about light. The light of heavenly bodies or the light derived from the encounter of the cultural experience of the viewer with the deeply personal experience of the artist. It is as if a person growing up suddenly realizes that his first love and his first success, hid dreams and bitter disappointments are not at all unique and that it is wonderful.

Alexandra Paperno was born in Moscow and studied art in New York at the Cooper Union for the Advancement of Science and Art, where she received her degree in fine arts in 2000. In 2004 her first solo exhibition was held at the National Centre for Contemporary Arts (NCCA), Moscow. Her exhibition «Star Maps» was presented at Stella Art Gallery, Moscow, in 2006. Alexandra Paperno has participated in a number of group exhibitions, including Moscow International Forums of Art Initiatives, Prague Biennale of Contemporary Art, etc.