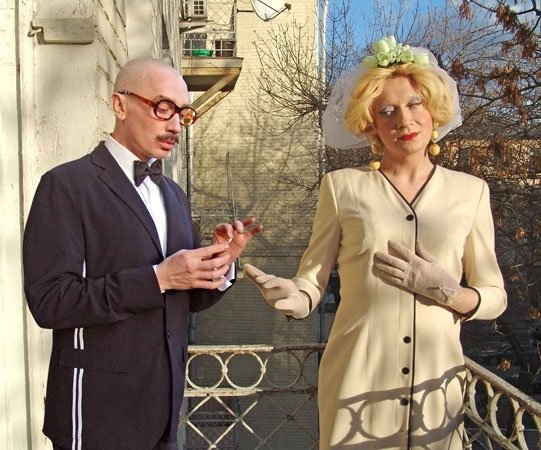 The project «Workshop of Feminine Creation» is to promote the idea of a Museum of Feminine Art in Russia. For now, this idea is an abstract one, but further on it is to be realized in the institutional forms that are most appropriate for the development of feminine art. This interdisciplinary project includes a whole range of events: scientific conferences, creation of a web-portal, exhibitions, archives and catalogue edition. These various activities assist in developing the discourse of problems of feminine art activism and gender reflections. While analyzing the meaning of feminine art in the post-Soviet Russia, the project marks out the perspectives in further work of its support and growth.

The tradition of Russian feminism is related to the idea of social equality of women in the Soviet society. However, the gender theory as it is has started to spread in Russia during the perestroika time, the period of consolidation of democratic freedoms, pluralism and policy of openness. Women artists are in the forefront of this process. Russia gets to know the Western feminism at the end of its heroic period, but experiences it brightly and originally. In post-Soviet Russia, the gender theory becomes an effective instrument of deconstruction of totalitarian ideology and forming of the Russian woman’s new identity. The actual issues at the turn of the 90s are elimination of Soviet myths and study of private spaces, where sensuality is of special importance. In 2000s, feminist art peaks, conditioned by the formation of new identities and emergence of the new generation of women artists on the art scene. The large-scale exhibition «Art of Feminine Gender» (2002) in the Tretyakov Gallery marked the recognition of importance of feminine art. In the last decade, Russian feminine art has focused its attention on the analysis and deconstruction of stereotypes concerning the image of a woman in contemporary mass media. However, organization of feminine art exhibitions is still an initiative of women artists themselves. It has no constant institutional support.

The project is realized by means of governmental support, assigned as a grant according to the decree of the President of the Russian Federation (n. 192-RP d/d 14.04.2008).

Michail Grobman is a renowned Israeli artist, and before that he was one of the leading figures in Moscow avant-garde art of the 1960s. He emigrated in 1971 and almost immediately took a noticeable position in the cultural landscape of Israel by founding an alternative artistic group called «Leviathan». Collage is just one of his activities, as well as painting, installation, and object. Since the very beginning, Grobman’s stimulus for developing the technique of collage has been the manipulation with «alien» material — for example, images borrowed from Soviet publications. Starting from that point, Grobman’s collage turned into a conceptual «graphic installation» that always creates a specific type of message, never registered before. Such are his minimalist «poems» composed from the artist’s name, a series of «visual verses» consisting of magazine headings, and old book covers that have been transformed into poetic texts. The text plays a crucial part in Grobman’s oeuvre — in some pieces, he achieved a full interpenetration of visual and textual components.

The exhibition presents works made by the artist from the 1980s till today — collages made of reproductions and drawings, most of which are executed on white paper. A sharp and provoking combination of authentic drawing with an «alien» and secondary material raises a question whether an original artistic message is possible. Today, in an era of mass production of visual information, the artists sometimes cease to feel like «creators». Grobman’s collages try to grope after the creative identity again, though this time without any romantic mythology. By building his work in the context of another’s creation, the author achieves a comic effect. Having taken others’ pieces as a basis, Grobman converts the artists into his own characters, using text and drawing to challenge them to an outspoken statement floating from the depths of the unconscious. The insertion of a spontaneous drawing into a ready-made image breaks the safe integrity of the phantom world of reproductions, and then the glossy surface reveals an anxious and pessimistic vision of mankind. This is not the most comfortable philosophy, but Michail Grobman makes the spectator remember what is a living master’s hand and unpredictable thought.

Andrei Bartenev presents a «hand-walker sculpture», his fantasy about wall bars, one of the most popular gymnastic apparatus. The artist fills almost the entire space of the hall with the bars and invites the spectators to exercise.
Wall bars, a gymnastic apparatus made of bars set closely against the wall, is a widespread home sport apparatus. It has proved to be effective for training of grown-ups and kids.

The room occupied with the wall bars is very attractive. After you have bought the wall bars, you can gradually assemble a home sport complex, adding if necessary all possible barbell stand benches, crunch benches, horizontal bars, etc. One should pay special attention to the wall bars equipped with rings, a ladder and a rope.

It is healthy to train children to exercise on the wall bar from early years. The goal is not only your child’s potential sports achievements, but also upbringing: values of healthy way of life, goal setting and achievement, gaining prestige among compeers.
The exercise course has a positive influence upon everyone’s health. It will be of special importance for people who suffer from scoliosis (including children) and especially helpful to the middle-aged and elderly persons (older than 40-50 years of age), since it prevents aging body changes that lead to height loss. The exercises can be used for warming up before further physical activities.

The idiom «Swedish family» makes people in Russia smile ambiguously. When Swedes get to know the connotation that the idiom has in the eastern neighbor’s language, they are very surprised and try to find an explanation.
At first, the idea of the exhibition has appeared as a joke during the joint exhibitions of the artists of both countries. Only later it has become clear that the theme of the family, be it Russian or Swedish, is characteristic of many artists’ oeuvres. The theme can unite as well as separate. The initiators and curators of the exhibition are the Uppsala haka group that unites five artists: Helena Laukkanen, Natasha Dahnberg, Anna-Karin Brus, Katarina Sundkvist Zohari, and Agneta Forslund.

We have tried to invite the authors who touch upon different aspects of the theme in their art, to take part in the exhibition. The most important thing is to explore what is contemporary family. Is it a single mother waiting for spousal support, or a homosexual couple with kids from previous marriages, or a refugee family applying for residence permit... or a young couple who has given birth to two kids and bought a new house, or happy older husband and wife surrounded by children and relatives, or a childless couple who has adopted twins?

Relationships in the family are the very part of the research that has the largest space. Many artists open their private lives to the audience and narrate the story of their families.

The research of the family is done using various methods. The exhibition presents documentations of performances, installations, primers, pencil drawings, sculptures and embroidery artworks... We have selected the authors who use very different forms of the contemporary artistic language.

We have to speak about different things in different ways. Here there is a little bit of everything, like in any family.