The exhibition, featuring works by a young generation of artists, draws their inspiration from found images and their own creative originality, mapping out new territory in contemporary art photography. In this context, the term Karaoke symbolises a certain pleasure in citing and trying out familiar patterns and styles. The karaoke machine invented in 1971 by Daisuke Inoue presents melodies and lyrics hesitantly at first and then with increasing confidence. In this popular form of entertainment, the serious and the light-hearted are never far apart. 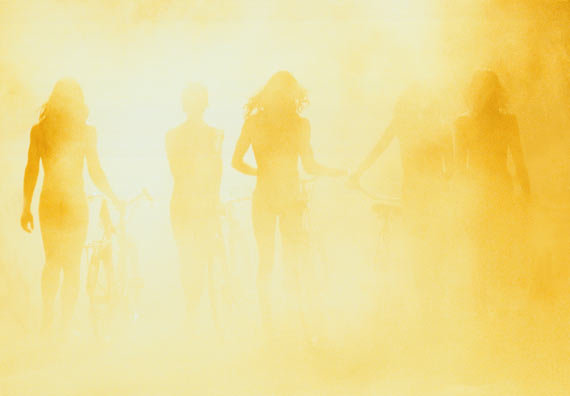 Seems familiar? We are constantly bombarded by images and information – at school, at work, in newspapers and on the web. All of these stimuli carry a multitude of underlying codes. Day in and day out, we navigate our way, more or less successfully, through a torrent of texts and images, subtle advertising messages and hard facts, official instructions and personal messages. New and long-established media alike vie for our undivided attention. What we tend to overlook is the fact that we are increasingly subject to a second, media-dominated reality in which we are no longer directly involved.

The exhibition featuring works by Becky Beasley (GB), Thomas Galler (CH), Aneta Grzeszykowska (PL), Thomas Julier (CH), Anja Manfredi (A), Ryan McGinley (USA), Taiyo Onorato / Nico Krebs (CH/CH), Clunie Reid (GB) and Oliver Sieber (D) explores this densely woven tapestry of direct and indirect experience, of immediate and mediated seeing. It quietly flags up the relationships and juxtapositions that permeate our casual, everyday navigation of parallel worlds. The young generation of artists presented here draw their inspiration from found images and their own creative originality, mapping out new territory in contemporary art photography. In this context, the term Karaoke symbolises a certain pleasure in citing and trying out familiar patterns and styles. The karaoke machine invented in 1971 by Daisuke Inoue presents melodies and lyrics hesitantly at first and then with increasing confidence. In this popular, non-hierarchical form of entertainment, the serious and the light-hearted are never far apart. Singing along develops into individual interpretation and imitation develops into innovation.

Aneta Grzeszykowska (*1974), Anja Manfredi (*1978), Becky Beasley (*1975) and Thomas Julier (*1983) are keenly aware of the affinities between their own work and that of artists who broke with certain artistic dogma to win their own freedom. Cindy Sherman’s 70-part series Untitled Film Stills remains one of the foremost landmarks in post-modern art around 1980 and is widely regarded as the epitome of a feminist take on media reality. Over a period of several months in 2005, Aneta Grzeszykowska painstakingly adapted each and every subject in this milestone of recent art history, which itself has become enshrined as part of the canon, presented in countless exhibitions, essays and papers. When Anja Manfredi looks back on the historic highlights of modern dance in the 1930s and reconstructs outstanding works from the period by the likes of Isadora Duncan or Anna Pavlova for her camera, what she creates is to be regarded – in much the same way as the visual appropriations of Aneta Grzeszykowska – as a new approach and a new enquiry from today’s viewpoint.

Becky Beasleys sculptural black-and-white photographs such as Peel (Floor) and Peel (Wall) possess a vitality reminiscent of the early lead performances of Richard Serra, in which molten metal was hurled at gallery walls. Beasley presents her compelling large-format works in similarly energetic configurations – at times in the form of unprotected, matt prints, and at other times aseptically sealed behind cold, green acrylic glass. Whereas Curtains I-III featuring three almost identical curtains, takes as its theme the sometimes tortuously slow creative process of the composer Glenn Gould, Trap deploys extremely subtle references and associations in its visual tracing of the 1972 performance Untitled (Tea Party) by conceptual artist Bas Jan Ader, who, like Beasley today, staged his work solely for the camera.

Thomas Julier forges a similar link to the conceptualists of the late sixties when he (either solo or in collaboration with Cédric Eisenring) collates his vast creative output in small, copied spiral notebooks. As a visual form of equal importance, for wall display, he creates works showing bleak urban architecture and ambiguous organic shapes that recall the typologies of Bernd and Hilla Becher, or the laconic cycles by Ed Ruscha and Sol Le Witt. Julier’s series explore existing works with a sense of detachment, levity and decisiveness that is thoroughly contemporary and at the same time leaves the historic sources of inspiration firmly in the past.

Thomas Galler (*1970) uses clear-cut search criteria to trawl the deluge of media images for visual and textual quotes, which he then arranges in new semantic configurations. He is fascinated by such concepts as death, violence and protest in diverse cultures and by the way that these are portrayed in almost identical images. In his compelling new 5-part video Week End (IDF Series) the artist celebrates a new popular visual form on the internet. Thomas Galler has collated hundreds of snapshots of young Israeli female soldiers who have posed for the camera in their free time and posted the photos online. These pictures are well known from Viva and MTV video clips and are swapped thousands of times a day on mobile phones.

Unlike Thomas Galler, who tends to appropriate his visual sources without any further intervention or manipulation, Clunie Reid (*1971) adds her own slogans and polemical comments to the images she finds in a vast everyday archive of pictures and text fragments from all manner of media. The London artist creates a collage of marginal notes, headlines and illustrations from the tabloid press and scientific periodicals alike, producing an exciting visual array that she has combined in this exhibition to form the multi-part wall installation Take no photographs, leave only ripples. In spite of the occasional undertone of cynicism, the resulting works never elevate themselves above life itself nor deny their roots.

Taiyo Onorato and Nico Krebs (*1979/*1979) take an approach that has obvious references to the history of photography, literature and music. On their road-trip through the United States, they found much that was already familiar – images which, in the course of the past century, have crystallised into the potent “Go West…” myth. The Great Unreal is based on that myth, and yet it conveys a sense of today’s flawed America in search of a new identity.

Ryan McGinley (*1977) and Oliver Sieber (*1966) share an interest in the various forms of youth culture that seek to emulate the lifestyles of previous generations. Whereas figures in Ryan McGinley’s photographs seem to float freely in a powerful rush of colour, Oliver Sieber deciphers the subtle codes and strata of meaning in the relatively small Japanese subculture of young people who dress as sixties mods in their free time. In its reference to what is actually a foreign culture, Oliver Sieber’s JSUBS tells of an idealistic world view that finds its points of reference in the past and lives them out in the present.

An exhibition catalogue will be published by Kodoji Press, Baden:
KARAOKE – Photographic Quotes, edited by Thomas Seelig, 100 pages, with 121 shuffled visual and textual quotes from Ansel Adams to Slavoj Žižek, from Becky Beasley to Oliver Sieber and from William Shakespeare to Marilyn Monroe. Price: CHF 34.-