Double exhibition in the Museo Thyssen-Bornemisza and Fundacion Caja Madrid to explore the intimate relationship between Eros and Thanatos, the mythological figures are set out in an almost narrative sequence, moving forward from innocence to temptation, from temptation to the torment of passion, and ending in atonement and death. Sexual climax and language of ecstasy in works by: Auguste Rodin, John Currin, Tiepolo, Marc Quinn, Antonio Canova, Sam Taylor-Wood, Bernini, Dali', Bill Viola, Cindy Sherman, Paul Cezanne and many others. 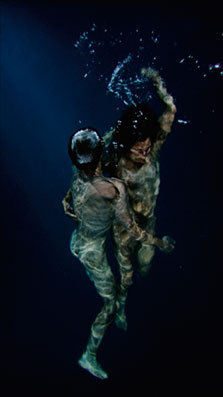 The exhibition takes its name from Les Larmes d'Éros (1961), Georges Bataille's last book before his death and his final contribution on a theme he had researched in depth in Eroticism (1957): the intimate relationship between Eros and Thanatos, between sex drive and death instinct. Bataille took as his starting point the certainty that in the petite mortem of the orgasm we experience an avant-goût - a foretaste - of death. Using images of agony to express sexual climax and the language of ecstasy to depict death was of course not an invention of Bataille's: we find it in Wagner, in Romantic poetry, in Bernini and Michelangelo, in the Spanish mystics and in ancient Greek poetry. Bataille believed he had found a basis for the connection between Eros and Thanatos: both in death and erotic fulfilment we return, from the discontinuity of individual life to the original continuity of being.

For Bataille connections between Eros and Thanatos only made sense within the context of an experiencing of the sacred. Eroticism is a subject of taboo, a prohibition (interdit) which illuminates the forbidden "with a light both sinister and divine: in a word, it illuminates it with a religious light". In eroticism, as in the sacred, prohibition does not exist without transgression. Prohibition excludes the natural, animal impulses, in order to establish the dominion of the cultural. But from the very moment it is formulated, prohibition triggers the return of the excluded, of what had previously been rejected with horror. Animal impulses return in religious sacrifice, during which violence is moulded like some precious yet dangerous material. For Bataille sacrifice is the ultimate stage for eroticism.

To explore the intimate relationship between Eros and Thanatos, the mythological figures are set out in an almost narrative sequence, moving forward from innocence to temptation, from temptation to the torment of passion, and ending in atonement and death.

Chapter 1
According to Hesiod, the god Cronus cut off his father Uranus' member with a great sickle and cast it into the sea. From Uranus' semen mixed with the foam of the waves the goddess Aphrodite (Venus in the Latin version of the name) was born. The ancient Greek painter Apelles painted a Venus Anadyomene which many artists, from Botticelli to those of the present day, have attempted to recreate.

Chapter 2
In traditional versions, the Fall is depicted symmetrically, with Adam and Eve on either side of the Tree of Knowledge and the serpent between them, coiled around the trunk. However, modern artists dispensed with Adam to concentrate on the theme of the complicity between the woman and the serpent, identifying the two with Temptation.

Chapter 3
Sphinxes and Sirens are mythological monsters (of the land and the sea) that have been depicted as the embodiment of the femme fatale. Both are ambiguous creatures: the terrible Sphinx wields a secret power of seduction, while the loveable nymphs and sirens harbour the underlying threat of death in the water.

Chapter 5
Sebastian was a captain in the Praetorian Guard and the favourite of the Emperor Diocletian, who nevertheless ordered Sebastian's archers to execute him with their arrows. The image of the young man tied to a tree, naked and pierced by arrows, with a combination of agony and ecstasy on his face, would eventually become the gay icon par excellence.

Chapter 6
In order to save her country, Andromeda was chained to a rock to be sacrificed to a sea monster. As the hero Perseus was flying back to his homeland after cutting off the Gorgon's head, he spied Andromeda, fell in love with her, killed the monster and rescued her. Andromeda is the female equivalent of Saint Sebastian in the eroticism of domination and submission.

Chapter 7
The culmination of love between two people is a form of bondage or mutual slavery with the lovers struggling to transcend their limits as individuals and merge into a single being. But that fusion does not take place without violence, without the cannibalistic passion of one seeking to devour or vampirise the other.

Chapter 8
In Metamorphoses, Ovid tells of the tragic denouement of the love between Apollo and the Spartan prince Hyacinth, whom the god kills accidentally with a discus. Tiepolo depicted Apollo's grief for his lover in a detached, theatrical way, while other artists took a more intimate approach to this Classical scene of homosexual love.

Chapter 10
The confusion between agony and orgasm, annihilation and ecstasy, is depicted in the figures of two beautiful suicides: Cleopatra and Ophelia. Each meets the end most suited to her character: Cleopatra, turned to marble, Ophelia dissolved in water.

Chapter 11
Magdalene, the repentant sinner par excellence, withdraws to do penance. Whether naked or covered only by her long hair, she weeps and muses before the book, the cross and the skull while alternating mortification of the flesh with sensual indulgence.

Chapter 12
The final frontier in the drama of Eros and Thanatos is a "beheading game" staged by three biblical couples: Salome and John the Baptist, Judith and Holofernes, and the less likely couple David and Goliath. Here the severed head becomes a hunting trophy, a holy relic and a sexual fetish.