The Anarchy of Silence

John Cage and Experimental Art. The exhibition, the major retrospective of the works, thoughts and influences of John Cage, traces the critical developments in artist's career: from his work with percussion (1930s), to the prepared piano (1940s), to chance and indeterminacy (1950s), to new media (1960s onward), through to the political focus that increasingly and explicitly informed the work in the last decades of his life. The show features 200 works by the composer and other artists, including Duchamp, Warhol, Rauschenberg and Nam June Paik. Curated by Julia Robinson. 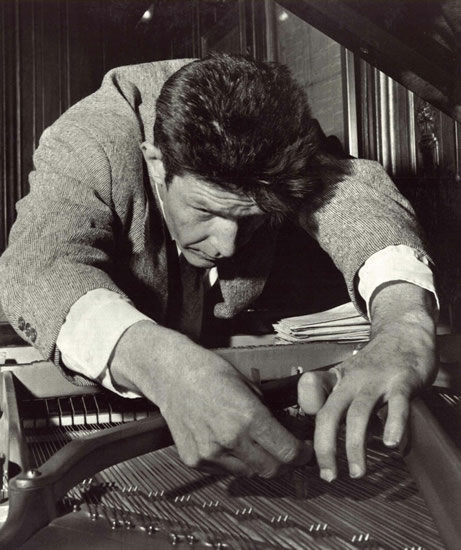 "People Call it Noise - But he Calls it Music"; that was how the Chicago Daily News described the work of a young composer, John Cage (1912-1992) in a review published on 19 March 1942. That "noise", "played" on wood blocks, water containers, tin cans, iron tubes, whistles and other percussion objects, soon gave way to "silence", culminating in the famous score entitled 4’33’ (1952). Just like Andy Warhol’s Campbell’s soup cans, Cage’s silent piece is an icon of popular culture. Much has been said about Cage, but who was he really? Though reference to John Cage is frequently made, he is little understood nowadays, such is the breadth of the conceptual horizon he helped to shape for post-war art. Under the title The Anarchy of Silence. John Cage and Experimental Art, the Museu d’Art Contemporani de Barcelona (MACBA) presents what is not only the largest exhibition devoted to the composer since his death, but also the first to place Cage’s work within the context of the history of music and the visual and dramatic arts. Just months after Cage’s death, the Museum of Modern Art of Los Angeles presented a major retrospective, a travelling show produced while the composer was still alive and under his supervision. Now, nearly two decades later, MACBA presents an historic review put together by a representative from a different generation, the curator Julia Robinson. The exhibition, coproduced with the Henie Onstad Art Centre, Norway, traces a chronological path through Cage’s artistic career as a whole, from the 1930 to the late-80s, and features more than 200 works, including original scores, paintings, sound pieces, films and multimedia installations. Not all these works are by Cage; the show also includes pieces by Marcel Duchamp, Robert Rauschenberg, Andy Warhol, La Monte Young, Nam June Paik and Fluxus, amongst many other artists. Cage not only formed great friendships, he also dynamited the established artistic conventions—risking the exasperation of musicians and audiences alike—and his impact is still felt today. Cage was an all-round innovator, as MACBA seeks to demonstrate here, in a show that forms part of the festival of activities devoted to John Cage and Merce Cunningham that will take place in Barcelona this autumn. Echoing through all these events is the composer’s famous question: "Are we afraid that we have ruined silence?"

"He’s not a composer, but an inventor—of genius". That is how, if we are to believe the legend, the composer Arnold Schoenberg described his pupil. Whatever the truth in this, it is no exaggeration to state that Cage now holds a position in 20th-century art rivalled only by Duchamp, a position that signals sweeping conceptual change. This is due not only to his radical proposals, but also to his great capacity to situate his project theoretically. Cage was musician, but he was also a philosopher, a poet and a visual artist. He established a radical practice of experimental composition that not only changed the course of modern music and dance, but also shaped a new horizon in the art of the new century. Born in Los Angeles, Caged moved to New York in 1942 . By the 1950s he was regularly performing in Europe, becoming internationally renowned for his constant questioning of musical conventions. Over the course of his fifty-year career, which began in the 1930s, Cage created innumerable formal, structural, temporal and technological innovations that have become cornerstones in contemporary thought.

That the works of John Cage "resound" through the galleries of MACBA, Barcelona’s Museum of Contemporary Art, should come as no surprise. Even during his early career, the composer was used to performing in museums and art galleries. Audiences familiar with the latest developments in art have consistently been those most receptive to his ideas. . Cage’s New York debut, in February 1943, featuring a percussion ensemble playing on unexpected instruments, was not at a concert hall or university auditorium. Rather, the performance took place at the Museum of Modern Art (MoMA) in New York. There are many John Cages, but the accent here is on the irrepressible innovator. Accordingly, the show explores the view that Cage changed the course of post-war art specifically through his compositions, his radical reworking of the function of the score, and his offer to all – artists as much as audiences – to take a more active role in the creative act.

The Anarchy of Silence. John Cage and Experimental Art traces a chronological path through the composer’s career, from "all is sound" to "there is always sound", in which each new decade heralds in a new vision (or accomplishment) in his art. It is no coincidence that, over the decades, Cage always sought to understand new advances, such as the appearance of television, as they emerged. Consequently, the exhibition begins with Cage’s first attempts to expand the parameters of percussion music in the 1930s by introducing ever-less conventional instruments (packs of cards, whistles, radios...). The show then goes on to explore such themes as: the development of the "prepared piano" in the 40s, after a chance discovery, and how this instrument became "an effective percussion orchestra under the control of two hands"; Cage’s ground-breaking theory of silence in the 50s, which culminated in the score 4’33’’, after his famous epiphany in the anechoic chamber at Harvard University in 1951 (where he was unable to perceive the silence as the reverberations produced by his circulatory and nervous systems distorted it); his travels in Europe; his writings and lectures, brought together in such books as Silence (1961); his ambitious multimedia collaborations in later decades; and the anarchist beliefs he developed towards the end of his life and which provide the title for this exhibition. The central section of the exhibition focuses on Cage’s "silence", chance composition and indeterminacy (1948-1952), key concerns around mid-way through his career.

Featuring pieces by his contemporaries and artists from later periods, moreover, the exhibition also highlights Cage’s considerable influence in the art world. The works selected include, particularly, original scores, some seen for the first time, as well as examples of the strategic rewriting that he made of 4’33’’ and its many interpretations, such as that performed by the virtuoso pianist and personal friend David Tudor on its first performance. Also included are: the electronic chessboard he made with Duchamp in 1968; Rauschenberg’s White Paintings (1951) and his only explicit collaboration with Cage (Automobile Tire Print, 1953); and Warhol’s silver clouds and Empire (1961). However, of all the artists represented, one in particular stands out as comparable to Cage, as well as someone the composer himself admired: Duchamp. The French artist’s Three Standard Stoppages (1914) seems imbued with the same use of chance and indeterminacy that characterised Cage’s work from Music of Changes and 4’33’’ on. "I must have been fifty years ahead of my time", Duchamp once said jokingly to Cage, a claim the composer could well have made for himself.

The Anarchy of Silence was organised with the support of the John Cage Trust and several other bodies, including the Museum of Modern Art in New York, the San Francisco Museum of Modern Art, the Robert Rauschenberg Foundation, the Getty Research Institute and Fundació Antoni Tàpies, amongst others. Nor is it a coincidence that the exhibition is being staged in Barcelona, since Cage maintained regular contact with Spain and Catalonia. These ties first formed during his stays in Cadaqués, where he spent many summers with Duchamp, frequenting the country’s artistic and intellectual circles. Later, in 1972, he was invited to take part in the Pamplona Meetings. Ten years later, Cage gave an exhibition of his work at the Galería Cadaqués, whilst in 1991, not long before his death, he presented the installation Essay at the Espai Poblenou in Barcelona, an exhibition that was accompanied by a lecture at the Institute of North American Studies.

The Anarchy of Silence. John Cage and Experimental Art forms part of the Cage + Cunningham autumn festival promoted by Barcelona City Council to mark the visit to the city of the Merce Cunningham Dance Company. The festival is organised in cooperation with eight bodies: the Mercat de les Flors, Fundació Antoni Tàpies, BCN 216, the Theatre Institute, Arts Santa Mònica, Conservas, the Teatre Tantarantana and the Museu d’Art Contemporani de Barcelona. The exhibition at MACBA will be accompanied by lectures, concerts, film showings, performances and workshops that will occupy not only the Auditorium, but also the atrium and the exhibition rooms. The participants in these activities will include: the exhibition curator, Julia Robinson; the pianist Margaret Leng Tan, who worked with Cage and is an expert on as well as a leading performer of the composer’s works; the North American violinist Malcolm Goldstein and the German percussionist Matthias Kaul, who will give a joint concert; the experimental poets Eduard Escoffet and Bartolomé Ferrando; and the Merce Cunningham Dance Company, presenting different aspects of their work, from the family dance workshops they give at the Whitney Museum, to a selection of Cunningham’s films and choreographies, especially adapted to the context of the exhibition. Moreover, MACBA will also organise a huge collective performance of Musicircus for Children, a representative piece from Cage’s late period, featuring students from music schools and dancers taking part in the Merce Cunningham Dance Company workshop at the Theatre Institute