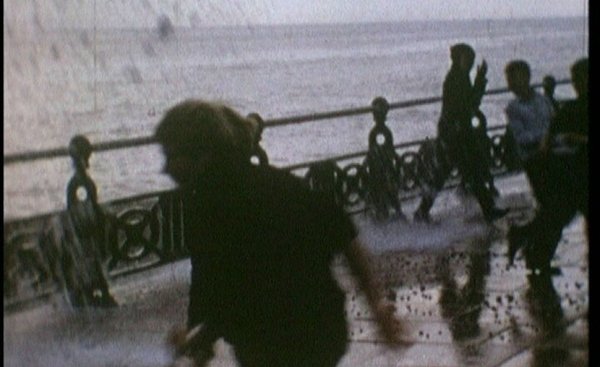 In his works, Deimantas Narkevičius explores the past of the states in the former Eastern Bloc using found footage and autobiographical narratives. His films are reflections on specific facts and historical oddities and are often linked to Lithuania's recent history and also to the Socialist past of other countries under the Soviet regime.

Narkevičius accounts for his interest in the past by referring to his own biography. The upheavals in the wake of the fall of the Iron Curtain left Lithuania bereft of visions and long-term perspectives. According to Narkevičius, the communist state had existed outside western conceptions of history, since its stated goal was the creation of a new kind of man in a new kind of society, which, once attained, would last and prosper forever. At the end of the Cold War, the citizens of Lithuania regained their sense of history, but there were no visions left. Narkevičius considers his individual search for perspectives to be a typical pursuit in post-communist societies. In an unknown terrain, a new future has to be built on the remains of the past by exploring the phenomena of said past that had been hidden by ideology.

Deimantas Narkevičius was born in 1964 in Utena in Lithuania and lives and works in Vilnius, Lithuania. He gained international recognition in 2001 when he represented his country at the 49th Venice Biennial. Even though he is a classically trained sculptor, Narkevičius works with film, video and installation. However, sculpture and architecture are not only of interest to him because of his training, but also because of their signification as monuments. The point of departure for his work The Head (2007) was Narkevičius' interest in the formal language of ideological art. Liberated from its political significance, Narkevičius analyses the ways in which a society's ideology publicly shapes its aesthetics. Consequently, the film Energy Lithuania (2000) depicts the architecture of an electric powerplant as a manifestation and installation of industrial thought and deals with the positivistic romanticism that underlies such an ideology. The film Scena (2003), which was inspired by the modernist architecture of the Contemporary Art Center in Vilnius, then highlights the discrepancy between form and function: the building was initially constructed as an exhibition pavilion, but today's ambitious programme at the CAC has alienated the institution from its original aim of realizing exhibitions 'for everyone'.

An abandoned missile base in Lithuania is the backdrop of the film The Dud Effect (2008), in which Narkevičius simulates the launch of an R-14 rocket. These weapons remained a terrifying threat during the Cold War and were never launched and the artist seeks to educate people about this chapter in history. Narkevičius was inspired by the movie The War Game (1965) by the British director Peter Watkins, which dealt with the West's collective fear of a nuclear strike. Narkevičius observes that this fear was not as tangible in the former Eastern Bloc, and this, to him, is the reason for the East's inadequate historical reappraisal of this era, which informs his films to a large degree. Peter Watkins lived in Lithuania for some time and was interviewed by Narkevičius for his film A Role of A Lifetime (2008). Undermining Watkins' statements on documentaries, Narkevičius combines the interview with images from an amusement park and amateur clips depicting the British seaside resort Brighton. The montage questions the relationship between documentation and representation, between subjectivity and artistic responsibility. Legend Coming True, the film Narkevičius showed at the Venice Biennial in 2001, also uses three narrative planes: the story of a Holocaust-survivor in Vilnius' Jewish Ghetto is joined to a romantic tale about a city and the performance of a Yiddish song.

However, Narkevičius does not simply use found footage to question the documentary genre's claims to objectivity and truthfulness. His eclectic creations are also reminiscent of an inspired painter's works. In his films, Narkevičius does not shy away from evoking a potentially problematic 'nostalgic' atmosphere and from crafting subtexts which dare to pose the 'what-if'-question – no mean feat in our age of constant panicked cultural self-validation. He exposes the tradition and the historicity of narratives that structure our perception of history. The 16mm-film Europa 54°54'-25°19" (1997) consists of a tracking shot which starts in the artist's former house and continues through the city towards Europe's geographical center. The fact that Lithuania is situated exactly in the middle of Europe is part of any Lithuanian's general education and constitutes a curious phenomenon in the ideology of this young country.

Deimantas Narkevičius – The Unanimous Life is the result of a collaboration between the Museo Reina Sofia in Madrid, the Van Abbemuseum Eindhoven, the Kunsthalle Bern, The Hessel Museum at Bard College, New York, and the National Gallery of Art in Vilnius. The exhibition was curated by Chus Martinez and adapted for Bern by Philippe Pirotte.