Colour in the Light. 100 painting on show, complemented by several works by contemporaries like Amiet and Segantini, the intention being to show that in the context of his neo-impressionist colleagues and in the circle of Expressionists, Giacometti has an equivalent place. The focus of this exhibition is Giovanni Giacometti's treatment of light, a constantly constitutive element in the compositions of this artist. 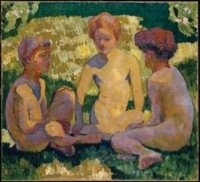 The Kunstmuseum Bern will be showing, together with the Bündner Kunstmuseum Chur, a retrospective of Giovanni Giacometti’s painted works. This artist produced paintings that emanate a powerful coloristic force. Around a hundred works of outstanding quality were carefully selected for the exhibition, revealing his brilliant artistic stature.

The focus of this exhibition is Giovanni Giacometti’s (1868–1933) treatment of light. Be it luminous daylight, obscure twilight, or the dark of night broken by the radiance of the moon or the artificial glow of lanterns or lamps – light is constantly a constitutive element in the compositions of this artist. In some of his letters he mentioned the pivotal significance that it had for his painting. He wrote that his aim was to “penetrate the essence of coloured light”, and he stated that “the fight to capture light” was purely and simply “the driving force” behind his work. Giacometti strived to render changing light conditions and intensify the impact of light and colour by means of juxtaposing brushstrokes or dabs of pure, often complementary colours. His artistic goal was ruled by the deep conviction that “for the painter everything exists by virtue of light”.

Bathed in Glittering Light
Giacometti succeeded repeatedly in capturing the magnificent atmosphere pervading the alpine world and created artworks that impress with their brilliant coloristic force. He fascinates his viewers by bathing the mountains and landscape panoramas of Bergell and Maloja – where he had his summer studio – in glittering light. Besides landscapes, the exhibition also shows admirable portraits of his family – evidencing blissful family life in Bergell – and of [well-known] people who were close to him.

A Painter of International Stature
Giovanni Giacometti made a significant contribution to innovation in early 20th-century Swiss painting. In 1891 after having studied in Munich and Paris, Giovanni Giacometti returned to Stampa in Bergell where he developed his outstanding style of painting. Becoming acquainted with Cuno Amiet in Munich, they remained bound by a close, longstanding friendship. Giacometti was a great admirer of his early mentor Giovanni Segantini, a landscape painter of alpine scenes. His own artistic reputation was often, undeservedly, overshadowed by that of his ingenious son, the sculptor Alberto. It is an undisputed fact that Giacometti reigns among the leading Swiss artists who, between Impressionism, Post-Impressionism, and Fauvism, assimilated and further developed the fundamental innovations of modernism.