For his project the artist has conceived 2 new exhibitions, "Virtual America" and "New Painting from L'Atelier Rouge". Shown together as two interlacing but autonomous presentations, they create a non-dialogue that has become the artist's trademark in exploring the nature of creativity. The result is a stratification of disconnected surprises rather than any logical consequentiality. 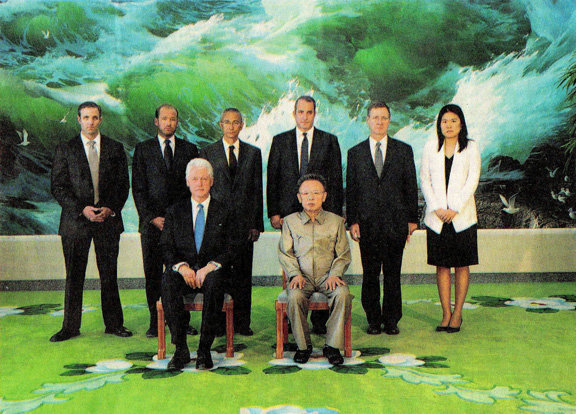 For his latest project Marco Boggio Sella has conceived of two new exhibitions, "Virtual America" and "New Painting from L'Atelier Rouge", to be presenting simultaneously as the artist's third and fourth consecutive solo shows in New York. By presenting two solo shows at the same time Boggio Sella highlights the relative nature of the creative process while drawing attention to the serial relationship within his own bodies of work. Shown together as two interlacing but autonomous presentations, Boggio Sella's project creates a non-dialogue that has become the artist's trademark in exploring the nature of creativity. The result is a complex stratification of disconnected surprises rather than any logical consequentiality.

In "Virtual America", Marco Boggio Sella recollects cultural clichés and personal experiences to illuminate what holds together the contradictions assumable under the concept of America. The largest piece in the show is a collection of images printed on Dura-Lar, a synthetic material commonly used for its characteristic transparency. Stacks of 30 sheets (5×10 feet in size) some printed some not, are secured to the wall of the gallery by leaning 14 feet-long,182 pound metal beams. Stacking Dura-Lar sheets result in a mirroring quality that conveys to the printed images a particularly immaterial feel. The structural absurdity of the installation is paired with the oddity of the represented images. A concert by American Idol winner David Cook during an All Star baseball game is staged in the middle of the stadium and enhanced by a special effects of cannons spitting big clouds of fire. The setting for the official picture of a meeting between former American president Bill Clinton and North Korean leader Kim Jong Il is decorated by a mural representing a giant wave. The strangeness of the two images creates a dialog specific in its absurdity, yet based on real facts. As in many cases today, the real outplays any fiction with surprising power

Several sculptures from the "Virtual America" series continue in this vein . One is composed of a readymade of a hunting camouflage suit laid on a sculpture base modeled as a natural terrain. The base, reminiscent of a classical sculpture, provides a fictional context for the readymade, leaving room for a narrative interpretation. The suit becomes a strange icon of death while its foliage decoration opens a dialog on the natural/artificial with the sculpted ground upon which it is placed. An oversized sculpture of a cotton swab continues Boggio Sella's investigation into art historical vocabularies of scale (the size of the enlargement is somehow smaller than what would be typical of the Pop process) and turns a petite household item into an estranged object. Through the transformation it acquires a different relationship with the human body reminding one of other artifacts of common use such as a primordial weapon or a canoe paddle.

Boggio Sella's other exhibition on view is from "L'Atelier Rouge", an ongoing series of works inspired by Matisse's eponymous painting, where Boggio Sella reinterprets familiar images from art history, decoration, the history of photography, and uncopyrighted images used by designers and advertisers. A new group of six large paintings from this series are inspired by documentary photographs of the 1920's and are painted on a surface that is textured by a layer of pasta creating a secondary shadow image over the first. This technique creates an image inside an image, the former visible trough the color and the latter thanks to the interplay of the pasta and the extremely glossy quality of the surface. The emblematic use of Matisse’s "L'Atelier Rouge" is a reference to the artistic practice and at the same time a display of the creative "emergency" which is the subject of the painting. In Matisse's image only the paintings in the studio are rendered in full color; the studio itself, the creative environment, is completely painted in red.