Adapting the structure of a three-act chamber play to an exhibition of visual art, Conversation Pieces presents a diverse range of artists currently or previously represented by the gallery, engaging them and their artworks in a series of intimate and dynamic conversations. A performance of 3 acts, staged in a small space with a minimal cast and practically no stage set. Act I (until 6 February 2010) Scene 1: Tim Lee, Hans-Peter Feldmann / Scene 2: Rodney Graham, Martin Creed / Scene 3: Roger Ballen, Anri Sala. Curated by Jens Hoffmann. 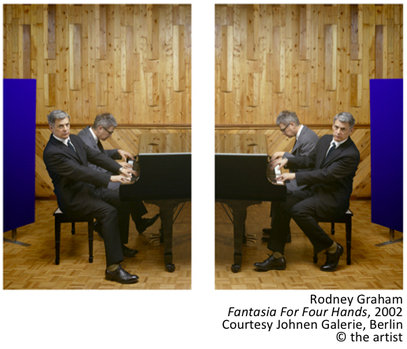 Adapting the structure of a three-act chamber play to an exhibition of visual art, Conversation Pieces presents a diverse range of artists currently or previously represented by Johnen Galerie, engaging them and their artworks in a series of intimate and dynamic conversations. While focusing on the theatrical aspects of the works, the exhibition will also reflect on the display of contemporary art and its relationship to the staged or dramatised. Each act is four weeks long and represents one part of a larger, developing narrative. Intermissions will last one week. A chamber play is a performance of three acts, staged in a small space with a minimal cast and practically no stage set. It depicts the inner dramas of the characters—their emotions, passions, and desires—and centres on non-political or personal subjects such as historical fiction and domestic life.

The title of the exhibition, Conversation Pieces, traditionally refers to a particular style of group portraiture popular in Britain in the 18th century. These paintings—by artists such as William Hogarth and Joseph Highmore–typically show members of a family, friends, members of a social group brought together in an informally staged environment of conviviality. Conversation Pieces not only considers the specific art-historical typology of the conversation piece, but also the literal conversations among artists and artworks that an exhibition is intended to generate. Among these relations or dynamics are the theatrics of the exhibition space and the dialogues that arise there, the concept of the exhibition with its specific selection and arrangement of artists and artworks, and ultimately its broader understanding as a form of conversation piece.

The chamber play premise for Conversation Pieces in part arises from the gallery’s proximity to one of Germany’s most important theatre, the Deutsches Theater.
Artefacts such as posters, program booklets and performance photographs of historically important chamber plays performed at the Deutsches Theater since its inauguration in 1883 will also be on view in the gallery. The exhibition is also a response to the gallery architecture: an intimate, 19th century residential building featuring a noble facade, generous salons, and large backyards that are characterized by simplicity and functionality. The historical origins of the chamber play coincide with the architectural style of the building, both reflecting a growing focus at the time on domesticity and introspection.