Removed from the Crowd

A curatorial/art-historical piece based developed through an ongoing research that considers the phenomenon of the New Artistic Practice in the Socialist Republic of Croatia during the 1960s and 1970s outside the context of the analysis of the actual artistic production of that time, involving new elements and fragments with each new presentation. With contributions by Jens Kastner, Waler Seidl, Marco Scotini, Artur Zmijewski, the editors Ivana Bago & Antonia Majaca and many others. 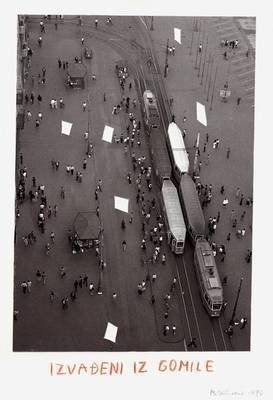 Removed from the Crowd / The Fate of Outer Planets is a curatorial/art-historical piece based developed through an ongoing research that considers the phenomenon of the New Artistic Practice in the Socialist Republic of Croatia during the 1960s and 1970s outside the context of the analysis of the actual artistic production of that time, involving new elements and fragments with each new presentation.

The first phase of the long-term project was the publication Issue-ing the Revolution published as the 83rd issue of the Life of Art Magazine/Zivot umjetnosti with contributions by Jens Kastner, Waler Seidl, Marco Scotini, Maroje Mrduljaš & Srećko Horvat, Jelena Vesic & Dušan Grlja, Sezgin Boynik, Artur Zmijewski, Maja & Reuben Fowkes, Hedvig Turai and the editors Ivana Bago & Antonia Majaca (hart.hr/izdanja/zivot-umjetnosti), while the second phase eveloved as the educational program Kustoska platforma comprised of 10 monthly seminars with the students of art history in Zagreb initiated in Spring 2008 and focusing on the history of curatorial and exhibition practices Croatia.

The first 'staging' of the project, presented earlier this year in Belgrade in the framework of the exhibition Political Practices of (Post) Yugoslav Art focused on the modes of collaborative work of artists and the forms of self-organisation while the second one, at ŠKUC Gallery, includes a new chapter focusing on progressive curatorial strategies and innovative exhibition models during 1960s and 1970s.

Fragment 1: New Collective Practices - Artists' Association Beyond Manifesto and Program stems from a consideration of the three-year activity of the Podroom Working Community of Artists. Podroom, an artists-led space initiated by Sanja Ivekovic and Dalibor Martinis, was a working and exhibition space that between 1978 and 1981 brought together the key figures of the New Artistic Practice. A transcript of a conversation (a working meeting) held in Podroom and published in the 'catalogue-journal' First Issue (1980) serves as a point of departure for the rendering of narrative about self-organised artistic initiatives and the history of associations from Gorgona Group at the beginning of the 1960s to the establishment of the artist –run PM Gallery in Zagreb in 1981. What is common to all the initiatives, irrespective of their duration, is the specific, non-programmatic and organic manner in which they group together around an only adumbrated common goal. The fragment focuses on temporary manifestations of collectiveness, on models of 'being singular plural' or more exactly, on being-with as a search for a different understanding of the relation between individual and collective, but also for the point of a collective itself and the possibility of a joint programme.

Fragment 2: New Curatorial and Exhibition Practices brings the focus to innovative curatorial and institutional practices with the special attention given to the projects initiated and curated in the 1970s by Ida Biard in Zagreb and Paris. Selected curatorial projects, as well as institutions and informal spaces in which they took place, are here not seen merely in the role of mediators who present artistic products to the audience, but as the active protagonists and initiators of innovative approaches to contemporary art, whether these concern the New Tendencies movement, early conceptual art of the 60s or the New Artistic Practice of the 70s.

The title Removed from the Crowd (taken from the title of a piece by Mladen Stilinović from 1979) thus becomes a signifier not only of the differentiation of the 'associated individuals' as against the ideologically propagated collectivity but also a signifier of the actual methodology.

Accordingly, the intention of the project is not the creation of a 'convincing' and scientifically well-grounded historical or art-historical narrative - it aims rather to indicate an associative cartography functioning as memory script, a map that selects the facts about processes, methodologies and situations considered to be relevant for us today as well as from a series of speculations derived from the enlargement of details, deliberate omissions, arbitrary connections, all in the aid of articulating a different viewpoint, a temporary and unstable truth through a different 'performance' of the writing of the history of contemporary art.