From Shop Window Mannequin to Media Star. The current condition of image proposals and the construction of subjectivity by means of appearance are essential themes of the early 21st century. The exhibition aims to reveal the concepts and strategies inherited from Dandyism found in the work and the attitudes of contemporary artists, as well as the perdurance of the iconography and themes from Dandyist literature. Works by 35 international artists, curated by RMS La Asociacion. 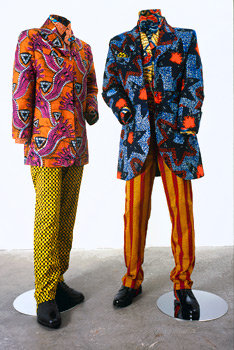 Sur le Dandysme aujourd'hui attempts to show how many of the concepts and strategies developed by nineteenth-century dandies can be found in the work and attitudes of certain contemporary artists, and how the iconography and themes of the literature of dandyism are still significant. To do so it takes three landmarks in the unusual history of dandyism—George Brummell, Charles Baudelaire and Oscar Wilde—and studies the way in which each of their contributions are reflected in the art of recent decades.

Brummelliana: This part is devoted to Brummellian dandyism which, according to Giorgio Agamben, was characterised by granting things a degree of irreality that exceeded the use and exchange values of the commodity and drew them closer to the work of art. By virtue of its almost complete de-subjectivisation, the dandy tended to become reified, transformed into an unreal commodity, a pure appearance of himself—that Brummell-mannequin on public view in the window of his club on the London Mall.

Following Hal Foster's observations regarding some artists of the eighties and taking Duchamp and Warhol as leitmotifs, this section of the exhibition presents the ready-made and appropriation as processes related to the de-subjectivisation of the dandy. It deals also with the contemporary artist as a self-publicised commodity.

Baudelairiana: In 1863 Le Figaro published Charles Baudelaire's essay 'The Painter of Modern Life'. The essay analysed customs and forms of modern life taking as an excuse the work by Constantin Guys, an obscure illustrator who is only referred to by the initials M. G. With Baudelaire the term dandy went from being a noun to an adjective. This section encompasses artists who concentrate on youth subcultures of which dandyism is considered a precedent.

Wildeana: In 1900 Oscar Wilde died an early death in Paris. Was he the last dandy or one of the first media stars? He was better known for his strange way of dressing and his witticisms than acknowledged as an author in the early stages of his career. Wilde became a fan phenomenon during his tour of the US in his youth years. He also was a marked egotist. Wilde wanted to become a work of art and created his own character. This section is devoted to the theme of the artist as Narcissus, media star and work of art.