...on the eastern front

Video art from central and eastern europe 1989-2009. The exhibition examines the effects of the changes taking place in the region of the former Soviet Bloc on the individual and on various groups of society from the aspect of socio-psychology. It focuses on the human dimensions of the transition beginning from the end of the 80s and on, micro-processes involved. The artists convey numerous individual viewpoints, which provide a personal tone to the aesthetic and critical discourse concerning the political changes. With: Yael Bartana, Adrian Paci, Radek Community, Anri Sala, Artur Zmijewski and many others. 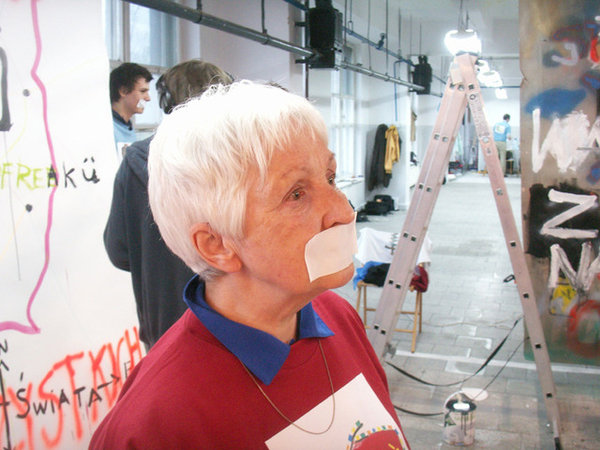 The exhibition examines the effects of the changes taking place in the region of the former Soviet Bloc on the individual and on various groups of society from the aspect of socio-psychology. It focuses on the human dimensions of the transition beginning from the end of the eighties and on, micro-processes involved.

The period since the demolition of the Berlin Wall is characterised by democratisation throughout the region. However, the rate, timing, technique and extent of this transition vary from country to country. Consequently, the challenges of transition are addressed in a multiplicity of ways by individuals, groups and by society as a whole. The exhibition uses a psychological viewpoint to examine the relations and dynamics of the various groups of society and the individuals.

Video art proved to be a perfect tool for documentation and analysis of the radical political, social and economic changes, and it began to develop and become widespread in the region during the same period of changes. The exhibition takes advantage of this coincidence, when using this medium to introduce the processes dominating the recent past of the region.

As opposed to the conventions of film production, which required complex technical apparatus, video art appearing during the 60s represented a novel alternative. With to the mass appearance of easy-to-handle, so-called portable video cameras and VHS, from the 80s increasingly wider groups of amateurs and professionals were able to record motion pictures. After photography and film, the genre of video art also offered novel possibilities of extending – and manipulating – private and historic remembrance. The methods of forming public opinion and influencing the public have changed irreversibly, and the commencement of an information society was not simply an accompanying event of the political changes taking place in the region, but the promoter of such changes.

The exhibited works addressing society with severe criticism, document, analyse and contextualise this complex region and period. But rather than offering definite answers, they probe issues that were typically avoided or swept under the carpet in the public common discourse of the countries in the region.

What is our attitude to our historical past? What are the consequences of the changes in national identity and national stereotypes? How can individual lives be carried on amidst all these rearrangements in society? What intergroup relations and conflicts have played a defining role in the last twenty years?

The artists convey numerous individual viewpoints, which provide a personal tone to the aesthetic and critical discourse concerning the political changes and the period of transition.

The exhibition entitled ...on the eastern front is a thematic selection from the material of the digital reader Transitland – Video Art from Central and Eastern Europe 1989–2009, which includes a total of 100 single-channel video works, produced in the period 1989–2009, and reflecting the transformations in post-Socialist Central and Eastern Europe. The Transitland archive is not only the widest-spanning presentation of video art from Central and Eastern Europe but also a unique attempt to address and reflect upon an extensive period of transformation and changes. This archive of 100 works is capsulated in so-called video jukeboxes, which are freely accessible at the Ludwig Museum Budapest for research and individual viewing.

The Ludwig Museum published the 300-page English language reader entitled Transitland. Video Art from Central and Eastern Europe 1989-2009 in 2009. The authors are well-established professionals in the region, approaching the video art of post-Socialist countries from various aspects, so demonstrating its fecundity and vividness. The volume also contains a separate section providing a list and short description of the 100 videos appearing in the Transitland video archive. The publication was edited by Edit András.

Ludwig Museum Museum of Contemporary Art
Ludwig Múzeum–Kortárs Művészeti Múzeum
Komor Marcell u. 1. H-1095 Budapest
Hours:
Tuesday-Sunday: 10 am - 8 pm
Closed on Mondays
On the last Sunday of every month, free admission for all visitors under 26, as well as for maximum 2 close relatives accompanying children under 18.