In '1991-1994, Improbable History' Sean Landers presents an overview of his oeuvre including text works on paper, photographs, paintings, sculptures, and diaristic calendars, with a focus on his performative videos shot in the studio. Stephen Prina exhibits a new suite of monochrome paintings on window blinds; the title 'Modern Movie Pop' namesake is shorthand for the artist's newest musical score to date. The new season of The Front Room operates at a different rhythm, with exhibitions lasting anywhere from a day to a few weeks. The first upcoming shows are with Xavier Cha and Torbjorn Rodland. 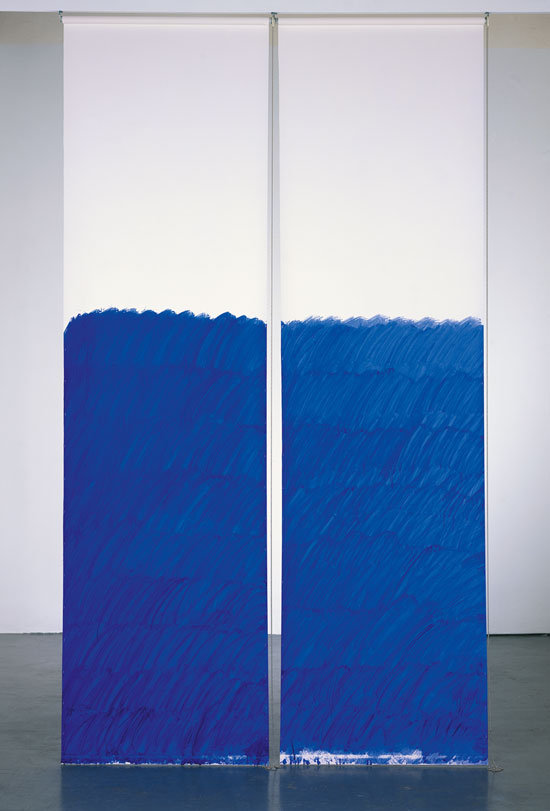 In January 2010, the Contemporary Art Museum St. Louis presents the first survey of the early work of New York-based Sean Landers in the United States. Since the 1990s, Landers’ work has been one of the most captivating enterprises in contemporary art, as a practice that has long gamed sincere attempt to map the boundaries of human-nature and the self.
This exhibition proposes that Landers’ formative body of work, produced from 1991-1994, was one that defined the artist, the persona, and the conceptual conceits that he has cultivated and enriched over the course of his twenty-year career. The show presents an overview of the artist’s oeuvre including text works on paper, photographs, paintings, sculptures, and diaristic calendars, with a focus on his performative videos shot in the studio. Across this diverse range of media, Landers presents a holistic set of themes and methodologies, key among them a sincere and unflinching presentation of the artist’s consciousness. Weaving stream-of-thought text or soliloquizing on lo-fi video, Landers presents the artist as an object of study: from the earliest yellow legal pads featuring as autobiographer the fictional artist Chris Hamson, to the reclaiming of the persona by Landers’ own voice. In this relentless articulation of emotion, at its most base and its most noble—from self-loathing, self-doubt, and humiliation, to humility, empathy and true love—Landers’ explores the process of artistic creation through the invention, and simultaneous revelation, of the self.

Sean Landers was born in 1962 in Palmer, Massachusetts, and he lives and works in New York City. He has exhibited widely in the US and internationally. In addition to his 2004 solo exhibition at Kunsthalle Zürich, Landers has been included in shows at Whitechapel Art Gallery, London; Whitney Museum of American Art, New York; Museum of Contemporary Art, Chicago; Kunstverein, Hamburg; the Contemporary Arts Center, New Orleans; Bard College, Annandale-on-Hudson, New York; Wattis Institute for Contemporary Art, San Francisco; the Denver Art Museum; and White Columns, New York; among many others. His work is included in numerous museums and public collections including the Tate Museum of Art, London; the Whitney Museum of American Art, New York; Seattle Museum of Art, Seattle; Los Angeles County Museum of Art; Denver Art Museum; the Walker Art Center, Minneapolis; and the Brooklyn Museum of Art. He is represented by Friedrich Petzel Gallery, New York.

In January 2010, the Contemporary Art Museum St. Louis presents a new exhibition by American artist Stephen Prina. For thirty-years, Prina has played with the role of the artwork within cultural, art-historical, institutional, and personal networks. While his practice encompasses painting, installation, photography, and film, he has also released over a dozen music albums under his own name and as part of the band The Red Krayola. Having kept his artistic interests separate from his musical pursuits for decades, Prina has recently begun experimenting with new combinations and relationships—as he explores personal and public eulogies, and the relationship between artistic intentions and the afterlife of objects.

The exhibition’s namesake is shorthand for the artist’s newest —and most complex— musical score to date. Appropriating Anton Webern’s Koncerto Opus 24 for Nine Instruments, Prina re-inserts his own pop songs and covers from the last fifteen years. An eleven-musician score in three movements, Koncerto for Modern, Movie and Pop Music for Ten Instruments and Voice (2009) represents a powerful poetic metaphor for the cross-pollination of personal, art historical, and musical narratives that have long suffused Prina’s practice.

At the Contemporary, Prina presents a new suite of monochrome paintings on window blinds, a continuation of his ongoing series of diptychs titled Exquisite Corpse: The Complete Paintings of Manet (1988-2008), and a recent room installation—arranged though Prina’s lens into a system of fragmentations and reveals. The artist has long taken the position that past is never really distinguished from present—that history is always relevant—and that the specter of Modernism continues to surface. Coupling his monochrome blinds, suspended from the museum’s grand-scaled performance gallery, with what he calls a “movable stage spectacle” in a large adjacent gallery, Prina orchestrates a taxonomy of his art that, at its heart, reveals an attention to the consonant spaces of painting, film, architecture, and music.

Stephen Prina (born in 1954 in Galesburg, Illinois) has since the early eighties exhibited in galleries and museums worldwide. Surveys of his work have been presented at Museum Boijmans-van Beuningen Rotterdam; Frankfurter Kunstverein; Staatliche Kunsthalle Baden-Baden; and Centro Andaluz de Arte Contemporaeno, Sevilla. One-person exhibitions have been mounted at Kunsthall Bergen, Art Pace, San Antonio; Museé d'art Moderne et Contemporain, Geneva; P.S.1 Museum, New York; The Power Plant, Toronto; The Renaissance Society at the University of Chicago; as well as in Los Angeles, Cologne, Düsseldorf, London, Paris, Seoul, and Vienna. He has participated in Documenta IX, Venice Biennale XLIV, 51st Carnegie International, the 2008 Whitney Biennial, and in group exhibitions at Museum of Modern Art, New York, and Museum of Contemporary Art, Los Angeles. His concerts of have been staged in venues around the world and recordings are available on the Drag City and organ of corti record labels. Prina lives and works in Los Angeles and Cambridge, where he is Professor of Visual and Environmental Studies at Harvard University. He is represented by Galerie Gisela Capitain, Cologne, and Friedrich Petzel Gallery, New York.

The Front Room
Short exhibitions by artists and others

The Contemporary Art Museum St. Louis is pleased to announce a new season of The Front Room. Running alongside the Main Galleries, The Front Room operates at a different rhythm, with exhibitions lasting anywhere from a day to a few weeks. These reactive, nimble, provisional, and experimental exhibitions test the boundaries of conventional programming and echo the elasticity of contemporary culture.

Xavier Cha (January 22 - 31)
Xavier Cha's performances, objects, and videos revolve around systems of social exchange and hierarchies of physical and psychological space. Her works subtly distort these ideologies by re-contextualizing culture, desire, the individual, and community. A frequent collaborator, Cha has invited dancers, musicians, mystics, or clowns — among many others — not only to participate in her projects, but to become the protagonists of the work. She inaugurates this season’s Front Room with a week-long performance.

Torbjørn Rødland (January 22 – February 28)
In his attempt to dissolve the traditional genres of portraiture, still-life, and landscape photography, Norwegian artist Torbjørn Rødland creates perverted juxtapositions that lead viewers to question their own process of looking. Mute, flat, but somehow still seductive, his photographs inject an uncanny blankness into recognizable images. On the outside-wall of The Front Room, he presents a suite of recent works based on the British comic strip character Andy Capp, a figure sometimes evoked by progressive Norwegian politicians to represent the “common man.”

Greg Parma Smith & Zin Taylor (February 3 – 14) Greg Parma Smith is a New York-based painter who takes equally from the tradition of still-life painting and from generic commercial photographs of commonplace objects. Masterfully painted in the highest quality oil paint, Parma Smith’s canvases invoke the joy of painting but still contain the plastic numbness of design, decoration, and consumption, and if they seem to promise creative fulfillment, they are only hermetic factures. While Smith presents new work in The Front Room, Brussels-based Canadian artist Zin Taylor presents sculptures and videos based on the age-old process of making bread. Through use of a wide range of media, much of Taylor’s work explores the many layers of growth involved in the development of forms.

David Musgrave & Erin Shirreff (February 17 - 28)
Underlying the work of British artist David Musgrave are economical images of human or animal shapes that seem ancestral, primitive, or paranormal. His graphite drawings involve a meticulous precision and contain subtle evocations of images embedded within images. His aluminum and resin sculptures bring his anthropomorphic yet essentially abstract inventions further into physical space. New York artist Erin Shirreff uses a wide range of media, including photography, video, and sculpture. For her contribution to The Front Room, she photographs clay sculptures in her studio to create new images of monolithic stone-like forms.

Pablo Pijnappel (February 20 – 21)
Brazilian artist Pablo Pijnappel makes films and slide-projections that explore the many facets of personal narratives. He combines alluring anecdotes about his own personal family history with an erudite understanding of the power of images to create work that forces viewers to reflect on the contingencies of time, place, and the changing state of our everyday. In The Front Room, Pijnappel presents a screening of his film Andrew Reid.

Jochen Lempert (March 3 – April 18)
After training extensively as a zoologist, German artist Jochen Lempert began taking photographs of the animal world, merging his scientific expertise with a more formal, visual, and poetic sensibility. Hung in a grid on the outside wall of The Front Room, the series of black-and-white portraits of birds portray living creatures as forms suspended in space.

Roman Schramm & Haris Epanimonda (March 3 – 14)
Berlin-based artist Roman Schramm makes photographs and videos with a lens focused on the slightly-altered objects of everyday life, infusing the traditional genres of portrait and still life with a self-reflexive process of depicting the medium of photography itself. Obscuring the hard edges of commercial—or “masculine”—images, Schramm presents new and recent work in The Front Room. Cyprus-born, Berlin-based artist Haris Epaminonda presents recent films and books from The Infinite Library project that juxtapose the highly modern and the ancient as time and memory compressed. Working in a mode of assemblage, she often processes the content of found images and footage oriented towards the definition of space and the evocation of poetic encounters.

Leslie Hewitt (March 17 - 28)
Currently an artist-in-residence at Harvard University, New York-born artist Leslie Hewitt is drawn to the way we remember images and objects. Her photo-sculptural works ask how the human mind accesses, reframes, and changes the images that it remembers over stretches of space and time. Distinctively personal, Hewitt’s practice also involves a commentary on popular culture and the circulation of socially and politically charged imagery. She presents a new video installation in The Front Room.