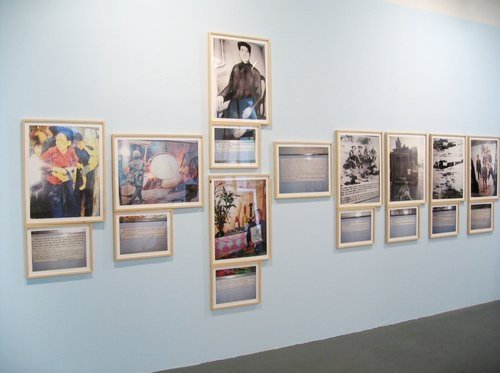 Route 1: R for Replicant is the first exhibition in an annual series to be drawn from the 101 Collection based in San Francisco. This exhibition aims to investigate contemporary image production by exploring the issue of how images shape and challenge our understanding of reality, and more specifically our understanding of American identity.

The starting point of the exhibition is the Voight-Kampff machine, an imaginary mechanism of interrogation used to distinguish humans from replicants (or androids), proposed by the American writer Philip K. Dick in his 1968 novel Do Androids Dream of Electric Sheep? and later visually represented in Ridley Scott's 1982 science-fiction classic Blade Runner. The Voight-Kampff test involves a series of questions intended to elicit emotional reactions in order to detect a capacity for empathy. The test's result becomes ambiguous however, when it is conducted on an experimental replicant model whose artificially implanted memories allow her to generate empathic responses. The metaphor of the test thus suggests the possible interchangeability of the artificial (memory) and the real (experience), and ultimately questions the very notion of existence and reality. If the replicant is not merely a simulation of a human but rather a being that experiences an alternative reality, then perhaps images do not provide replicas of reality, or fake realities, but alternative realities that might or might not be experienced.

Featuring works that comment on contemporary image production through interventions related to history, narrative, memory, and experience, the exhibition proposes an investigation of the "materiality" of these images by tackling the issue of what images can or cannot make visible. "Materiality," in the context of this exhibition, does not refer to the works' physical presences through print, drawing, or film, for instance, but rather to an understanding of images – recycled and accelerated to the point of seizing their own means of production – becoming actual things, interfering in real life, affecting it, and even altering it. Using various strategies, whether playing with iconographies, borrowing cinematic imagery, commenting on popular culture, referencing and reconstructing history, reorganizing existing objects and images, or storytelling via documentary, the artworks in this exhibition create new meanings beyond their connections to existing realities. History and stories, documentary images and staged images, actual locations and invented scenes are all parts of the same regime of truth.

The structure of the exhibition is intended as a kind of variation on the Voight-Kampff machine. Artists/artworks, audiences/artworks, and artists/audiences operate as both inquisitors and suspects. While artists examine American identity by proposing alternative realities, audiences' perceptions of received ideologies are challenged, and the notion of reality and truth become uncertain through image interpretations.

Whereas the humorous title of Dick's novel Do Androids Dream of Electric Sheep? upholds the traditional assumption that androids are machines and run on electricity, the renaming of androids to replicants in Blade Runner, given the latter term's associations with microbiology and genetic engineering, redefines them as alternative beings, different than humans. This redefinition of their characters actually points to a constellation of inquires regarding identity: the identity of the replicants, of us as readers and viewers, and of human beings in general. Pushing these inquires a step further, this exhibition questions not only the identity of America as presented in the works, and the identities of today's artists as image makers and cultural producers, but also our own identities as consumers and observers of the visual culture that we encounter in our daily lives.

Route 1: R for Replicant was curated by Xiaoyu Weng. Weng received her M.A. in Curatorial Practice at California College of the Arts (2009) and holds a B.A degree in Art History and Art Administration from China Central Academy of Fine Arts, Beijing (2003). Her study at CCA was supported by the Asian Cultural Council Starr Foundation Fellowship and the Carmen M. Christensen Graduate Scholarship from CCA.

Lead sponsorship for Route 1: R for Replicant has been provided by the Artnow International Foundation.

Curated by Harrell Fletcher as part of The Magnificent Seven, this unique, biographical exhibition features artworks by the artist's mentor, family member and friend Michael Bravo. Selections From the Life and Work of Michael Bravo presents paintings, drawings, photographs, prints, and sculptures from the artist's large body of work produced over the past fifty years. The exhibition also highlights a wide range of personal objects that Bravo created for his family including wooden ships, airplanes, and mobiles, as well as family snapshots and other ephemera from the artist's life and career.

When Harrell Fletcher was still a baby, Michael Bravo married his older sister Sandra. Noticing early on that Bravo was an artist, a builder, a musician, and a generally unorthodox person different from everyone else in the family, Fletcher wanted to be just like him. Bravo was well-liked among the family, often making toys for the kids, doing work around the house, talking and being friendly with everyone. He took Fletcher fishing, taught him to sing songs, and showed him how to do lithography at an early age. Bravo's artwork also made an early impression on Fletcher; he recalls being confused and intrigued by the abstract, strange, and varied pieces.

After Fletcher's sister and Bravo divorced when he was ten years old, Fletcher did not see the artist again until he was 18 and enrolled in college at Humboldt State University where Bravo was an instructor. Quickly, Fletcher began taking every possible class with the artist—beginning, intermediate, and advanced drawing, and lithography—in every term for three years. It was strangely familiar for Fletcher to now be an official student of the artist who had been such an important role model to him while growing up. After leaving school at Humboldt State, the two only saw each other occasionally over the next decade. Fletcher eventually attended graduate school at California College of the Arts—the same place where Bravo had received his BFA and MFA degrees, as well as where he met Fletcher's sister when she was an undergraduate at the school.

The two artists' lives continued to coincide in interesting ways. In the same year that Fletcher took a tenure track job teaching art at Portland State University, Bravo retired from Humboldt State University after over twenty-five years of teaching. The trajectory of Bravo's life and artwork served as guideposts for Fletcher as he pursued his own career as an artist. Bravo instilled in him the idea that he could build a life around what he valued doing by focusing on those activities. While the two artists' work is very different, Fletcher appreciates Bravo's diverse, idiosyncratic and very personal style and is indebted to him for the possibilities that he introduced throughout the artist's life.

Michael Bravo was born in Oakland, California and raised in the outskirts of Sacramento. The artist's work has been included in many group exhibitions at institutions including San Francisco Museum of Modern Art, Palace of the Legion of Honor in San Francisco, Oakland Museum of Art, Downey Museum of Art, and Las Vegas Museum, as well as numerous group and solo exhibitions at other venues throughout the United States. He received both an M.F.A. and B.F.A. from California College of the Arts. From 1973 to 2004, Bravo was an instructor at Humboldt State University and continues to live in Humboldt County, California.

Born in 1967 in Santa Maria, California, Harrell Fletcher has worked collaboratively and individually on a variety of socially engaged, interdisciplinary projects for over a decade. His recent traveling exhibition The American War, originated in 2005, has been presented in many art institutions across the United States including White Columns, New York and The Center For Advanced Visual Studies MIT in Boston. A book version of Fletcher's ongoing project Learning To Love You More, a participatory web site started in 2002 with Miranda July, was published in 2007. Fletcher received a B.F.A from San Francisco Art Institute in 1990 and an M.F.A. from California College of the Arts in 1994. In 1996, he received a certification in Ecological Horticulture from University of California, Santa Cruz. Fletcher is a Professor of Art at Portland State University in Portland, Oregon where he lives.

Once upon a time, there was a man who was an entertainer, businessman, bison hunter, and American soldier. He could mend disputes among unruly cowboys, Native Americans, women sharpshooters, and soldiers from faraway lands. His name was Buffalo Bill. One day, inspired by his adventures, Buffalo Bill decided to tell his stories to the rest of the world. The result, The Adventures of Buffalo Bill, were a theatrical and spectacular portrayal of the American West. They hinted at the unique conditions for the creation of an American identity, which was driven by the constant pursuit of new frontiers, the acceptance of cultural differences, and the desire to make all follow one voice.

His own tale had began in 1883 in a small town in Nebraska called North Platte. There, William Frederick "Buffalo Bill" Cody (1846-1917) set forth to create the idea of the American West in his play Buffalo Bill's Wild West. Bill's show looked with a nostalgic eye back to the early days of the nineteenth century, which had been, ironically, characterized by the often-brutal integration of western lands into the United States. The play captivated its audience by exaggerating Buffalo Bill's qualities as a savior and using montage sequences. Buffalo Bill became America's first celebrity and toured throughout the United States and Europe. On one occassion his theater troupe departed for London with a hundred and twenty-two actors, ninety-eight Native Americans, a hundred and eighty horses, seven Texan steers, four donkeys and two deer. It was a traveling circus with an enormous commercial enterprise. Buffalo Bill's Wild West was among the first entertainment businesses to export American culture to the rest of the world and marked the beginnings of the American entertainment industry.

One could not help but be submerged in the spectacle of Bill's theater. Buffalo Bill's Wild West captured stories and characters from reality and transformed them into picturesque representations of the American West, such as General Custer's Last Battle. These stories were played by real-life characters like Sitting Bull and Kicking Bear. Through performances and costumes, they were expected to represent their Sioux traditions. The stage became the only place where traditional Native American rituals were practiced in public. One of the most famous "characters" in the play was Annie Oakley, an impressive sharpshooter, with a liberal nature who was not afraid to assert her independence. Indeed, although all performances centered on Bill's adventures, by assimilating characters in his play, his tale was one that embraced the differences within American culture.

Buffalo Bill's Wild West reveals one quality within American society that is pertinent to this day: a desire for assimilation mixed with a respect for cultural difference. In his performances every character was given a voice, but they all had to summon to Buffalo Bill's song. Today, although many Americans have lost their confidence in a cowboy who proclaimed abilities to solve disputes, others still hold on to the belief that one man can save society from what seems ideologically untrue.

Image: Harrell Fletcher, The American War (installation view), 2005-present. In June 2005, the artist visited the War Remnants Museum in Ho Chi Minh City, Vietnam, a memorial museum for what is referred to in Vietnam as ''The American War''. Fletcher re-photographed all of the images and text descriptions from the main museum and has re-presented the museum in various venues across the U.S. Courtesy the artist.