In the exhibition 'Leaving Traces', the S.M.A.K. has selected 3 key works from the oeuvre of the Dutch artist Loek Grootjans. Curbs & Cracks, is a retrospective of work by the Belgian artist Koen van den Broek. It focuses on a young artist who, within the space of a very short time has consistently and confidently developed a body of work that is known and appreciated all over the world. 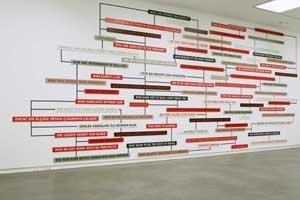 In the exhibition 'Leaving Traces', the S.M.A.K. has selected three key works from the oeuvre of the Dutch artist Loek Grootjans.
There is one thing we can say about Loek Grootjans with absolute certainty: he thinks in terms of systems and takes his artistic practice very seriously, in the sense that everything is thought out down to the very last detail. When talking about Grootjans’ work, we have to refer to the specific framework he has created for it.

This was in 1998 when he established the Foundation for the benefit of the aspiration and the understanding of context (formerly known as the institute for immediate knowledge, real perception and logic features according to the most contemporary monochrome paintings). This foundation has various departments, sub-departments and divisions that have increasingly subdivided over the years. The whole system functions like a gigantic construction around something that is actually physically absent from Grootjans’ oeuvre, and which precisely because of this defines and pervades even more forcefully everything he embarks on and creates.

In 2008, in collaboration with the museum, Grootjans launched a publication entitled Foundation, which systematically examines all the departments he had set up since 1998. Now, two years later, this collaboration has been extended in the form of the Leaving Traces exhibition. It focuses on three works of art from Foundation. These works each play a key role in Grootjans’ oeuvre. By bringing them together we are given an insight into his artistic practice which, since he started his career at the end of the 80s, has seen a great many developments.

He began his career at the end of the eighties producing purely monochrome paintings. These were inspired by an experiment he did in 1988. He shut himself up in a room without light for a month. He also wore a blindfold to make sure he could see absolutely nothing. Gradually brown patches began to appear in the completely empty darkness. When he finally left the room and removed the blindfold he was overwhelmed by a bright green colour. This colour experience was so powerful that from then on he used only browns and greens as the basis for his paintings. Aware of his position as a monochrome, abstract painter, especially with regard to his great predecessors Mondriaan, Malevich, Newman, Reinhardt, Klein and so on, he approached his work very seriously and without compromise, starting with the amount of paint to be used, which is something he has always determined very precisely before starting to paint.

Every stray drop or blob of paint was carefully recycled. This system implies a ‘delayed stop’ in the act of painting: once all the paint had been used up, the artist was forced to stop painting. In 1998 Loek Grootjans cleared out his studio and collected every remnant of paint, including every little drop that had fallen on the floor. He collected all these ‘last’ remnants of paint – the DNA of all the years of his artistic practice and system – in a Petri dish and called it The Final Remains of a contemporary monochrome Painter... which is also the first work of his to be exhibited at the S.M.A.K.

The Remembering Department. is shown in conjunction with this work. We see a storage room with shelving against a wall. The shelves are empty and covered with a thick layer of dust, except for a space here and there which has been kept dust-free. Arranged on these spaces are the objects Grootjans has used in various Foundation projects since he set it up. The dust comes from the artist’s studio and he has carefully amassed it over the years.

The third key work is The Good Care Department. During a visit to the Opera Paese in Rome in 2001, Grootjans encountered election posters near the arts centre, featuring the surgically enhanced head of the television magnate Silvio Berlusconi and with the slogan: ‘Who takes good care of himself, takes good care of those who choose him.’ Inspired by this, Grootjans created a mural in which he juxtaposed the slogan diagrammatically with extracts from his book Visioen van de overkant (2002). The writing comprises many ‘observations’ and each one shows a subset of what concerns man in his happiness, fear, horror, desires, pleasures and obscenities. It shows an endless series of profundities, foolishness, delights and shamelessness linked together. In other words, Visioen van de overkant contains every possible definition of ‘the other’. Several versions of the Opera Paese mural have been shown in various contexts and in a number of different languages. At the S.M.A.K. Grootjans puts together another version of The Good Care Department.

Leaving Traces turns the spotlight on three major installations by Loek Grootjans. Each marks a new direction the artist has taken in his work and together they give us a picture of his artistic practice. After the exhibition the museum will select one of the works for its permanent collection.

In January 2010 S.M.A.K. will be opening its doors for "Curbs & Cracks", a retrospective exhibition of work by the Belgian artist Koen van den Broek (b. 1973, Bree). It will focus on a young artist who, within the space of a very short time – 10 years – has consistently and confidently developed a body of work that is known and appreciated all over the world.

Koen van den Broek finds his inspiration in ‘being en route’ and his work is nurtured by dozens of road trips. Using his own snapshots the artist creates the basis for his paintings, and in a manner that is to the point and functional. Unlike a sketchbook, the photographic images serve only as a reminder and record interesting lines, structures and twists in the landscape he has observed. They are only formal recollections of what he has perceived and have little or no emotional value. The recordings appear to ‘reject’ being en route’.

What interest the artist are the small segments of reality which most of us seem not to really notice. A kerb, a collection of shadows on the road suggesting the presence of a truck, a barren, snow-covered forest landscape, a simple house with a special emphasis on the trivial garage door, a motorway with an interesting yet stereotype curve in the landscape, and cracks in the asphalt which nobody notices. He sees the rear- or side views of objects, houses, and urban or natural landscapes. He focuses on his subject in such a way that it becomes trivial. What could be an impressive viaduct in a landscape becomes a dark, functional construction with a fragment of its natural context on the left and on the right.

This ‘antisocial’ focus is linked to a painterly process in which van den Broek strips the images of all unnecessary detail so that the atmosphere is defined only by several basic lines. Thus leaving us with the ‘experience’ of space. The painterly execution flirts with abstraction. The choice of title negates this however, by taking the image back to reality. The unusual colours – ranging from cold white to every imaginable tone of grey combined with a carefully chosen blue, red, yellow or orange – confuses the spectator. Koen van den Broek is not at all interested in painting ‘realistic scenes’ but fervently seeks atmospheric ‘possibilities’. What he presents to the spectator are paintings, not landscapes, kerbs or buildings.

"Curbs & Cracks" shows a selection of existing work linked to a series of new paintings. The whole is developed around delineated clusters of works, choices that are substantiated purely formally and thematically as well as regarding content. Recent creations react to existing work, act within the body of work as a catalyst that nurtures and strengthens the whole, or precisely in contrast to this, acts as a virus that infects and weakens all the carefully developed patterns.