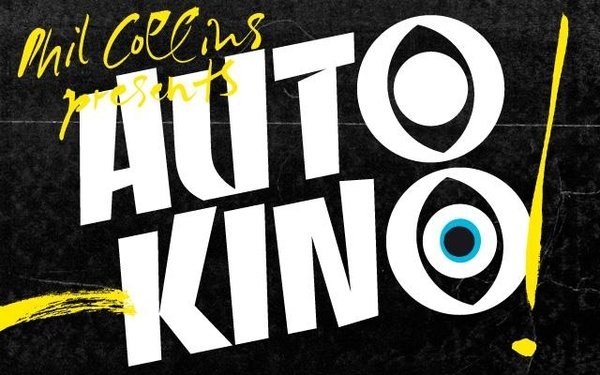 Experimental films, essay films, art videos, docu-dramas, melodramas, krimis, and everything in between – from the warm leatherette of a passenger- or driver's seat. British artist Phil Collins turns the Temporäre Kunsthalle Berlin into a stationary indoor drive-in cinema. In a cluster of secondhand cars installed in the space, individual vehicles serve as booths or box-seats, offering the audience an intimate situation in which to enjoy a rotating program of artists' videos and film classics. In a playful way, this questions the set-ups in which video art is usually encountered, and reflects on perceptions of the public and the private.

In the 1950s the then extremely successful drive-ins were considered seedy "passion pits" and a moral hazard to youth. In Germany and Europe drive-ins never achieved the same popularity as in the USA: car-ownership was too scarce, ticket prices too high, and winter-month temperatures too low.

Auto-Kino! incorporates the attractions of this now almost extinct mode of spectatorship. Phil Collins and Siniša Mitrović, who jointly run the visual arts company Shady Lane Productions (Berlin/Glasgow), have programmed more than 100 titles covering a broad range of film and video, from the 1920's onwards, which generally relate to two main concerns. On the one hand, the works revolve around the sensual circuitry and emotional impact of moving images, positioning the viewer as a desiring subject. On the other, they explore the duality of authenticity and manipulation embedded in cinematic representation. The simultaneous erection and abolition of cinema's visual pleasures lie at the heart of significant parts of both contemporary filmmaking and visual arts – a traditionally maintained distinction which Auto-Kino! proposes is as blinkered as it is obsolete. Engaging the far-reaching implications of the phenomenon of drive-ins, Auto-Kino! offers the audience a fresh perspective on the promiscuous liaisons between film and the moving image in other visual media.

The evening and weekend programs present feature films from Germany's rich history of genre cinema, with an emphasis on the turbulent years of the 1930s and 1940s. Reimagining Schlossplatz/Marx-Engles-Forum as the site of a drive-in that never existed, Auto-Kino! brings together a selection of Ufa melodramas, West German thrillers and DEFA rubble films that invite the audience to look again at the relationship between the idea of national community, and the articulation of its social and political body in the light of cinematic representation.

A publication documenting Auto-Kino! includes an essay by Bert Rebhandl, entries on all films, and an interview with Phil Collins.

During the 60th Berlin International Film Festival, from February 11 – 21, Forum Expanded will present one of its programs at Auto-Kino!

Auto-Kino! takes place in cooperation with DAAD Berlin Artists Program. During the show, a solo exhibition by Phil Collins will be on view at daadgalerie (Zimmerstraße 90/91, 10117 Berlin, http://www.berliner-kuenstlerprogramm.de).

Phil Collins is a visual artist and filmmaker based in Berlin and Glasgow. He was one of the recipients of the Paul Hamlyn Foundation Award for Visual Arts in 2001 and was nominated for the Turner Prize in 2006.