Comprised of approximately 40 works, this exhibition presents a little known body of his work in metal drawn from the holdings of the Rauschenberg Estate with loans from institutions and private collections. In response to the building's scale, larger and more elaborate Gluts have been added to the exhibition, displaying not only their majesty and monumentality, but also the dynamic between the sculptural and painterly that defined Rauschenberg. His aim was to capture the reflective, sculptural, thematic, and textural possibilities of the material. 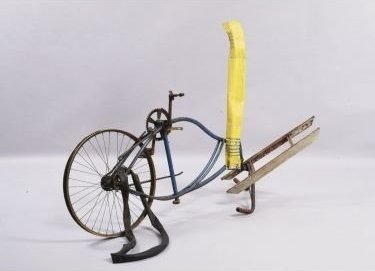 Eighteen months after Robert Rauschenberg’s death on May 12, 2008, the Guggenheim Museum Bilbao is organizing a posthumous tribute to this great American artist with the exhibition Robert Rauschenberg: Gluts. From February 13 to September 12, 2010, this show will display nearly sixty artworks that reveal a relatively unknown facet of his work in metal, made possible by generous loans from the Rauschenberg Estate and private collections and institutions in several different countries. In November 1998, the Guggenheim Museum Bilbao hosted the most comprehensive retrospective to date dedicated to this gifted artist. The show was a highlight of the international exhibition calendar given the high quantity and quality of the works displayed. Eleven years after the retrospective, the Guggenheim Museum Bilbao has now come full circle with Gluts, the last series of sculptures that the artist produced.

Referring to this first temporary exhibition on the museum’s calendar for 2010, Juan Ignacio Vidarte, Director General of the Guggenheim Museum Bilbao, has remarked: "Bringing Rauschenberg’s work back to Bilbao, especially his Gluts, after more than a decade, is not just a privilege for our visitors; it is also a chance for the Guggenheim Museums—with which Rauschenberg always enjoyed a very close relationship. We are honored to pay tribute to the artist, who passed away in 2008."

During a career that spanned over fifty years, Robert Rauschenberg (b. 1925, Texas–d. 2008, Florida) redefined the art of our time and earned a reputation as one of the most prominent artists of the 20th century. He was the defining force in contemporary art for nearly sixty years, creating art in a range of materials, media, and techniques more varied than that of any artist of the twentieth or twenty-first centuries. For him, painting entailed not only using a brush, but also silkscreening, collaging, transferring, and imprinting, and he did so on the widest array of materials from canvas, board, silk, and nylon, to sheet metal, Plexiglas, plaster, and paper.

He has been called a forerunner of virtually every postwar American art movement since Abstract Expressionism, however, he remained fiercely independent from any particular affiliation throughout his protean life.

From the early days of his career, Rauschenberg exhibited a boundless enthusiasm for using all kinds of materials in which to make his art. He was extraordinarily fond of discovering objects that others had thrown away and finding new and often improved uses for them. In doing so, he reinvigorated these items and gave them new life. Rauschenberg himself often spoke of his special fondness for waste materials: "Well, I have sympathy for abandoned objects, so I always try to rescue them as much as I can."

In 1964, at the age of 38, Rauschenberg received the Grand Prix for Painting at the 32nd Venice Biennale, which cemented his international reputation. It also brought into sharp focus the rivalry between New York and Paris as they vied for leadership in the visual arts field. In winning this prize, Rauschenberg marked a departure from the unbroken line of pre-war European masters who had consistently won the Grand Prix since the end of World War II. Alan Solomon, curator of the U.S. Pavilion, took 22 works by Rauschenberg to Venice, including some of his iconic silkscreened paintings and his Combines.

In the 1980s, Rauschenberg’s artistic attention shifted toward the exploration of the visual properties of metal, and the Gluts was his first body of work in this new material. Susan Davidson, Senior Curator for Collections and Exhibitions at the Guggenheim Museum New York, points out in the exhibition catalogue: "Whether assembling found metal objects or experimenting with his own photographic images screen-printed onto aluminum, stainless steel, bronze, brass or copper, Rauschenberg sought to capture the reflective, textural, sculptural and thematic possibilities of the material." The Gluts were inspired by a visit to his home state of Texas on the occasion of the exhibition Robert Rauschenberg, Work from Four Series: A Sesquicentennial Exhibition at the Contemporary Arts Museum Houston, which was organized to celebrate the sesquicentennial (150th anniversary) of Texas’s independence from Mexico. In the mid-1980s, the Texas economy, which depended heavily on the oil industry, was in the throes of an economic recession due to a glut (or surplus of supply) in the oil market. Rauschenberg was surprised that this "glut" was responsible for the economic devastation of this Gulf Coast region, turning the rural landscape into a wasteland of dereliction strewn with failed gas stations, abandoned cars, and rusting oil barrels.

Upon returning to his home in Florida, Rauschenberg headed to the local junkyard outside Fort Myers and began to collect detritus like that he had seen scattered across the desolate Texas countryside, the image of which had been seared into his brain: road signs, exhaust pipes, radiator grills, metal blinds, etc. At his Captiva studio, he transformed this apparently useless junk into wall reliefs and free-standing sculptures that he titled Gluts. The series recalls his famous Combines of the 1950s in which he brought three dimensional found objects into the realm of painting.

When the Leo Castelli Gallery in New York organized the first public showing of this series in 1986, Rauschenberg commented on their meaning: "It’s a time of glut. Greed is rampant. I’m just exposing it, trying to wake people up. I simply want to present people with their ruins [...] I think of the Gluts as souvenirs without nostalgia. What they are really meant to do is give people an experience of looking at everything in terms of what its many possibilities might be." Rauschenberg chose these objects not only for their everydayness but also for their formal properties. Individually and collectively, materials such as these are the very foundation of his artistic vocabulary. Over the next four years, the Gluts were exhibited at numerous galleries in the United States and around the world, and critics regularly commented: "The old Rauschenberg is back".

The show is curated by Susan Davidson and David White, Curator of the Estate of Robert Rauschenberg. In Bilbao, the exhibition, previously shown at the Peggy Guggenheim Collection, Venice and the Museum Tinguely, Basel will feature approximately twenty additional works that have been added specially for the Bilbao presentation. Responding to the grand spaces of the museum, these additions are significantly larger in scale than the works that have previously made up the exhibition. Rauschenberg traveled to Bilbao on many occasions—he was present at the Museum’s inauguration in 1997— and returned not only for his own retrospective but also for that of his close and longtime friend, Pop artist James Rosenquist. Each trip gave him the opportunity to photograph the city and directly experience the transformative presence Frank Gehry’s architectural masterpiece has had in the Basque city.

The exhibition is complimented by the Didaktika section that features Robert Rauschenberg’s social commitment and his collaborations with other artists. The exhibition is accompanied by a Spanish language catalogue that includes an essay by Susan Davidson, who analyzes the genesis of the Gluts series in the context of the artist’s career; a text by writer and painter Mimi Thompson, who explores the importance of performance in Rauschenberg’s work, not just as an expressive medium but also as a way of articulating his interests, his infinite curiosity, or his aesthetic and artistic preoccupations; and an excerpt from the tribute dedicated to him by choreographer Trisha Brown, commemorating the time when the set decorations for her dance production were lost in Italy and Rauschenberg made a new set, whose elements later evolved into some of the Neapolitan Gluts featured in this exhibition.

Guggenheim Museum Bilbao
Galleries 301, 302, 303, and 304 on the third floor
Avenida Abandoibarra, 2 Bilbao 48001, Spain
Hours
Tuesday to Sunday: from 10 am to 08 pm
Monday closed.
There are different admission fees for different types of visitors: adults, students, senior citizens, and groups of more than 20 people. There is no admission fee for children under 12 accompanied by an adult.