The exhibition provides a comprehensive overview of Ruscha's paintings from the last five decades. The focus the selection of works share is the constants in Ruscha's artistic endeavors: the attention he pays to words and word-paintings. Also apparent is his analytical approach to painting, which, time and again, results in a revision of his formal methods. And finally the exhibition demonstrates how his experience with drawing, photograph and film find their way into his painting. 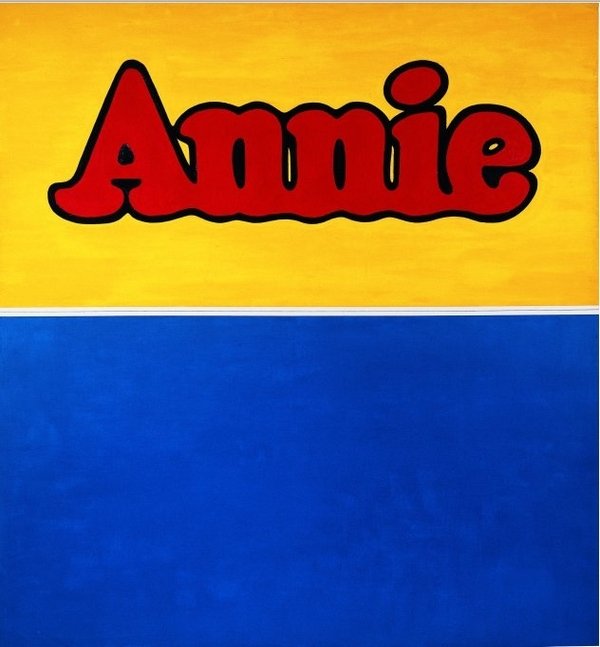 The exhibition provides a comprehensive overview of Ruscha's paintings from the last five decades. The focus the selection of works share is the constants in Ruscha's artistic endeavors: the attention he pays to words and word-paintings. Also apparent is his analytical approach to painting, which, time and again, results in a revision of his formal methods. And finally, by omitting additional artistic forms of expressions that Ed Ruscha also employs, the exhibition demonstrates how his experience with drawing, photograph and film find their way into his painting.

In one of his earliest paintings, "E. Ruscha," executed in 1959 during his studies, Ed Ruscha (pronounced: Rew-shay, as the artist clarified in an invitation to a solo exhibition in 1973 in London) had already arranged the letters of his name as characters that filled the painting and were placed in the foreground of a landscape. In the paintings that followed landscapes were only alluded to behind a dominating word by means of a line in the horizon or different color fields. In a further step, Ruscha used trademarks that had the character and function of logos, rather than individual words. As steep diagonals they rush by like billboards along the highway, seen from the viewpoint of driver or, like the "Hollywood" sign, stand in the horizon, having become part of the landscape. With these methods Ruscha transmits the zoom technique and the simulation of speed, as they are used in film and comics, into paintings.

Ed Ruscha (b. 1937 in Nebraska) takes his motifs from the culture that surrounds him, which, in Los Angeles, his home by choice, is strongly influenced by the film and advertising industries. With the word "Annie" he quoted the trademark of the "Little Orphan Annie" comic strip, created in 1924 for the New York Daily News; the mountain in his Mountain Series is a play on the Paramount Pictures logo; "Large Trademark with Eight Spotlights" depicts the 20th Century Fox logo, while the dimensions of this work are reminiscent of a movie screen; in his painting "The End" these two words, which comprised the final shot in all black and white films, are surrounded by scratches and streaks reminiscent of damaged celluloid.

The fascination that such lettering and words have for Ed Ruscha led him to develop his own typeface in 1980, "Boy Scout Utility Modern": like the lettering in the "Hollywood" sign on the hills before Los Angeles, the curve of the characters is angular as if they were created by a carpenter. His systematic exploration of the effects of different fonts led Ruscha to use unusual dyes, such as fruit juice, blood, chewing tobacco, chocolate, coffee and tea. In his 1972 work "Sphere of Pepto-Bismol" the artist used Pepto-Bismol, a pink stomach medicine, as paint; in "It's Only Vanishing Cream" from 1973 he painted shellac on satin; in "Sand in the Vaseline" from 1974 he applied egg yolk onto moiré. The particular color effect of such substances is what interested the artist in these experiments, as well as what happened to them as they dried and aged. In this "romance with liquids," as Ed Ruscha himself named the phase, his interest in transience and decay found expression early on.

The motifs he picks up in streets and everyday life are not bound to these origins. Rather Ed Ruscha frees words from their original confines and detaches them from their specific syntactic or semantic context. The three letters OOF - of a comic strip figure being punched in the stomach, for instance - are magnified by Ruscha onto the canvas; they become a kind of still life or object that the viewer can confront with a new way of interpretation. On the one hand the onomatopoetic exclamation speaks even more urgently to the viewer while, on the other, it is relieved of its original function and upgraded to a pictorial object. Many of the words Ruscha has transformed into motifs appear to be abandoned in a strange place or landscape where they wait to be recognized.

With his silhouette paintings from the 1980s Ed Ruscha expanded his artistic repertoire once again. The dark, blurred silhouette of a howling coyote or a row of covered wagons, like those used by the early settlers, activates stereotyped pictures of Americans and their self-image. Instead of words white bars appear, as replacements or as allusions to censorship.

The exhibition will also present a selection of works from the "Course of Empire" cycle, with which Ed Ruscha represented the USA at the Venice Biennale in 2005. In this work series Ruscha subjected his 1992 "Blue Collar" cycle to a revision by contrasting the original five black and white paintings with new colored paintings of the same composition. Both the contemporary variations as well as the original motifs depict anonymous, box-like functional structures in arbitrary locations. Their identity is only discernable from the logos of the respective companies on the façades. By means of the changing company names, the paintings tell the tale of "urban frustrations" and the "cruelty of progress" (Ed Ruscha): the replacement of a once strong industry and manufacturing society by the products of service providers in the digital age.