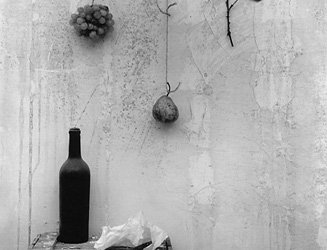 The exhibition looks at the figure and trajectory of Alberto Schommer (Vitoria-Gasteiz, 1928), one of the most outstanding photographers on the Spanish artistic scene in the past few decades. Among the approximately one hundred works selected for the exhibition are vintage originals and modern copies from his first period, photographs belonging to the artist’s "Paisajes Negros" ("Black Landscapes") series and a selection of works taken from books Schommer has published between 1978 and 2009. The last section of the exhibition contains photomontages and volumetric exhibits.

Alberto Schommer was born in Vitoria in 1928. His early interests included painting, film and photography, which he first became acquainted with in the studio his father, German photographer Alberto Schommer Koch, had run since 1922 in the city. Since his initial links to movements working to revitalize Spanish photography in the 1950s, Schommer has enjoyed a long and prolific career replete with formal challenges and permanently informed, under the early influence of the work of Irving Penn and William Klein, by the desire to defend the artistic status of photography. His reports, still life photographs, landscapes, portraits and what he calls cascografías (loosely translated here as "cracklegraphs") are now part of Spanish visual memory and the history of photography.

This exhibition provides an overview of the significance of Alberto Schommer’s work and his long career. One of the leading photographers the creative scene in Spain in recent decades, Schommer has always been acutely sensitive to the artistic trends of his time. After a brief foray into painting, which he abandoned definitively in the early 1960s, Schommer took on board all sorts of influences, from the post-Cubist landscapes of Benjamín Palencia and Surrealism to the realist still life paintings of Antonio López, art informel and the experimental avant-garde of the 1960s.

But it is probably his portraits that have made Schommer one of the best-known Spanish photographers of his day. For nearly forty years he has published many portraits—including the ones in his famous Psychological portraits series—in the media, portraying through them the face of power, the economy and culture, and, essentially, creating an extensive frieze of the country’s recent history. His unusual, idiosyncratic approach to the portrait was to have a major impact in the 1970s and 80s, and his photographs became a kind of visual chronicle of the Transition, the popular term for the years after Franco’s death.

The hundred or so works selected for this major retrospective include both vintage and modern prints from the early phases of his career, photographs from series like Black landscapes, Masks and Cascografías (Cracklegraphs), images all providing an insight into the books Schommer has published since 1978 to the present day. The final section includes many of his photomontages and "volumetric" works. The cascografía, or cracklegraph, is a technique he invented to enable him to make good use of the formal results of deforming photographic paper. Over time, the procedure would evolve into a kind of sculpture, thus bringing the third dimension to photography. The current exhibition is divided into three parts: Early Years, Landscapes and Scenarios and Experimentation and Stagings.

Schommer’s oeuvre has been shown in many countries and his photographs published by the leading international magazines and journals. During his professional career, he has received countless awards and published more than seventy books containing photo-reports produced on his travels around the world. In 1996 he was inducted into the San Fernando Academy of Fine Arts in Madrid and in 2009 Spain’s Minister of Culture awarded him the Gold Medal for Merit in the Fine Arts.

This selection of some fifty works is a first step towards recovering the oeuvre of local photographer Tomás Acillona. (Guecho, Vizcaya, 1893–Biarritz, France, 1957). A trained lawyer, Acillona began to experiment with a range of photographic techniques in the mid-1920s, in tandem with musician Andrés Isasi (Bilbao, 1891–Algorta, Vizcaya, 1940). One of Acillona’s specialities was the complex gum bichromate technique developed in the second half of the 19th century and at the peak of its popularity in Spain in the early years of the 20th century. Indeed, Acillona was so taken by the technique that he actually wrote a complete treatise on it.

The exhibition reviews the genres Acillona worked in, which included landscapes, the still life, portraits and popular scenes, and shows him to have been a leading figure of photographic Impressionism.