Living and working in Vienna 3

Remapping Vienna's terrain of art, Stars in a Plastic Bag assembles outstanding artists with their works, ideas, and performances. It has been possible again to win a renowned team of international female experts, who have come up with a selection eagerly awaited by the art scene. One part of the show will focus on positions of artists like Tillman Kaiser, Lukas Pusch, and Lisa Ruyter. 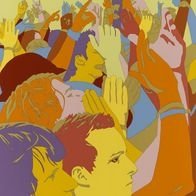 With its third installment of the exhibition series Living and working in Vienna, the Kunsthalle Wien offers a current survey of Vienna’s manifold and original art scene. It has again been possible to win a team of renowned international female experts who have remapped Vienna’s terrain of art. The curators responsible for the selection eagerly awaited by the art world are Xenia Kalpaktsoglou, Co Director of the Athens Biennial, Raphaela Platow, Director of the Contemporary Arts Center Cincinnati, and Olga Sviblova, Director of the Moscow Multimedia Art Museum. With the show’s subtitle, Stars in a Plastic Bag, the curators – with a certain twinkle in their eyes – allude to the rich and fascinating booty of their forays through Vienna’s studios and galleries. Living and working in Vienna III assembles outstanding artists’ works, ideas, and performances, which will merge into a cultural amalgam in the open space of the Kunsthalle.

The Kunsthalle Wien’s presentation, scheduled to take place every five years, offers Vienna’s active, vibrant art scene an additional platform in the city, featuring as a launching vehicle for young art, which it catapults into an international orbit. The exhibition series Living and working in Vienna has already seen the international relevance of Austrian art confirmed quite early on through the careers of Elke Krystufek, Gelitin, or Markus Schinwald.

Art and life in Vienna are inextricably linked with difficult to fathom representations, communicative platforms, cognitive eruptions, perceptual ruptures, and forms of mind expansion. Living and working are essential parameters defining existential spaces and formatting the biographies of individual artists. Those who have found a center of their life and work in Vienna present themselves as global players commuting between Vienna and metropolises like New York or Berlin and as multi tasking experts who feel at home in a wide variety of media on the one hand and as local scouts drawing on the city’s cultural resources for their ideas and inspirations on the other.

One part of the show will focus on thirteen positions of artists like Tillman Kaiser, Lukas Pusch, or Lisa Ruyter whose heart belongs to painting and who bring the classical medium up to date in many facetted ways. Another emphasis will be on gestural and expressive forms of articulation whose post Actionist attitude becomes particularly manifest in videos such as those by Mara Mattuschka, Rudolf Polanszky and Hubert Sielecki. The participating artists, mainly born in the 1970s, use the exhibition hall as an extended studio by realizing their works on site like Luisa Kasalicky and Katrin Plavcak. The Kunsthalle Wien will turn into a hot spot of production, with large format works instead of lavish exhibition architecture accentuating the venue.

Thomas Draschan uses the full height of the space for his wall collage Operation ... with the new video Continental Divide. Stephen Mathewson fathoms the possibilities of presentations in museum spaces with his wall comic and takes about 20 meters to tell the story of Cat Fischermann’s faked death, while Martin Vesely’s Stars, as the artist calls his mobile like objects, provide the icing on the cake of the exhibition, as it were. The travel experiences Mahony have made throughout two years in the context of their Odyssey 500 draw on everyday subjects and elements of popular culture such as Werner Herzog’s film Fitzcarraldo and vacillate between “high” and “low” art. Maria Bussmann’s poetically philosophic drawings on Spinoza’s theory of emotions, Kathi Hofer’s installation like reflections, and Lone Haugaard Madsen’s reduced spatial interventions from recycled materials provide subtle, conceptual, and sometimes anything but easy to grasp approaches to art.

It is remarkable that Vienna’s contemporary art does no longer want to restrict itself to the work as such in many fields either and thus extends its room to move in performances, readings, and cross genre collaborative projects. A location bound medium, the exhibition opens out into the city’s sphere of living with star like rays, so to speak, forming a network with the participating artists’ realms of work and reflection, such as Bernhard Cella’s art book saloon, which, as a project, oscillates between end in itself and economic enterprise, analyzes forms of behavior, and generates alternative approaches of commercial usability. This also holds true for Guerillawalk by the entertainer Oliver Hangl who offers a tour through the exhibition and adjacent public and private spaces with radio headphones. Hangl’s project space k48 sets the tone for Vienna’s art scene as do Thomas Draschan, who presents exhibitions in his flat in the city’s fifth district, and Martin Vesely with his off space Ve.sch; with events, discussions, exhibitions, and meetings, artists actively organize what living and working in Vienna are about.