An exhibition that explores a Pittsburgh neighborhood's built environment along with some of the recent plans and projects created to improve it. Designing Oakland documents the landmarks, urban planning ideas, and historical forces that have shaped this important civic and cultural center from the 19th century to the present. 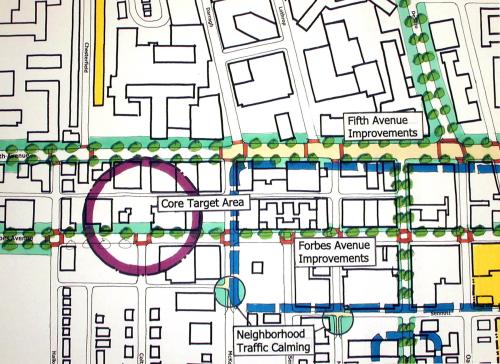 Programs
Complementary public programs for Designing Oakland will be announced in an upcoming news release. For more information, please call the Carnegie Museum of Art Communications Office at 412.622.3316.

Tours
Groups can schedule guided tours of the exhibition by calling 412.622.3289.

Support
Support for this exhibition has been provided by the Juliet Lea Hillman Simonds Foundation, Inc. and the Alexander C. & Tillie S. Speyer Foundation.

The programs of the Heinz Architectural Center are made possible through the generosity of the Drue Heinz Trust.