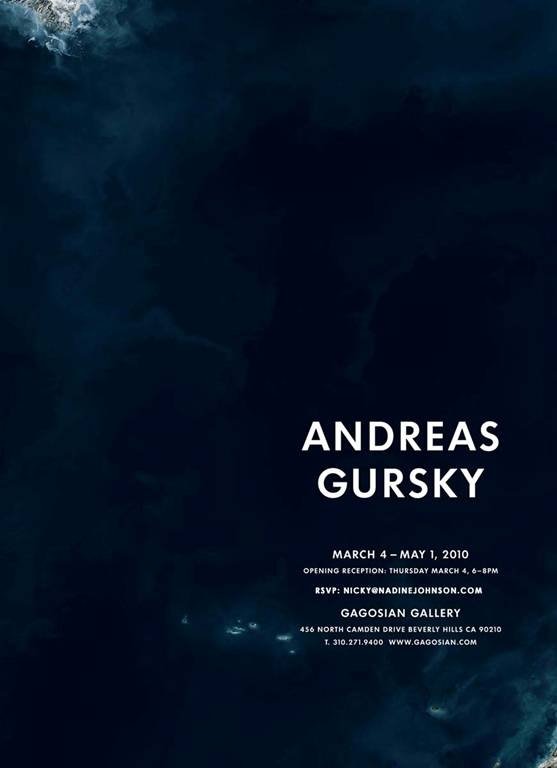 Space is very important for me but in a more abstract way. Maybe to try to understand not just that we are living in a certain building or in a certain location, but to become aware that we are living on a planet that is going at enormous speed through the universe. I read a picture not for what’s really going on there, I read it more for what is going on in our world generally. (Andreas Gursky)

Gagosian Gallery is pleased to announce an exhibition by Andreas Gursky to inaugurate the newly expanded Beverly Hills gallery, designed by Richard Meier & Partners. In the two adjacent main galleries, Gursky will present a new series of large-scale works as well as a grouping of subjects that he has selected from the last twenty years, from the landscape Műlheim an der Ruhr, Anglers (1989) to the empty scene of Untitled XV (2008).

Gursky has demonstrated that a photographer can make or construct—rather than simply take— photographs about modern life and produce them on the scale of epic painting. Just as history painters of previous centuries found their subjects in the realities of everyday life, he seeks inspiration in his observations of the human species in the world, whether firsthand or via reports of global phenomena in the daily media.

The resulting pictures have a formal congruence deriving from a bold and edgy dialogue between photography and painting, empirical observation and artfulness, conceptual rigor and spontaneity, representation and abstraction. In pursuit of his aim to create “an encyclopedia of life” Gursky’s world view fuses the flux of reality with the stillness of metaphysical reflection.

From initially using the computer as a retouching tool, he began exploring its transformative potential, sometimes combining elements of multiple shots of the same subject into an intricate yet seamless whole, at other times barely altering the image at all. Over time his subjects have expanded to map and distill the emergent patterns and symmetries of a globalized world with its consensual flows and grids of data and people, architecture, and mass spectacle.

In the new Ocean series, Gursky has for the first time relinquished his position behind the camera to work with satellite images of the world as his raw material, creating contemporary mappe del mondo on a scale befitting the cosmic grandeur of the subject. In their darkly nuanced surfaces, he has worked to reconcile the division between the machine eye and the human eye, continuing the debates and practices begun in the nineteenth century regarding photography and the issue of artistic expression versus objective science.

Andreas Gursky: Long Shot Close Up (2009), a documentary directed by Jan Schmidt-Garre (German with English subtitles), will be screened continuously in the rear gallery for the duration of the exhibition.

Opening reception for the artist: Thursday, March 4th, from 6 to 8 pm