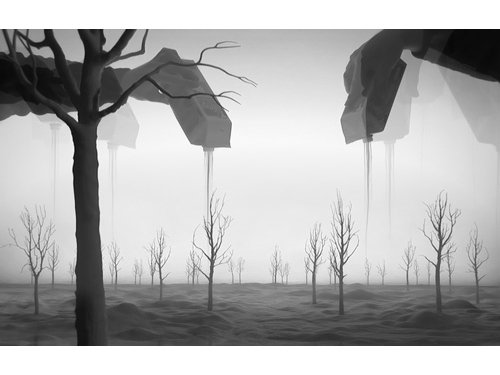 Xavier Hufkens is delighted to present Works on Paper & Video by Hans Op de Beeck. After Family (2006) and My Brother’s Gardens (2003) the artist is now exhibiting new large-scale watercolours and the video Staging Silence.
Less than a year ago Hans Op de Beeck presented for the first time a solo exhibition that consisted entirely of large black-and-white watercolour paintings. In this work the artist returned to his visual-art roots, painting in particular. Since then Op de Beeck, in addition to his sculptural work and film productions, has been working on an ongoing series of large-scale watercolour paintings in which fictitious, desolate interiors and landscapes are evoked. These images refer to cinematography, with links to film noir, as well as old painting, specifically Renaissance painting, in which the frontal quality of the composition plays a central role. In the exhibition at Xavier Hufkens the artist is showing a number of new watercolour paintings from this intimate series.

The recent black-and-white video Staging Silence evolved around remembered places. Not existing places but instead abstracted archetypical backdrops; the kind that stick in the mind’s eye as the greatest common denominator of scores of comparable public locations. A great variety of venues are materialised before the eye of the viewer. Hands appear and disappear in the image like anonymous puppet masters. Banal objects and handmade representations are manipulated at scale and in artificial light until they have created alienating but recognisable places.

The different scenes in Staging Silence can be called either ridiculous or serious, as can the eclectic collection of images we all carry around with us in our memories. But you could say the prevailing mood is earnestness and a sense of brewing threats. The title refers to the staging of such slumbering decors, in which no human is present but the viewer can project oneself as the only protagonist.

Recent solo exhibitions of Hans Op de Beeck (1969) are In Silent Conversation with Correggio (2009) in Galleria Borghese in Rome, Italy and Extensions (2007) in the Centraal Museum in Utrecht, the Netherlands. The artist has also participated in the Singapore Biennale (2008) and the Shanghai Biennale (2006). He has realised large-scale sculptural installations such as Location (5) (2004), currently a permanent installation at the Towada Art Museum, Japan, Merry-go-round (2007) and Location (6) (2008). The videos of Hans Op de Beeck have been shown throughout the world. Later this year Hans Op de Beeck will participate in the Aichi Triennale, Japan and open the solo exhibition Sea of Tranquillity in Le Grand Café in Saint-Nazaire, France, which will travel on to Belgium, Switzerland and Spain.

It is with great pleasure that Xavier Hufkens announces the new exhibition of Malcolm Morley. It comprises seven new oil paintings made by the artist in 2008 and 2009.
On view in these paintings are Morley’s signature subjects, ships and old airplanes. The artist bases his work on models and found or remembered images that he paints to dramatic effect in unnatural colours. His objective is to achieve a rhythm, abstraction, the expressive power of the canvases or to be more precise, the way in which he transfers his keenly observed images to the canvas via the act of painting. Upon close inspection, each square centimetre of Morley’s paintings is nothing less than a small masterwork. Through a combination of sensuousness and intellect the artist develops a metalanguage, as it were, of painting.

Motocross for Morley is a modern form of mythology, replete with heroes who brave danger and death, and also have their flaws and Achilles heels. His motocross paintings fit the realistic painting style based on photojournalism that he developed in the 1960s to great critical acclaim. Morley’s technique is based on rendering details. Each digital image is subdivided into a grid of small squares that are transferred to the canvas one by one. Using this technique the artist achieves an extraordinary pictorial intensity. Dynamic images fragment into mosaics of small abstract paintings, in which there is no longer a distinction between background and foreground. In the words of the artist himself: ‘It’s much more difficult to make an abstract painting that is real than an abstract painting that is abstract.’

The paintings in the exhibition embody a tension between reality and abstraction. Blue Boyz (2008) and Ring of Fire (2009) engage the expressive nature of painting through a sculptural bulge. Thor (2008) slips into an abstract, flat representation of the elements of the picture. The paintings emphasise the artistic objectives in Morley’s oeuvre and demonstrate his technical and substantial mastery over the things and events that he records in paint.

Malcolm Morley was born in London in 1931. He studied at the Camberwell School of Arts and Crafts and the Royal College of Art. Since his first show in New York in 1957, he has had countless exhibitions in Europe and North America and took part in international exhibitions, including Documenta 5 and 6. His first retrospective in Whitechapel Art Gallery earned Morley the honour of being the first to receive the Turner Prize for British artists. Further exhibitions include an overview of his watercolours in the Tate Gallery, Liverpool (1991), a solo exhibition at the Musée National d’Art Moderne, Centre Georges Pompidou, Paris (1993), a travelling exhibition in the Fundación La Caixa in Madrid and in the Astrup Fearnley Museet for Moderne Kunst in Oslo (1995-96), and a retrospective exhibition at the Hayward Gallery in London (2001). In 2006, Morley’s work was shown in the retrospective The Art of Painting, curated by Bonnie Clearwater in the Museum of Contemporary Art in North Miami. Morley’s work is included in museum collections across the world.