Film Series. The 10 narrative films and documentaries in this series, each engaging digital processes, range from traditional forms to radically new approaches to filmmaking. 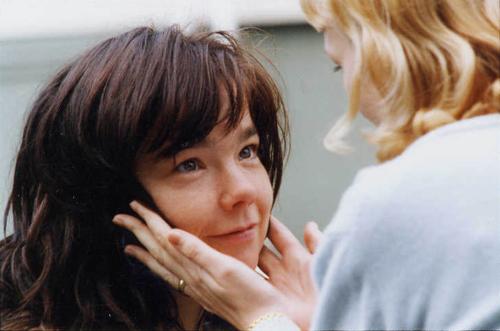 During the past 20 years, video has played an increasing part in many aspects of feature film production, and recent advances in digital technology have exponentially accelerated this process. For some filmmakers, digital technology has provided conveniences of time, money, and maneuverability in achieving images and sound that evolve from traditional celluloid films. For other filmmakers, these new means for recording and manipulating image and sound have inspired a rethinking of what a film might look like and sound like, and how it might invite new ways of storytelling and new vivisections of the human psyche. Since the early 1980s, there has been an increasing stream of violent, star-studded actions films using computer-generated imagery, but these are not the only responses to digital technology. The 10 narrative films and documentaries in this series, each engaging digital processes, range from traditional forms to radically new approaches to filmmaking.

Dancer in the Dark
Friday, May 24, 7:30 p.m.
Saturday, May 25, 7:30 p.m.
Set in 1964 Washington State, Dancer in the Dark is the story of Selma (pop-star BjÃ¶rk in a heartbreaking performance), a Czech immigrant and a single mother working in a rural factory. Her salvation is her passion for extravagant song-and-dance numbers found in classic Hollywood musicals (realized in several fantastic choreographed sequences). Selma also harbors a sad secret: she is losing her eyesight, and her son stands to suffer the same fate if she can't put away enough money to secure him an operation. When a desperate neighbor falsely accuses Selma of stealing his savings, the drama of her life escalates to a tragic finale. The film's use of digital imagery is consistent with von Trier's association with the Dogma filmmaking movement and its insistence on directness and spontaneity. With Catherine Deneuve.
(Denmark/USA, 2000) 140 min.
Directed by Lars von Trier
http://www.tvropa.com/channels/dancerd

Timecode
Friday, May 31, 7:30 p.m.
Saturday, June 1, 7:30 p.m.
With four images simultaneously visible on the screen, Timecode shows the unfolding of four different overlapping and intertwining storylines, all of which satirize the sordid business of Hollywood moviemaking. This highly unconventional digital film was shot in real time with no edits after the opening credits. "Your eyes do the editing, not the film," says director Figgis. The excellent ensemble cast's precisely timed, improvised performances allow the fascinating story to emerge from the wonderful commotion. With Salma Hayek and Holly Hunter.
(USA, 2000) 93 min.
Directed by Mike Figgis
http://www.spe.sony.com/movies/timecode

Promises
Friday, June 14, 7:30 p.m.
Saturday, June 15, 7:30 p.m.
Rather than focusing on political events, Promises features seven children, between the ages of 9 and 13, in a compelling human portrait of the Israeli and Palestinian conflict. The film draws viewers into the hearts and minds of Jerusalem's children, giving voice to those captured by the region's hatreds as well as those able to transcend them. The children speak directly and without self-censorship, offering dramatic, emotional, and sometimes hilarious insights into what it's like to grow up in the charged and complex city of Jerusalem. The intimacy made possible by video technology is essential to this powerful film. Promises was nominated for a 2001 Academy Award for best documentary feature.
(USA, 2001) 106 min.
Directed by B.Z. Goldberg & Justine Shapiro
In English, Arabic, and Hebrew with subtitles
http://www.promisesproject.org

Waking Life
Friday, June 21, 7:30 p.m.
Saturday, June 22, 7:30 p.m.
Director Linklater (Slacker) shot Waking Life on consumer video cameras with live actors and then applied an unusual and stunning new digital animation technique to create the bizarre fantasy world of a young man seeking to discern the absolute difference between reality and dreams. His inner journey brings him into contact with a host of inhabitants from his subconscious, each with a different theory to explain life's profound mysteries.
(USA, 2001) 97 min.
Directed by Richard Linklater
http://www.wakinglifemovie.com/#

Buena Vista Social Club
Friday, July 5, 7:30 p.m.
Saturday, July 6, 7:30 p.m.
Director Wenders employed high-definition video to make this wonderful and poetic documentary inspired by the popular, award-winning record album of the same title. Through candid interviews with many great legends of Cuban music and beautifully recorded performances, the film stands as a testament to music's ability to transcend life's difficulties. Wenders interweaves the musicians' biographies with glimpses of modern Cuba, capturing a lost culture that is suddenly, unexpectedly revived for audiences in Havana and around the world.
(Germany, USA, France, & Cuba, 1998)105 min.
Directed by Wim Wenders
In Spanish with English subtitles
http://www.bvsocialclub.com

The Adventures of God
Friday, July 12, 7:30 p.m.
Saturday, July 13, 7:30 p.m.
Program subject to change
Subiela's "metaphysical thriller" continues his exploration of the supernatural, blurring the boundaries between reality and nightmare. A man and a woman are trapped in what seems to be a dream unfolding in the labyrinthine corridors and mysterious rooms of a spacious 1930s hotel by the sea. The man remembers nothing of his past or how he came to the hotel, but two men accuse him of a crime committed elsewhere. As he and the woman search for answers, they fall in love and together are pushed to extraordinary measures to find the true nature of their existence. Using digital technology in this film rich with big ideas, bold, surreal images and Dadaist spirit, Subiela has created another surprising and fantastical meditation.
(Argentina, 2000) 90 min.
Directed by Eliseo Subiela
In Spanish with English subtitles

The Celebration
Friday, July 19, 7:30 p.m.
Saturday, July 20, 7:30 p.m.
This was the first film to receive Dogma 95 "certification" after director Vinterberg took the infamous "Vow of Chastity," pledging to dispense with as much cinematic artifice as possible. The Celebration's electrifying story takes place at a Danish country manor house during an annual family gathering to honor patriarch Helge on his birthday. While making a toast to his father, the eldest son reveals a dark secret that will forever change his family. A magnificent script, powerful acting and documentary-style digital cinematography combine to create a thoroughly unsettling sensation of realism. Winner of the Jury Prize at the 1998 Cannes Film Festival. (Denmark, 1998) 105 min.
Directed by Thomas Vinterberg
In Danish and English with subtitles

The Lady and the Duke
Friday, July 26, 7:30 p.m.
Saturday, July 27, 7:30 p.m.
Program subject to change
At 81, Eric Rohmer enters the digital age with The Lady and the Duke, a delightful companion piece to his earlier Marquise of O., with its ironic play on character shaped by environment. Shooting before a blue screen, Rohmer sets the violent socio-political upheaval of the French Revolution in a heavily stylized milieu composed of 18th-century paintings and hand-painted sets. This is the world as seen by Scottish expatriate Grace Dalrymple Elliott (Lucy Russell)-courtesan to princes, staunch friend of the monarchy, brave anachronism. Rohmer teases us into seeing revolution as a form of extreme rudeness or breach of taste. Adroitly mixing melancholy with absurdity, The Lady and the Duke celebrates the imagination's power to make and unmake worlds.
(France, 2002) 125 min.
Directed by Eric Rohmer
In French with English subtitles

Admission
Admission to CMA Cinema is $6; $5 for students, senior citizens, and Carnegie members; and $2 for CinÃ©Club members.

Support
General support for the exhibitions and programs at Carnegie Museum of Art is provided by grants from The Heinz Endowments and the Pennsylvania Council on the Arts.

Department of Film and Video programs are supported in part by the Pennsylvania Council on the Arts, the Juliet Lea Hillman Simonds Foundation, and Dr. Lila Penchansky.