Curiosity is the artist's monumental artwork to be unveiled on the 4th December at the Miami Marine Stadium for Art Basel in Miami Beach, prior accreditation. 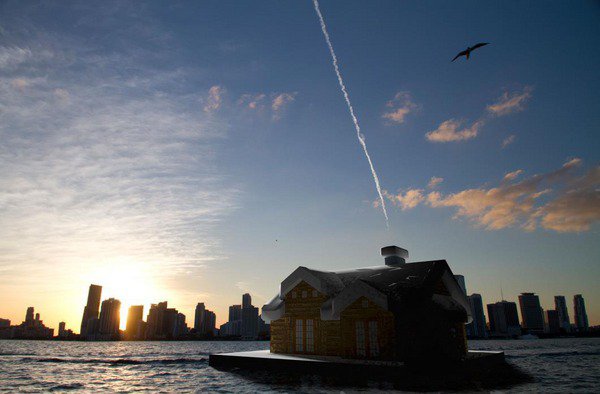 As global Associate Partner of Art Basel, Swiss luxury watch manufacturer Audemars Piguet today announced their new artist collaboration with an ambitious installation piece for Art Basel in Miami Beach. Prestigious contemporary art gallery Galerie Perrotin will partner with Audemars Piguet to present a new work by French artist duo Kolkoz. The project will take the form of a chalet floating in front of the iconic modernist structure of the disused Miami Marine Stadium. The new installation will become home to the haute horology brand’s events throughout the week, which will run alongside the Audemars Piguet booth in the Collectors’ Lounge, which features a retrospective of the iconic Royal Oak watch model. Audemars Piguet initiated its partnership with Art Basel at Art Basel’s show in Hong Kong in May 2013 and will have its first presence at Art Basel in Miami Beach from 5 to 8 December, 2013.
Benjamin Moreau and Samuel Boutruche, who make up Kolkoz, have long explored the interchange between the real and the virtual realms. Following on from their 2012 installation “Luna Park”, which saw a recreation of the lunar landing site of Apollo 11 appearing as a live football pitch on Miami Beach, the duo will this year introduce another incongruous installation to the Miami landscape. The snowy scene will float as if aboard an iceberg in the tropical Miami sea, playfully alluding to Audemars Piguet’s wintery home in the Vallée du Joux appearing in the heat of the December Florida sun. The stillness of the pristine Swiss valley is also referenced as the chalet will mysteriously and quietly pop up in front of a once dynamic powerboat racing venue.
Completed in 1963, the 6,566 seat Miami Marine Stadium was the first purpose-built powerboat racing stadium in the United States when Miami was at the epicenter of the sport. The stadium also played host to iconic cultural performances on a floating stage. After the devastation of Hurricane Andrew in 1992, the Miami Marine Stadium closed to the public and the location has since become a haven for street artists. There are now major plans to renovate the structure and original architect Hilario Candela is greatly involved in the initiative to historically restore the stadium back to its former glory. Audemars Piguet will also have a presence in the Collectors’ Lounge at Art Basel in Miami Beach, welcoming guests to a dedicated space featuring a selection of exceptional historic and contemporary timepieces. The presentation will include highlights from the 2012 touring exhibition, “From Avant- garde to Icon,” which celebrated the 40th anniversary of Audemars Piguet’s stainless steel Royal Oak model, a timepiece that revolutionized fine watchmaking. Visitors will view a historic display featuring classic pieces from the brand’s 138-year history and a watchmaker’s bench, while guided tours by watch specialists will complement the experience.
The Audemars Piguet lounge in Miami Beach will also showcase works by acclaimed British photographer Dan Holdsworth. Recognized for his striking depictions of natural landscape, Holdsworth has captured the timeless spirit of the Vallée de Joux, Audemars Piguet’s home in one of Europe’s remote and pristine forest regions. The presentation in Miami Beach is the third display of Holdsworth’s images, which have previously travelled to the Art Basel shows in Hong Kong and Basel. Still in the hands of its founding families, Audemars Piguet is committed to artistry and a spirit of independence. Commenting on the new artwork, Jasmine Audemars, Chairwoman of the Board of Directors said, “Audemars Piguet continues to pursue its commitment to innovation with a long-term partnership as global Associate Partner of Art Basel and we are delighted to be announcing our new artistic partnership with such an ambitious project. We hope the new work will provide an exciting and unusual talking point for visitors in Miami Beach. Kolkoz’s playful and ambitious work is a great way of bringing Audemars Piguet’s spirit of independence to Miami Beach and we look forward to developing further artistic partnerships in the future.”
Galerie Perrotin commented “Art Basel in Miami Beach is one of the most awaited artistic events of the year, not only for the quality of the art exhibited, but also for the charm of the city. Miami is a joyful ever-sunny destination, with charming natural landscapes and a fascinating skyline while the Miami Marine Stadium shows both sides of the city and we're very lucky to be able to exhibit ‘Curiosity’ next to such an incredible site. It is an amazing place to celebrate sixteen years of collaboration with Kolkoz and our first project with Audemars Piguet. Miami has been a source of inspiration for Samuel and Benjamin from Kolkoz, and just like the city, their art is welcoming, stimulating and unifying.”
Artists Kolkoz mentioned “‘Curiosity’ was the name that was given to the last Mars Exploration Rover. We have taken this idea of an invader exploring a foreign land and applied it to the snow covered chalet that has set off on a journey and arrived in the middle of a maritime stadium in the hot Florida sun. We are interested in looking at the chalet in its most essential form and seeing this form as a hut, or as a symbol of the beginnings of the American colonial habitat. If we look at the chalet as a representation of American colonial architecture, the artwork provides a stark contrast to the golden era of leisure in the 1970s and the elegant marine stadium of Hilario Candela. As the symbolic representation of the past, and as a bold and curious foreign explorer of the Miami landscape, the chalet has met upon the once grand stadium. There is a moment for reflection and they seem to be saying to each other ‘Look at what I’ve become’.”

About Audemars Piguet
Audemars Piguet is the oldest fine watchmaking manufacturer still in the hands of its founding families (Audemars and Piguet). Since 1875, the company has written some of the finest chapters in the history of haute horlogerie, including a number of world firsts. In the Vallée de Joux, at the heart of the Swiss Jura, numerous masterpieces are created in limited series embodying a remarkable degree of horological perfection, including daring sporty models, classic and traditional timepieces, splendid ladies’ jewellery-watches, as well as one-of-a-kind creations. The famous 1972 octagonal Royal Oak, the first luxury watch to be made of stainless steel, is widely recognised as one of the most important innovations in watchmaking. www.audemarspiguet.com

About Art Basel
Art Basel stages the world’s premier art shows for Modern and contemporary works, sited in Basel, Miami Beach and Hong Kong. Defined by its host city and region, each show is unique, which is reflected in its participating galleries, artworks presented, and the content of parallel programming produced in collaboration with local institutions for each edition. In addition to ambitious stands featuring leading galleries from around the globe, each show’s singular exhibition sectors spotlight the latest developments in the visual arts, offering visitors new ideas, new inspiration, and new contacts in the art world. Please visit artbasel.com for additional information.

About Kolkoz [Samuel Boutruche - Benjamin Moreau]
For the past fifteen years, under the name Kolkoz, Benjamin Moreau and Samuel Boutruche have been jointly creating works featuring a constant underlying play on the permeability between the real and the virtual through the use of cross-media: video, sculpture, photography and the new media. They are also founding members of La Clique, hosts to the art world and dancefloors around the world they have invented a language through music and culture that is unparalleled with their “social sculpture”, Le Baron. They have been celebrated for their contribution to contemporary art and social libations and exhibited in Mexico City, Paris, New York, Dubai, Miami. Represented by Galerie Perrotin (New York, Paris, Hong Kong), one of the most influential gallery in the industry, Kolkoz has held numerous solo and group exhibitions in UCCA Beijing, Wentrup (Berlin), Perrotin (Paris) and OMR (Mexico City) Gallery, at The Museum of Modern Art (Paris), Fondation Ricard, BASS Museum (Miami). Their artwork has been acquired for the collection of public institutions at MNAM/Centre Pompidou and The Musée d’Art moderne de la Ville de Paris in France, the Fonds National d ́Art Contemporain in Paris, France, and Colección Jumex in Mexico City, Mexico. Their work has also been acquired for private collections in France, England, Mexico, Argentina, and Dubai.

About Dan Holdsworth
Dan Holdsworth is a British photographer whose works are exhibited internationally. Born in 1974, in Welwyn Garden City, England, he studied photography at the London College of Printing, and has had solo shows at BALTIC Centre for Contemporary Art, Gateshead, and Barbican Art Gallery, London. His work has been featured in group shows at Tate Britain, London, and Centre Pompidou, Paris. He was short-listed for the Beck's Futures Prize in 2001, ICA, London. His work is held in collections including the Tate Collection, Saatchi Collection and the Victoria and Albert Museum, London. In March 2012, Holdsworth published Blackout with SteidlBrancoliniGrimaldi imprint.

Audemars Piguet’s booth at the Collectors’ Lounge at Art Basel in Miami Beach, Marine Stadium
Prior accreditation for both events is essential. Please RSVP to: catherine@suttonpr.com