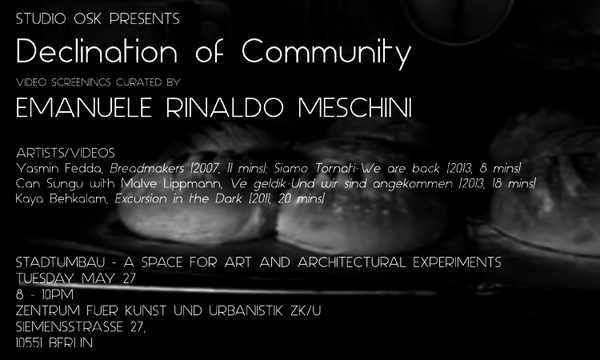 What does it means community in a world seemingly without borders and barriers ? The community is an invention or is a tradition? This micro-exhibition aims to analyze, through videos, the different aspects and the different meanings of the term community. The animation of Can Sungu and Malve Lippmann is the final result of workshops with the children and the seniors of Kinderinsel of Turkish Community House in Frankfurt about the history of Turkish Migrant Labourers in Germany. Through the story of the olders, the children have reconstructed a visual story creating collages from newspapers of the time. Even in this case, subjectivity and objectivity are joined together through the oral narration of a community. In the video Breadmakers, Fedda analyzes the issue of diversity and disability through the realization of a productive society in wich the term community is understood in its sense of inclusiveness. In the video We are Back, shooted in Rome during her residency at the British School, Fedda highlights the concept of community as something exclusive and non-guaranteed, something to conquer and build. The story tells about the occupation of the former Civil Motoristaion building in the district of San Giovanni, Fedda shed light on a new way of democratic conquest of space for the creation of self organised community. The video of Kaya Bekhalam Excursion in the Dark mix togheter the reality, the fiction and the dream of a community in struggle. Shooted in Cairo few day after Hosni Mubarak had left the city, represent the aesthetic of the artist in constant balance with reality and fiction, between rappresentation and presentation.