This popular perennial showcase of boundary-crossing performance alternatives by the best national and international creators returns for a 14th not-to-be-missed season. Copresented with the Southern Theater. 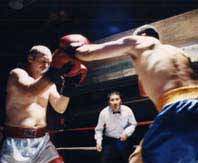 Performing Arts
OUT THERE 14

The spirit of Out There is alive and well in Boxing 2000, a new work by iconoclastic New York creator Richard Maxwell, whose directorial approach strips theater back to its minimal essentials, unearthing the poignantly dark humor and emotion that dwells in the lives of these outer-fringe American figures. Masterfully shaping silences, deadpan dialogue, and perhaps the most unusual boxing match ever staged, this oddly compelling modern-day urban fable offers a slice of life inside and out of the ring. One of the freshest theatrical innovators working today, Maxwell is in demand throughout Europe and around the world.

Presented in association with the National Performance Network (NPN).

"Ever get the feeling you've been cheated?"--Johnny Rotten, San Francisco, 1978

Rock-cultural critic Greil Marcus' book, Lipstick Traces: A Secret History of the 20th Century, has not only been acclaimed as an unparalleled celebration of punk rock, but as one of the great commentaries on radical 20th-century cultural movements. In this uproarious theatrical adaptation created by Texas-based performance collective Rude Mechs, Sex Pistols manager Malcolm McLaren joins manic Dr. Narrator to trace those spontaneous, outrageous movements in our culture that raised no monuments. When our guides come to doubt the truth of history, they search for its alternative, and ask its selling price as a commodity. "A rock concert for your head . . . loud, defiant, informative, funny, literate, physical, and quick." Austin Chronicle.

Zuidelijk Toneel Hollandia, among the boldest and most provocative theater companies to emerge in recent years from Europe, presents a mesmerizing one-man performance work by Dutch actor Jeroen Willems. The many faces of power are revealed in shocking detail in this piece based on texts by Italian writer-filmmaker Pier Paolo Pasolini with added material from speeches by a former Shell Oil chairman. Voices explores the dark underbelly of globalism with theatrical verve as Willems portrays distinct characters gathered late at night around a banquet table, morphing from scientist to high-powered businessman to stilettoed vamp to God and the devil incarnate.

The Walker Art Center is a catalyst for the creative expression of artists and the active engagement of audiences. Focusing on the visual, performing, and media arts of our time, the Walker takes a global, multidisciplinary, and diverse approach to the creation, presentation, interpretation, collection, and preservation of art. Walker programs examine the questions that shape and inspire us as individuals, cultures, and communities.
Walker Art Center 725 Vineland Place Minnesota 55403
Minneapolis
612.375.7622