The exhibition is curated by Lisa Henry, and it features the work of four contemporary artists, who have all undertaken long-term projects that investigate landscape, architecture and location throught the Unites States. Other than Susanna Pozzoli, On Site presents the work of Sheila Pree Bright, Stella Kalaw and Lauren Woods. 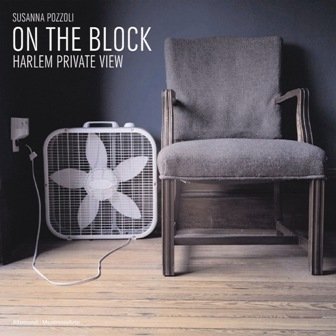 The UCR Museum of Photography of California was founded in conjunction with the University of California Riverside.
The Museum recently collaborated with Digital Studio and together they launched a project entitled Off the block in order to involve local high school students. Off the block offers a menu of core resources and activities – such as exhibitions, workshops, artist residencies and lectures - from which high school students can select a focus and level of participation.

The UCR Museum of Photography of California invited the artist Susanna Pozzoli, Raffaele Bedarida and Teresa Meucci, curators of HSF by MA, and Ruggero and Francesca Montrasio, founders of the residency program, in order to curate a site-specific project during the first week of April 2010. This project will consist of involving two hundred LA high school students, who will be personally accompanied by the artist Susanna Pozzoli and HSF by MA staff to photograph the interiors of the houses in the surrounding area of the Museum, following the main idea behind Pozzoli’s photographic series On the block. Harlem Private View. Therefore, students will benefit from developing a personal portfolio for use in applying to college or for employment in the creative sectors.

Furthermore, the second group show organized within the project Off the Block will be inaugurated on April 1st 2010 at the UCR Museum of Photography of California. The exhibition, entitled On Site (April 1st – June 19th 2010), is curated by Lisa Henry, and it will feature the work of four contemporary artists, who have all undertaken long-term projects that investigate landscape, architecture and location throught the Unites States. Other than Susanna Pozzoli, On Site will present the work of Sheila Pree Bright, Stella Kalaw and Lauren Woods.

On the occasion of the openign on April 1st, the book On the Block. Harlem Private View, - curated by Raffaele Bedarida, will be introduced by the curator Lisa Henry, Artistic Director of the UCR Museum of Photography of California. As a completion of the opening, will be a book signing, a conversation between the artists and the Director of the Museum and a speech by Teresa Meucci, who will present the HSF by MA residency program to the public.

Susanna Pozzoli (1978) Born 1978 in Italy. After studying literature at Bergamo University, I left Italy to continue my studies at the Université la Sorbonne in Paris, where I lived for five years. Working in parallel with my university studies I developed my skills as a photographer, working as an assistant and becoming a member of the Atelier Reflexe, an independent photography school in Paris. I took part in many exchanges, shows and residency programs at various European schools. In 2004, I moved to Barcelona thanks to a European grant and in 2006 I resided in Milan. In July 2007, I moved to New York as a guest of the Harlem Studio Fellowship art residence and decided to stay in the US longer. I now live and work in New York and Milan. Harlem Studio Fellowship by Montrasio Arte is a privately funded non-profit Residency Program for international artists, ideated by Ruggero Montrasio and Gianluca Bianco. HSF by MA is directed by Francesca Montrasio, and curated by Raffaele Bedarida and Teresa Meucci.

Harlem Studio Fellowship by Montrasio Arte
The project, started in 2007, is designed to encourage the creative, intellectual and personal growth of emerging visual artists. HSF by MA invites two or three young artists every three months, providing them with housing and studio in an exceptional townhouse in the district of central Harlem.

Every residency ends with a group exhibition, displaying works and projects accomplished by each artist during his/her stay in New York. In addition to this, a complete show of the artists in residence will be held at the end of the first 3 years. Finally, the first catalogue of a three-volume series (each volume will cover one year) is being prepared presenting a selection from all the artists in residence. Published by Silvana Editoriale and Montrasio Arte (Milan, Italy), the book will have texts in English and Italian as well as it will be widely distributed in Europe and the US.

Over the past three years HSF by MA has invited twenty-four artists from all over the world: Italy, Israel, Sweden, France, Korea, Germany, Hunghery, Japan, Africa and United States. Most of them are increasingly receiving an international recognition.
During the first three years of activity, HSF by MA had the pleasure to invite also writers and musicians, such as Marco Mancassola, Mattia Signorini, and young curators as Daniele Astrologo Abadal, Lorenzo Giusti, Margherita Romagnoli e Davide Lacagnina.
From 2009 HSF by MA started a collaboration project with Mongin Art Center of Seoul, and from 2010 with the Bezazel Academy of Jerusalem.

HSF by MA is also undergoing intense editorial activity. Furthermore, the program is going to inaugurate a second international artist residency in the city of Detroit, which will be curated by Daniele Astrologo Abadal, Teresa Meucci and Mattia Signorini, and coordinated by Francesca Montrasio.

Publisher Umberto Allemandi founded in 1983, is one of the most renowned Italian publisher for art and architecture. Among its authors: John Pope-Hennessy, Clement Greenberg, Federico Zeri, Michael Jaffé, Francis Haskell, Jean Clair, Carlo Olmo, Rafael Moneo, Ignasi de Solá-Morales, Renzo Piano, Vittorio Gregotti, ecc. It also publishes exhibition catalogues for museum and galleries such as the Museum of Modern Art of New York, the Musée D’Orsay of Parigi, Palazzo Grassi in Venezia, the Poldi Pezzoli of Milan and the Modern National Gallery in Rome.