Femininity and Masculinity in the Art of Eastern Europe 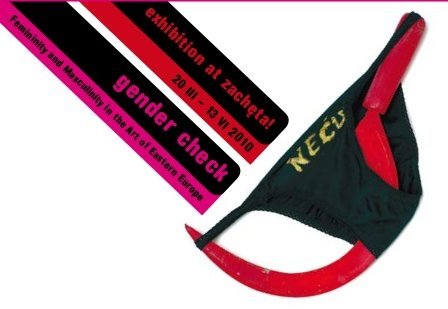 Gender Check is the first comprehensive exhibition featuring art from Eastern Europe since the 1960s based on the theme of gender roles. 20 years after the fall of the Berlin Wall, the curator Bojana Pejić, along with a team of experts from 24 different countries, has put together a selection of over 400 works including paintings, sculpture, installations, photography, posters, films and videos. With over 200 artists, the exhibition paints an exceptionally diverse picture of a chapter in art history that until recently had been largely unknown and that could also act as an important addition to contemporary gender discourse.

Gender Check follows the changes in the representation of male and female role models in art – especially as they develop under different socio-political conditions. The exhibition, initiated and supported by the ERSTE Foundation, shows the interrelationship between art and history following both a chronological and thematic approach:

Up into the 1960s, heroic male and female workers were the dominant figures in the socialist realist tradition of art. The intended reality-transforming program of a "sexless society" propagated by the state was met with irony and unmasked by unofficial art at the time. Following the period of collective state utopian aesthetics, different individual and more open tendencies could be found on a local level – periodically provoking a hostile response – that created independent spaces for nonconformist art. Beginning in the 1970s, ideals of femininity and masculinity were reexamined beyond the propagandist clichés of the past: Self-portraits and representations of the body and subjectivity began to hint at a newfound self-confidence also reflected in openly displayed sexuality that called heterosexual standards and heroic ideals of masculinity into question. Even many of the abstract pieces worked with anthropomorphic forms and the relationship between the sexes within society.

The emancipation from role models went along with an emancipation from traditional means of expression, as new media and art forms like photography, film, video and performance became increasingly important. At the same time, more and more female artists began to gain in prominence.

With the fall of the wall in 1989 and the end of socialist regimes, new challenges became evident in the face of rising nationalism and neoliberal influences from the west. The newly won freedoms came hand in hand with neoconservative role constraints that soon also became the topic of artworks. A critique of chauvinist, militaristic, misogynist and xenophobic ideologies were expressed in the context of feminist theory. Homosexuality began to be brought up. Clichés about motherhood and traditional religious-inspired ideals of femininity and patriarchal power structures came under critique. To underline the political and public significance of female identity, allusions came to be made to historical allegories of femininity.

The exhibition initiated and supported by ERSTE FOUNDATION

The exhibition supported by the Ministry of Culture and National Heritage