Andreas Gursky presents a series of works represents an important new development in artist's practice, in which he reassesses the way he works with photography. Evolving from the work of twelve conceptual artists, filmmakers and photographers presenting alternate interpretations of fictional geographies, imaginary sites and 'mash-up' destinations, the exhibition Rethinking Location reconsiders the notion of location. 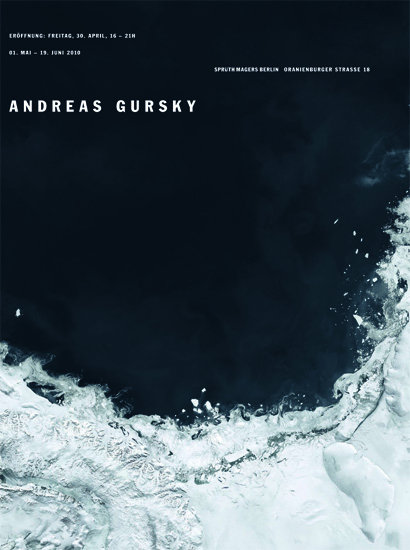 Monika Sprüth and Philomene Magers are delighted to present an exhibition of new works by Andreas Gursky in Berlin. The series of works represents an important new development in Gursky's practice in which the artist reassesses the way he works with photography.

Like many of Andreas Gursky’s works, the new, six-part series Ocean I-VI (2009-2010) goes back to a spontaneous visual experience. As the artist relates, while flying one night from Dubai to Melbourne he stared for some time at the flight monitor: the Horn of Africa to the far left, a tip of Australia to the far right – and there in between the blue void. Then all of a sudden he saw the graphic representation on the monitor as a picture.

The path from diagram to large-scale photographic work proved to be very involved. Gursky used high-definition satellite photographs which he augmented from various picture sources on the Internet. The satellite photos are restricted however to exposures of sharply contoured land masses. Consequently the transitional zones between land and water – as well as the oceans themselves – had to be generated completely by artificial means. Given that they make up by far the largest part of the works, this resulted in a gigantic project that only compares with the efforts Gursky lavished on the series F1 Boxenstopp (2007). That all these pieces nevertheless convey the feeling of real subaquatic depths is due solely to the precision of Gursky’s visual work. He even consulted shoal maps to get the right colour nuances for the water surfaces.

At second glance one realises however that Gursky’s interest in the image is not cartographic in nature. The distances between the continents do not follow any systematic programme, such as “Google Earth” offers, but are slightly shortened or elongated according to compositional principles. But above all Gursky’s works foreground aspects that cartography only deals with schematically and quite incidentally, because they are of little economic merit: the seas. Steeped in midnight blues that depart distinctly from the colours for depicting seas on maps, Gursky gives his oceans a dimension of the sublime that is only otherwise to be found in painted seascapes.

If one peruses the old cosmogonies, the Earth first gained its countenance as the elements earth and water were delineated from the undifferentiated and formless mass; only then did the seas and landmasses start to mutually distinguish themselves. Seen in this light, it comes as no little comfort that landmasses and stretches of ice appear at the edges of Gursky’s pictures. In view of the yawning chasms that open up at the centre of the works, they grant the eye a foothold and orientation. But conversely the oceans gain their overwhelming power from the contrast to the landmasses that shine out from them in all their sharpness and wealth of detail.

By shifting the shapeless and ungraspable aspect of the oceans to the centre of the works and permitting only the edges and fragments of the continents to be viewed, Gursky goes beyond the representation of the cosmos as an orderly structure: they grow here from the heart of it is an indefinable, unnamed menace. With this the artist addresses a very topical attitude towards life: the feeling of hopelessness of ever trying to restore the old order of the cosmos when faced with mankind’s progressive destruction of nature. Gursky’s Ocean I-VI seems to anticipate a state of the world in which it has once again been rendered uninhabitable. And the only one of the pictures that features a continent at the centre – Antarctica – acts by way of a complement to the other motifs in the cycle. Since time immemorial every bit as hostile as the sea, under the portents of global warming this continent now seems to be raising an apocalyptic finger, for all the beauty in its details.

By casting a distant eye on the world as a whole and simultaneously featuring the peripheries rather than the centres, the works stand in the way of economic interests and amenability. From the midnight blue of the formless, which we associate with superhuman magnitude, we gain instead an idea of a world quite unamenable to our desires. And with that the latest works from Andreas Gursky move to the forefront of the contemporary discourse.

Evolving from the work of twelve conceptual artists, filmmakers and photographers presenting alternate interpretations of fictional geographies, imaginary sites and ‘mash-up’ destinations, the exhibition Rethinking Location reconsiders the notion of location. In a era characterized by a rapidly changing perception of time and space due to ever increasing mobility, migration and globalisation, our understanding of what a location is has significantly tranformed. Taking these changes for granted, the exhibition investigates how artists consider location and geography as source material for their work.

The work of Rosa Barba and Taryn Simon often derives from an interest in unusal places or improbable situations: Barba´s film The Empirical Effect (2010) explores a geographical ‘Red Zone’: weaving a fiction around the Vesuvio Vulcano, her film was shot during an actual evacuation test and, on another level, points towards the complex relationships between society and politics in Italy. Collaborating with the scientific research laboratory Osservatorio Vesuviano in Naples, Barba creates a fictional documentary including surveillance cameras, seismographs and early archival material of Napels by the Lumière Brothers. Empathising with the role of a contemporary ethnographer, the work of New York based photographer Taryn Simon oscillates between an aestheticized realism and collective memory. The works shown in Rethinking Location symbolically refer to sites of geopolitical weight, such as the interior of Fidel Castro’s Palace of the Revolution in Havanna and night shots of a checkpoint between Jerusalem and Ramallah on the West Bank.

In his work Cyprien Gaillard alters the hierarchy of geographical sites and their representative value by detaching them from their original connotations: it deconstructs and conflates actual landscapes perpetuated by a spirit of anachronism and ruin of both past and present. His Fields of Rest series (2010) evolves around decomposed architecture of Second World War bunkers at the coastlines of the French Normandy.

Paul Sietsema’s 16 mm films, drawings and sculptures bridge color, space and movement through subjects spanning a broad geographic and temporal range. Over the last years, Sietsema has gathered archival photographs of artifacts of ‘lost cultures’, often from rare anthropological and ethnographic books. The artifacts he examines and transcribes into his own work often derive from western colonialism, industrialisation and geographic explorations including Oceania, South Asia and Africa. In his film Analyse d´une épave (2008) he traces a shipwreck, capturing its ruins on celluloid like timeless sculptures of a lost cultural memory.

Recalling thoughts by Bourriaud of the artist as Semionaut, treating geography as source material for new work, the drifting and the displacement between different cities allows artists to enter multi-dimensional, seminal dialogues within different contexts. Within both a local and global artistic practice charted by increasing displacement, expeditions, distances and routes are elements that become incrementally significant.

Interested in topographies of detachment and displacement, Aramando Andrade Tudela explores the notion of ‘tropical abstraction’. Referring to the potential of 1960s utopian modernist architecture from South America, his 16 mm film Espace Niemeyer (2007) takes place in the headquarters of the French communist party in Paris. Shot mostly in close-up mode, Tudela transformed the site built 1967–1972 by Brazilian architect Oscar Niemeyer into a ‘non-place’: a fictional site without geographical foundation.

Koo Jeong-A creates mythologies and imaginary sites within the logic of existing places. Her work often gives prominence to the hidden, the ephemere and the invisbile. For the exhibition Koo Jeong-A produced a new series of works, consisting of geological and social layers where maps, drawings and signs extend to a notional geography. Furthermore, she created a site specific, secret location yet to be discovered in the exhibition.

Andreas Hofer´s work overlaps science fiction, scientific research and popular culture. Often evolving around early film noir, comics and crime literature, his multi-media installation Robert and Matt Maitland (2010) responds to the notion of the artist as an explorer. His work in the exhibition archly superimposes the protagonist from J.G. Ballard´s 1974 science fiction novel Concrete Island and the setting of a geographic exploration from a 1950s comic classic. By blending two originally detached storylines, Hofer proposes a new imaginary landscape.

Today intersections between actual sites, mass media and communication technology transform places into virtual ‘mash-up’ locations: archipelagos of alternating signs oscillating between the actual and the virtual. Moreover, the internet has significantly increased the presence of maps and navigation systems in our thinking. For example, it has become easier to generate maps, to share and alter them, and to create them collaboratively (e.g. GPS and geotagging systems like Google Maps and Google Earth).

The art of Trevor Paglen blurs the border of art, science and politics. Holding a Ph.D. in geography and operating at UC Berkeley´s geography department, Paglen uses data analysis, advanced research skills and state-of-the-art photo observation techniques to map the terrain of American military secrets. He appropriates scientific imagery and discourses of astronomy to provide the framing for what he calls an ‘experimental geography’. In his series The Other Night Sky (2008) Paglen turns our attention to some 189 secret intelligence satellites operated by the U.S. military to keep most of the world under surveillance.

The juxtaposed positions within Rethinking Location express a vast area of interconnected ideas and systems in a world where places are increasingly rearticulated and interrelated. Fostering an interdisciplinary approach, the exhibition aims to serve as inspiration to reconsider what the notion of location implies today. After the recent emphasis on networks and communities, could the focus now shift to location as a new key dimension?

Organised in cooperation with Image Movement, the exhibition will be accompanied by a film program focusing on Land Art.