Works from the early 1980s to 2015 by Jenny Holzer, Barbara Kruger, Louise Lawler, Cindy Sherman and Rosemarie Trockel. The exhibition uses the two Eau de Cologne magazines and shows, at Monika Spruth Galerie in 1985 and 1987, as its point of departure. 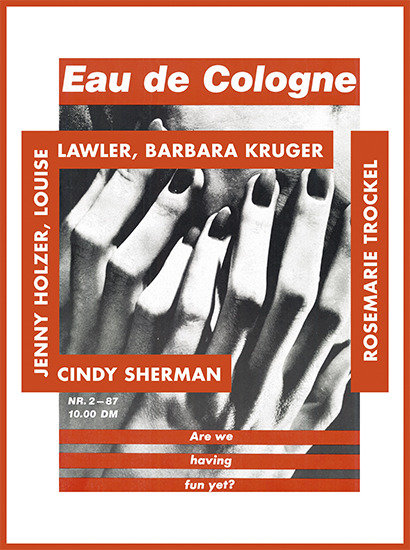 This group exhibition at Sprüth Magers Berlin shows works from the early 1980s to 2015 by Jenny Holzer, Barbara Kruger, Louise Lawler, Cindy Sherman and Rosemarie Trockel. These five artists have been working with Monika Sprüth since the foundation of her gallery in Cologne in the early 1980s and have been closely connected to the gallery ever since. Between 1985 and 1989 Monika Sprüth published three issues of the magazine Eau de Cologne, which featured Holzer, Kruger, Lawler, Sherman and Trockel, as well as portraits, interviews, conversations and essays with many other contemporary German and American women artists, writers and thinkers associated with the art world at the time. The cover of the second issue of the magazine, designed by Barbara Kruger and published in 1987, was used as a template for the invitation of this show. The exhibition uses the two Eau de Cologne magazines and shows, at Monika Sprüth Galerie in 1985 and 1987, as its point of departure.

In 1996, Barbara Kruger produced a series of grainy black-and-white prints as templates for a project in the British magazine Dazed & Confused. These full-page portraits also featured vibrant red text boxes that appear to reveal the thoughts of the depicted person. The original prints are exhibited here, in a new order that the artist revised for the exhibition.
Perspectives and viewpoints have always been key to the work of Louise Lawler, and never more so than in the “adjusted to fit” works, where she remakes existing works as wall vinyls, expanding them to the available architecture and wall space. (Bunny) Sculpture and Painting (adjusted to fit) (1999/2015) shows a view in the Whitney Museum of Jeff Koons’ Rabbit (1986) and Peter Halley’s The Acid Test (1991-92).

Shown this year at the Kunsthaus Bregenz, Rosemarie Trockel divides her prints into three major groups, calling each selection of motifs and forms a ‘CLUSTER’. She has created a new set of combinations for the exhibition. Emerging from snapshots of her daily studio life as well as images that reference her own past artworks, she carefully combines these pictures with images of artists, friends, historic figures and events. The resulting groups of digitally altered images conjure a diverse range referential systems and ideas. Tisch 7 (2008), exhibited amongst the prints, is a white ceramic table with two thick, human-shaped legs that evoke the limbs of a kneeling figure.

Cindy Sherman often uses abrupt shifts in composition to create a mood of disquiet, a practice she has expanded for a new body of photographs. Adapting unpublished images from previous series, the artist constructs new multi-image or multi-panel works. Sherman’s interest in the bizarre and grotesque achieves particular intensity here, where she revisits the tightly clustered hang approach of her travelling exhibition Untitled Horrors (2013/2014).

The 60 hand-coloured enamel plaques by Jenny Holzer were created in parallel to her Living series, between 1980 and 1982, and are shown here as a large, coherent block. The square white plaques contain red and black text, written in the tone of a factual report, with observations, hints or warnings about the perception of the body, oneself, relationships, people and landscapes, rules, expectations, and everyday desires and fears. These texts also appear inscribed on granite benches, which stand in a row in front of Lawler’s wall work, while also interacting with Trockel’s ceramic table. The LED, with its black casing and green and red text, belongs to the series ‘Under a Rock’ (1986). This series outlines the effects of the era’s escalating militarism, and the machismo that fuels that escalation.

The exhibition as a whole is bound by references to each of the artists’ practices, to art history and to present-day social problems. The core question of perception and depiction foregrounded by the works, across the range of dates and the diverse media, mirrors a recurrent discourse in art history at large, and corresponds to the overall focus of the gallery’s program.