Art and Globalization. The show brings together the work of artists from five continents who find experimental ways of capturing the processes of globalisation, and its human consequences in various regions of the world. The artists all depart from the conventional methods of current affairs journalism. They do not pretend to be completely objective, and they aim to represent the fabric of lives affected by global flows, rather than capturing the instant, sensational image. With work by: Azzellini & Ressler, Ursula Biemann, Oyvind Fahlstrom, Steve McQueen, Cildo Meireles, Yang Zhenzhong... 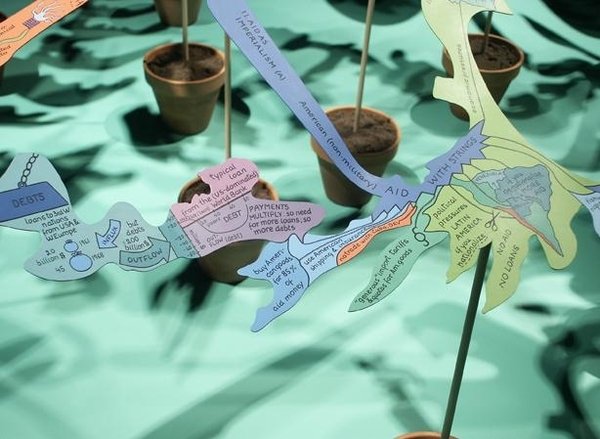 Uneven Geographies brings together the work of artists from five continents who find experimental ways of capturing the processes of globalisation, and its human consequences in various regions of the world.

Globalisation is the name given to the new integrated world economy, where money, products and people all move between countries faster than ever before. It is an economic system so complicated that it is almost unaccountable. Who makes the things we buy? Where do they do it? And who takes the financial decisions that affect our jobs, housing and public services? The media often struggles to explain relationships that are so removed from the consumer. How can we ensure that no child labour is used in the goods we buy, for instance, when our branded products pass through a whole series of outsourced companies? And why is it that war and natural disaster now offer yet more opportunities for hyper capitalism?

The artists in Uneven Geographies all depart from the conventional methods of current affairs journalism. They do not pretend to be completely objective, and they aim to represent the fabric of lives affected by global flows, rather than capturing the instant, sensational image. Whether using film, installation or sculpture – or experimenting with maps, flow-charts and diagrams – all aim to make the networks of power, profit and exploitation very visible. In the process they are helping to devise a new language to confront globalisation. The images in the film Gravesend, made by the Turner Prize winner Steve McQueen, reveal the disparity between mining the valuable mineral coltan in the impoverished and war torn Congo, where it is hand hewn out of bare rock, to its eventual processing by pristine machines in Derby, before it is used in all mobile phones and computers.

Some of these interventions into global networks are playful, such as Cildo Meireles’ 1970s Coke bottles and bank notes, doctored with anti-US slogans and put back into circulation - at a time of military dictatorship in Brazil, and of contentious US influence in Latin America in general. Öyvind Fahlström, another early pioneer of geopolitical art, was also born in Brazil. His Garden - A World Model is installed in a glowing green room where visitors can relax on cushions amongst the plants, deciphering the stories of injustice on their leaves.

The Mexican artist Éduardo Abaroa contributes beautifully ragged globes, perforated by thousands of pins, or draped with globally produced clothes. His other surprising art work is a tank of African clawed frogs that relates to the colonisation of language by invaders.

In the globalised world it is difficult to pinpoint power. Sprawling corporations evade effective control by democratically elected governments. Yet they may have close ties to political parties, particularly those that advocate “neo-liberalism” - deregulating financial markets, privatisation and the massive scaling down of public spending. Goldin+Senneby’s Headless is a quest for an anonymous corporation, headquartered in the Cayman Islands tax haven. Mark Lombardi’s intricate diagrams are the outcome of his painstaking research into hidden lines of power – unearthing historical ties, for instance, between Osama bin-Laden and George Bush Senior. Made after five or six research stages, his works are not so much trees of knowledge as dense root systems. If maps were originally made to take power, to control territory and subdue its occupants, Uneven Geographies features a counter-cartography – one that draws to the surface tangled and concealed power relationships. The Fool’s Cap map of the world, a disturbing image dating from around 1580, lent by the Ashmolean Museum, is an early forerunner of this creative cartography.

Ironically, global corporations often enjoy optimum conditions in authoritarian countries where markets may be free but human rights violations are rife. In Yang Zhenzhong’s video Spring Story workers at a hi-tech electronic factory recite a famous speech of Deng Xiaoping’s. Given in 1992, it announced the Chinese communist party would adopt the principles of the market economy.

Wherever it is situated globalisation has created gross inequality - staggering wealth alongside abject poverty – whether that is between countries, or inside them. The writer Saskia Sassen has shown how “global cities” have marshalled an army of low paid immigrant workers to service the luxury lifestyles of the international financial sector. Mladen Stilinović’s art work 3 starkly demonstrates how the combined wealth of the three richest people on the planet equals the combined income of 600 million of its poorest people.

Lastly Uneven Geographies offers signs of hope, as well as resistance. Azzellini and Ressler document the rise of worker’s co-operatives in Venezuela, while Bruno Serralongue’s photographs follow the grass roots campaigns of farmers in southern Mexico. A second series of his photographs document the World Social Forum and its offshoots. Set up to oppose the World Economic Forum, the movement has now become a global affiliation. Its motto could equally apply to the Uneven Geographies exhibition: “Another world is possible.”

Usula Biemann is showing two other projects in Nottingham until 15 May. Cryptomnesia are presenting X-Mission and Contained Mobility at One Thoresby Street in Sneinton. They are open Wednesday to Sunday and are 10 minutes walk from Nottingham Contemporary.

The Geopolitical Turn
What are the reference points for contemporary art in a global economy that creates enormous wealth as well as widening inequality. Our opening conference explores the many strategies artists use to reveal the processes and human consequences of the globalised market economy. Introduced by the exhibition’s co-curator T.J. Demos – writer, curator and lecturer at University College, London – the conference includes artists George Osodi, Ursula Biemann, Dario Azzellini, Oliver Ressler and Bureau d’Études.

Other speakers include Alfredo Cramerotti, author of Aesthetic Journalism and co-curator of the next Manifesta exhibition; Angus Cameron, the official "emissary" of artists Goldin+Senneby and a lecturer in Human Geography at the University of Leicester; Janna Graham, artist and curator; The University of Nottingham’s Alex Vasudevan and Mark Fisher, author of Capitalist Realism; Is There No Alterative? Together they will examine the challenges of representing globalisation, and what’s at stake when artists engage with geopolitical issues.