Major works from the Architectures, Seascapes and Pinetrees series, organized by Kunsthaus Bregenz. A co-operation between The Fruitmarket Gallery, widely recognised as Scotland's leading international contemporary art space, and Stills, the nation's pre-eminent resource and gallery centre for photographic and digital media. The Edinburgh International Festival event marks the inaugural production of large-format work by Sugimoto whose only tool is a wooden 19th century American box camera with constant settings 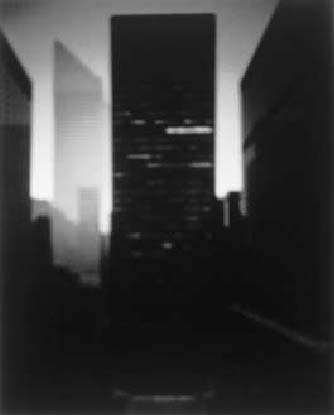 World-leading photographer Hiroshi Sugimoto receives the first major solo showcase of his work in the UK this summer across two award-winning Scottish galleries, The Fruitmarket Gallery and Stills, Edinburgh.
Opening Saturday 3 August, Hiroshi Sugimoto, The Architecture of Time is a co-operation between The Fruitmarket Gallery, widely recognised as Scotlandâ€™s leading international contemporary art space, and Stills, the nationâ€™s pre-eminent resource and gallery centre for photographic and digital media.
The Edinburgh International Festival event marks the inaugural production of large-format work by Sugimoto whose only tool is a wooden 19th century American box camera with constant settings. Only one copy of each silver gelatine print will be created for The Architecture of Time and will not be seen again until an American retrospective of work touring the USA in 2003. More than thirty works will be on display, from three key photographic series that continue to direct the New-York based artistâ€™s vision and consistently reflect his enormous tonal range and themes of the co-existence of the corporal and spiritual, and the paradoxes of time. Architectures (1997) and Pinetrees (2002), specifically realised for this exhibition, will be on display at The Fruitmarket Gallery. Seascapes (1990) will be mounted at Stills, a two-minute walk from The Fruitmarket Gallery.
Architectures (1997) comprises twenty-one silver gelatine prints, each 182 x 152cm and depicts iconographic landmarks ranging from Casa BatllÃ³, Antoni Gaudi, 1998 and Asahi Breweries, Philippe Starck, 1997 to Seagram Building, Ludwig Mies van der Rohe, 1997 and Chapel of Notre-Dame- Du-Haut, Le Corbusier, 1998.
Pinetrees (2002) comprises two magnificent silver gelatine prints, each 750 x 182 cm and in six parts. The series is inspired by traditional Japanese ink painting, and particularly references the work of 16th century painter Hasegawa Tohaku.
Seascapes (1990) features beguiling oceanic views taken in the last twelve years of the twenty-two year series from locations around the globe including Aegean Sea, Pilon, 1990, Celtic Sea, Boscastle, 1994 and Sea of Japan, Rebun Island, 1996.Technically defined by Sugimoto as â€˜the most difficult pieces,â€™ the works convey timelessness as the artistâ€™s primary focus. Hiroshi Sugimoto will attend the private vew of The Architecture of Time which will be opened on 2 August by The Consulate-General of Japan, Mr Tsutomu Hiraoka.
About 35,000 visitors are expected to visit this monumental exhibition that has been organised by the Kunsthaus Bregenz, Austria, and follows Sugimotoâ€™s receipt last year of the prestigious Hasselblad Foundation International Award in Photography.

The Fruitmarket Gallery was personally chosen by Sugimoto to chronicle his body of work for the first time for British audiences. Graeme Murray, director of The Fruitmarket Gallery, described the exhibition as a significant milestone in the life of the gallery programme. "We are delighted and honoured to display works by an artist of the calibre of Hiroshi Sugimoto. His work stands as a significant testament to the icons and internal spaces of 20th century architecture and the unique exhibition format will resonate with a new power for festival audiences."
Accompanying the works will be a comprehensive exhibition education guide, artists' talk and exhibition hard-back catalogue priced at Â£25, representing the most substantial record of Sugimotoâ€™s work to date with texts provided by Thomas Kellein, Eckhard Schneider and Hiroshi Sugimoto. During the exhibition, Stills will exhibit new works from Fairbridge Edinburgh and Corstorphine Youth Centre produced in collaboration with artists Catriona Grant and Lindsay Perth. A response to Sugimoto's Seascapes, Daytrippers, features humourous observations of the Scottish seaside visitor and is part of Stills Youth Training Programme set up with Youthlink Scotland.
Born in 1948, Hiroshi Sugimoto left Japan in 1970 to study Photography at the Art Center College of Design in Los Angeles. In 1974, he moved to New York where he was influenced by the minimal and conceptual movements around Carl AndrÃ© and Dan Flavin. Two years later, he began to produce his six on-going series of works, Dioramas (1976- ), Theatres (1978), Seascapes (1980), Wax Museums (1994), Sanjusangendo, Hall of Thirty-Three Bays (1995) and Architectures (1997).
Sugimoto has exhibited widely over the last twenty years including solo shows at the Metropolitan Museum of Art, New York; La Caixa, Madrid; the Kitakyushu Project Gallery, Japan and the Deutsche Guggenheim, Berlin.
Stills is both an exhibition space, and education centre, exploring image processing with the work of emerging and established artists, and offering The Richard Hough Resource, a digital and photographic facility and meeting place for individuals and groups. Stills is the recipient of the Chrisi Bailey Award 2000 (Photography and Digital Imaging with Young Children).

A previous winner of the Prudential Award for the Arts (Visual Arts category), The Fruitmarket Galleryâ€™s mission is to bring the work of international artists to Scotland and exhibit Scottish artists in an international context to engage with contemporary issues.The gallery provides a dynamic education and events programme and runs a highly successful national and international touring programme. The galleryâ€™s award-winning design by architect Richard Murphy comprises two gallery spaces, a bookshop and cafÃ©.