The exhibition focuses on a particular art film genre in which footage is produced by creating images directly on film stock. As opposed to other forms of experimental film, the material is removed from its conventional context of use and, interpreted as a canvas by applying diverse artistic processes: painting, collage on celluloid, scrapes and scratches in the emulsion, defamiliarization through chemical manipulations, or the direct exposure of the photosensitive material. In a world pervaded by immaterial digital media, especially younger artists are discovering the aesthetic character of celluloid as a material. 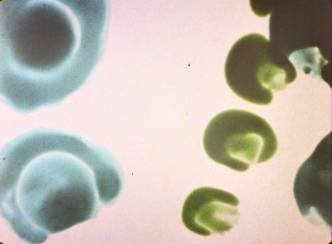 In its exhibition "Celluloid. Cameraless Film", on show from June 2 to August 29, 2010, the SCHIRN focuses on a particular art film genre in which footage is produced by creating images directly on film stock. As opposed to other forms of experimental film, the material is removed from its conventional context of use and, as it were, interpreted as a canvas by applying diverse artistic processes: painting, drawing, collage on celluloid, scrapes and scratches in the emulsion, defamiliarization through chemical manipulations, or the direct exposure of the photosensitive material. Thus even the early days of avant-garde film saw works that also investigate the filmic image in its material qualities and fathom its relationship to fine arts in ever-new approaches. Inviting the visitor to follow its varied course, the exhibition presents outstanding examples of cameraless film and offers a panorama from the 1930s to the present day with works by 21 international artists and film makers such as Stan Brakhage, Tony Conrad, Cécile Fontaine, Len Lye, Norman McLaren, Dieter Roth, Harry Smith, José Antonio Sistiaga and Jennifer West.

Applying paint to celluloid for coloring black-and-white films had been a current arts-and-crafts technique since the first days of cinematography. Yet it was only with the emergence of the film avant-garde that experiments with color and blank film stock became relevant as a generative principle of film production. The earliest hand-colored films were created by the Italian Futurists Arnaldo and Bruno Ginanni-Corradini between 1910 and 1912. Entirely in accordance with the spirit of their day, the painters were looking for a form of pure visual abstraction based on the principles of music and were fascinated with the novel possibilities film offered for creating a "music of colors." Unfortunately, only detailed descriptions have survived from their nine direct animations painted on transparent celluloid. In the early 1920s, the Surrealist photographer Man Ray was the first to use the rayogram technique, i.e. the direct exposure of objects on photographic plates – a method he had already tested – in film for some sequences of his "Retour à la Raison" (1923).

The New Zealander Len Lye (1901–1980) and Norman McLaren (1914–1987), a native Scotsman, who, pursuing different approaches, began to explore the possibilities of producing films without a camera more systematically in Great Britain in the mid-1930s and whose works became a landmark for future film artists, are regarded as the actual pioneers of the so-called direct or cameraless film. Len Lye’s film "A Colour Box" (1935), which the artist painted directly on the filmstrip, using stencil plates to color the abstract forms, is considered to be the work which established the genre of cameraless film. Synchronized to a popular Latin American tune, the film with its bright powerful colors, unusual textures, and the characteristic vibrations and pulsations of its projected images stood out against all hitherto known results in the field of art film.

The tradition of direct animation was particularly taken up in the US postwar avant-garde film. Artist, film maker, folk music collector and occultist Harry Smith (1923–1991) was one of the most colorful protagonists of the genre here. In the late 1940s, he discovered hand-colored film as a possibility to combine his mystically inspired painting with his interest in music. Influenced by Wassily Kandinsky’s works and theories, drug experiences, and Eastern philosophy, Harry Smith produced a number of abstract films of impressive complexity by painting and using intricate stamping techniques – films whose rhythmically pulsating forms and colors create multi-sensory, proto-psychedelic pictorial worlds.

The American film maker Stan Brakhage (1933–2003) – one of the key figures of experimental film in general – repeatedly dedicated himself to cameraless film processes in different periods of his career, which spanned about fifty years. His film "Mothlight" of 1963, a radically personal meditation on life and death, already relied on the direct, cameraless approach for its powerful effect. The dancing flickering composition of moth wings, grasses, blossoms, and leaves ranks among the few classics of experimental film today and is to be regarded as a key work in the history of direct animation. It is the first time that material objects provide the visual substance of a film image. Like in an artist’s collage, Brakhage arranged the translucent insect wings on the transparent film stock according to basic rules of music and thus produced film images – structures, forms, and colors of fragile beauty – which could hardly have been obtained by using a camera.

Since the 1960s, numerous artists and avant-garde film makers have devoted themselves to direct film experiments. The gamut of works ranges from the Basque painter José Antonio Sistiaga’s (*1932) vibrating and permanently changing color worlds comprised of thousands of minutely executed individual drawings to Dieter Roth’s (1930–1998) sequences of letters scratched into black film. In many cases the film makers also fall back on found footage which they appropriate by painting on it, scratching it, writing on it, or by applying a number of other physical or chemical defamiliarization processes. The German artist collective Schmelzdahin’s (1983–1989) works are frequently based on the transformation of foreign material by means of chemical, bacteriological or thermic manipulations of the emulsion. The French film "Ville en flamme" that provided the material for Schmelzdahin’s "Stadt in Flammen" of 1984 was buried in the ground for one summer, for example, where it was exposed to a natural process of decay. Subsequently, the fragile damaged material was worked on with a sewing machine and quadrupled in a copying process frame by frame before a sound track was added.

After a conspicuous boom of direct animation in the 1980s’ experimental film production, the cameraless approach seems to see a revival on a new level within the context of contemporary art. In a world pervaded by immaterial digital media, especially younger artists are discovering the aesthetic character of celluloid as a material, whose sensory, particularly haptic qualities could hardly be achieved with electronic pictures. For his series of cameraless studies titled "Available Light," the artist Luis Recoder (*1971), for example, exposed the film rolls in their light-proof packaging to a precisely controlled incidence of light. The resulting filmic tableaus of light and intense, pulsating color gradients resemble works by artists like James Turrell or Robert Irwin. California-based Jennifer West (date of birth unknown) has produced a body of 50 direct films since 2004. She subjects her material to complicated interventions and procedures in a performative mise-en-scène, as it were. She uses all everyday materials conceivable, from food and lipstick to motorcycle tires, to work on different formats of film up to 70 mm wide gauge, which are also bathed in more or less effective substances, the respective concept revealing itself only through the title, such as in the case of her work "Film Wearing Thick Heavy Black Liquid Eyeliner That Gets Smeary (70 MM film leader lined with liquid black eyeliner, doused with Jello Vodka shots and rubbed with body glitter)." West’s immersive psychedelic filmic spaces, many of which already appeal to the sense of taste, smell, or hearing through the work’s title, powerfully recall the vision of film as synaesthetic art that pervades the history of direct film from Len Laye to Harry Smith and Stan Brakhage.

"ZELLULOID" WEBLET: A special microsite – http://www.schirn.de/zelluloid – has been created to accompany the exhibition. The weblet, which will be going online with the opening of the show, consists of two areas. One offers information on the artists in the exhibition and their films, of which excerpts will be available. The site’s second area invites users to participate: here, film material can be digitally scraped, scratched, painted, or manipulated chemically. Users may feed their works into their preferred social network with a mouse click and thus recommend the exhibition at the Schirn. The microsite has been developed and sponsored by Scholz & Volkmer.