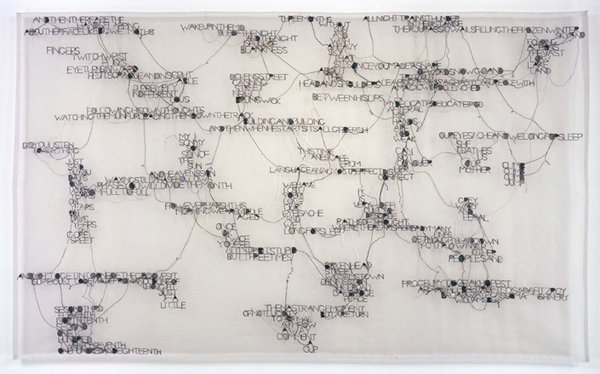 We are delighted to present Revenant at carlier | gebauer, the first solo exhibition by Australian artist Jessica Rankin, who lives in New York. Rankin’s wall pieces create compositions of words, colour and shapes on a gauze-like material (organza), opening up a distinct artistic stratum set between drawing and writing.

Rankin’s works appear to form translations of diverse fields that are generally clearly distinguished from each other. Her formats evoke those of landscape and history painting, whilst her motifs combine structures from the world of nature and concrete poetry, and the clear black lines of her letter-images cut through the pieces’ translucent surfaces. In Revenant Rankin brings together works produced over the last two years, with titles reminiscent of nocturnal scenes: Moon River, Empty Night, Cloud from Silt, Termagant, Dark Star. Revenant, the title she gives the exhibition, appears in Freud as a central topos of the eerie, as the involuntary recognition of a counterpart who has stolen a march on us, observing us before we have a chance to observe. Rankin’s works articulate this kind of gaze. The intrinsic elements we recognise over and over again – embroidery, the poetic approach to words as material – fall more within the scope of the private sphere. They recall Emily Dickinson’s poems, written in the seclusion of her study, as well as suggesting housework, ascribed for centuries to women’s realm. The more recent characterisation of these activities as “affective labour” constitutes a much clearer link to Rankin’s work. The embroidery becomes legible here as a personal drawing, transcending the private sphere, and in which words are appropriated and do not require syntax in order to find expression – Rankin’s works sketch out new levels in the space. Fixed close to the wall, the physicality of the fabrics is maintained, with landscapes composed of lines, of threads coming together and mutating into writing again. Abstraction and figuration lie close together; just as words can be identified, we also recognise motifs once again, yet these are deployed in an abstract mode, becoming concrete only through as part of a context, as the shared grammar of the oeuvre. Rankin’s sources – scientific diagrams and cartographies – are in a certain sense similar to the words she works into the organza. Both are descriptive systems, pattern recognition and both are reworked to reveal the qualities of the materials. The precision of Rankin’s works lies in the aesthetic autonomy she accords to the materials, the words, the shapes and perspectives. Rankin’s “affective labour” objectifies her apparently subjective means, turning them into aesthetic cartographies of a distinct grammar.

Young British artist Sara Barker takes the frame as her point of departure in approaching drawing. She creates sculptures that cut positions into the space. Her fragile constructions, composed of newspapers, aluminium and other metals, create three-dimensional drawings, which produce new spatial proportions and generate thresholds. Barker constructs transitions, whose materials assume seemingly impossible stances. Held in place by the paint and newspapers layered upon them, Barker’s figures are never imprecise or sketchy. They are characters, bearing precise names that identify them as minutely detailed reconstructions of a context, as aesthetic descriptions of a relationship. Geometric parameters and mathematical precision recur in Barker’s oeuvre as the material qualities of unreal small components, and her sculptures tease out a meaning from these that apparently had always been lying dormant within them. Window Writing is the first presentation of Barker’s work in Germany. Works of Sara Barker are currently shown in a solo exhibition at MaryMary in Glasgow and will be on view end of June at the Zero Budget Biennial in Berlin.