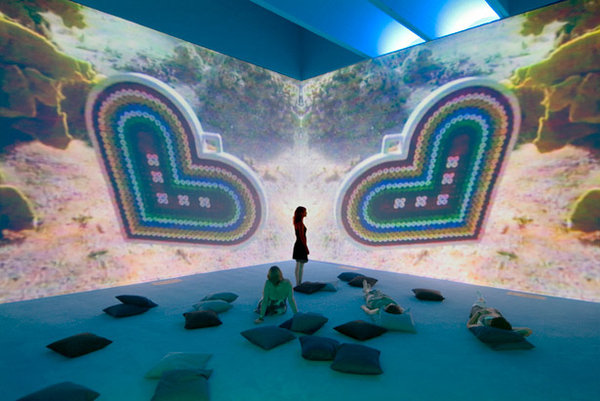 Pipilotti Rist was awarded the 2009 Joan Miró Prize for her wide-ranging creative curiousity and her outstanding contribution to the current art scene. The jury's unanimous decision was based on the fact that "over the last twenty years Pipilotti Rist has never ceased to surprise and provoke us with her artistic explorations that delve into psychic and aesthetic landscapes, while penetrating the deepest strata of both our personal and collective consciousness, often straddling them both in a forceful and elusive manner."

Friendly Game – Electronic Feelings is the artist's most extensive exhibition ever presented in Spain. The show comprises thirteen video installations—ten at the Fundació Joan Miró and three at the Centre Cultural de Caixa Girona—presenting a broad and complete view of Pipilotti Rist's artistic trajectory to date.

Two of Rist works presented at the Fundació Joan Miró, Doble llum and Temps lliure, were created especially for this exhibition. The first offers a dialogue between Rist and Joan Miró through a video projection on Miró's sculpture, Femme, dating from 1968 and a part of the Fundació's permanent collection. This piece is Han Nefkens' first donation of an artwork to Spain and will become part of the Fundació Miró's collection. Temps lliure, the other work created for this exhibition, is a forest of words that, in the artist's views, "try to clean the visitors' brains and guide them." Because Rist always names her works in the language of the country in which they are first shown, both pieces are titled in Catalan.

Pipilotti Rist (Grabs, Switzerland, 1962) has shown her works in museums around the world, including the Centre Georges Pompidou in Paris, the MoMA in New York and Rotterdam's Boijmans Van Beuningen Museum. Rist's first feature-length film, Pepperminta, premiered in September 2009. Included among the artist's forthcoming works is a ceiling piece for Jean Nouvel's building in Vienna (Praterstrasse 1), scheduled to open in October 2010.

Accompanying the exhibition is a book by the artist also titled Friendly Game – Electronic Feelings, produced by Han Nefkens and designed by Thomas Rhyner of the Atelier Rist. The book includes photographs of the artist's works shown in both museum spaces together with poems by Pipilotti Rist and essays by Martina Millà, Han Nefkens and Karin Seinsoth.

This exhibition submerges us in Rist’s colourful universe. The exhibition begins with two small video installations, Porqué te vas? (nass) Why Are You Going? (Wet) (2003) and Grabstein für RW Tombstone for RW (2004), and then moves on to one of the artist’s best-known works, Sip My Ocean (1996). This piece uses two walls that meet in a corner of the room, serving as large screens onto which are projected an underwater scene with people swimming around to the sound of Pipilotti Rist’s hypnotic voice singing Chris Isaak’s Wicked Game. This work speaks about our deep lifelong wish to understand each other completely and our nearly impossible desire to be synchronic.

In Tyngdkraft, var min vän Gravity, Be My Friend (2007), people and leaves float in space. The title is an invitation to reflect on the force of gravity while lying back and watching the projections on two amorphous ceiling panels. Do we see and hear differently when our muscles are relaxed?

The next installation in the exhibition is Ginas Mobile Gina’s Mobile (2007), a mobile formed by a branch, a copper globe and a plexiglass tear, across which projections of large-scale vulvas travel; because of the uncommon paleness of the images, they are not easy to recognise and thus are deprived of their usual connotations. Here the artist gently questions social fears and taboos.