The Reopening of the K20

After two years of intensive renovations, the Kunstsammlung am Grabbeplatz reopens its refurbished and expanded building. Galleries are occupied by key works from the permanent collection joined by new artistic projects, and visitors are enticed by a combination of the familiar and the transitory. Also on view four enthralling international artist's projects, which occupy four functional spaces within the Kunstsammlung: Sarah Morris, Joep van Lieshout, Olafur Eliasson and Karin Sander. 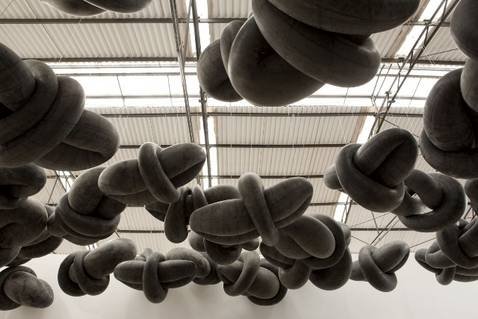 On July 10, 2010, the day arrives at long last: after two years of intensive renovations, the Kunstsammlung am Grabbeplatz will reopen its refurbished and expanded building. Galleries will be occupied by key works from the permanent collection joined by new artistic projects, and visitors will be enticed by a combination of the familiar and the transitory.

The inaugural presentation of the permanent collection am Grabbeplatz by Director Marion Ackermann follows a new and unfamiliar rhythm. Visitors will be guided toward the works of art via a new spatial configuration, a meandering sequence of galleries, and will enjoy a fresh look at the returning works from the regional collection by Max Ernst, Picasso, Klee, Pollock, Beuys, and Richter in the totally renovated building. The result is a purist arrangement which emphasizes the museal aspect, and which offers a sense of tranquility, permanence, and validation, along with the certainty of re-encountering the familiar.

A radical contrast to this presentation is offered by the staging of the festal architecture of the new building. This extension, executed by the architects Dissing + Weitling (Copenhagen), comprises two pillar-free halls with high-level, cutting edge exhibition technology. The approximately 2000 m² of exhibition architecture - which becomes operational in July of 2010 - assimilates itself seamlessly in visual terms to the main building, which dates from 1986. The polished granite façade of the Kunstsammlung, whose interior offers spacious galleries and natural lighting for the display of artworks, offers an image of nobility and modernity. For the reopening, the two halls are introduced to the public via a pair of ephemeral and suggestive spatial scenarios; in late-summer, they make their debut as exhibition galleries with "Joseph Beuys: Parallel Processes."

Also on view will be four enthralling international artist's projects, which will occupy four functional spaces within the Kunstsammlung: Sarah Morris has clad the 27-meter-long terminal wall of Paul-Klee-Platz with a colorful shimmering structure entitled "Hornet" (2010). Joep van Lieshout opens his "Bar" in the former Café Zwey. In front of the so-called "flower windows," Olafur Eliasson has colored vapor rise through a light well and up into the heavens. And Karin Sander becomes the first artist to take into operation as a production workshop the new Laboratory of the Department of Education, which facilitates communication about art in every sense.

Taking place at 2 p.m. to mark the reopening of the collection on July 10, 2010 will be a large public festival at Grabbeplatz. Numerous cost-free educational offerings for friends of the Kunstsammlung of all ages invite guests to view artworks, to participate, create, and to engage in discussion. On July 9th at 3 p.m., events are kicked off by a preview for young people, and on Saturday and Sunday, young friends of art are invited to attend a large Children's Festival featuring art exhibits on Paul-Klee-Platz. For adults, art experts will be available for conversations in the museum's galleries, where they will provide information about the collection, about the new projects, and about the museum's history and architecture.

An opening celebration will take place on July 10, 2010 at the Ständehaus, where the presentation "Intensif-Station" – 26 Künstlerräume im K21 / "Intensif-Station" – 26 Artist's Rooms in the K21 (ending September 4, 2011) will be on view beginning at 3 p.m. In 26 different rooms, installations and ensembles of works owned by the Kunstsammlung will be supplemented by new rooms which have been developed on site by Monica Bonvicini, Nathalie Djurberg, Lucy Skaer, and other artists. This exhibition was named after an installation by Thomas Hirschhorn which bears the same title, and whose theme is the intensity of the art experience. Additional surprises are provided by eight young artists who have been invited to create works especially for the arcade passageways.

Kunstsammlung Nordrhein-Westfalen
Grabbeplatz 5, 40213 Düsseldorf
From July 10 to 25, 2010, admission to both buildings will be free of charge for all visitors