"To Egypt! The Travels of Max Slevogt and Paul Klee" features approximately 130 paintings, watercolors, and drawings, elucidating the upheavals that occurred during the transition from Impressionism to Classical Modernism. Wael Shawky presents his film trilogy Cabaret Crusades, in which marionettes cabaret-like reenact the history of the medieval crusades. 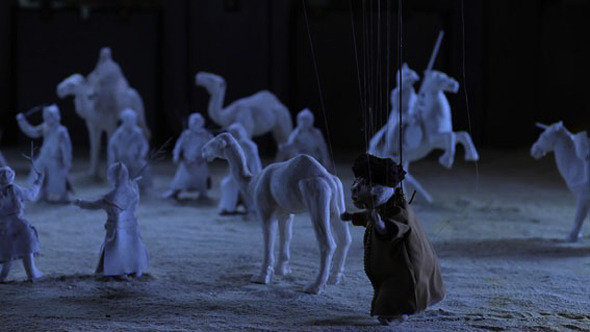 To Egypt!
The Travels of Max Slevogt and Paul Klee

Among travelers to Egypt were the Impressionist painter Max Slevogt (1868-1932) and Paul Klee (1979-1940), a leading representative of the artistic avant-garde. In the exhibition To Egypt! The Travels of Max Slevogt and Paul Klee, approximately 130 paintings, watercolors, and drawings – all produced in connection with their Egyptian travels – elucidate the upheavals that occurred during the transition from Impressionism to Classical Modernism. This exhibition has received generous support in the form of high-quality loan works from museums in Germany and abroad, along with renowned private collections. Complementing the presentation of artworks are historic photographs and documents.

During his Egyptian trip, Slevogt produced a singular cycle of powerfully colorful paintings. These works, now preserved in Dresden, are extraordinarily fragile, and are permitted to leave the museum that houses them only in exceptional cases. Slevogt’s highly individual achievement provide a counterpoint to Paul Klee’s idiosyncratic and poetic pictorial universe: the selection of works by Klee range from the early drawings produced around 1900 to the striking late works of the 1930s.

This exhibition juxtaposes the works of a pair of artists who, although coexisting during the same period, exemplify highly divergent pictorial traditions and intellectual worlds. Not only did Slevogt and Klee experience Egypt differently, they processed their artistic perceptions in markedly contrasting ways. Slevogt journeyed to Egypt in spring of 1914, when the country was still under British colonial rule. His journey (which also took place during the German Imperial era), stood in the tradition of the Grand Tour typically undertaken by painters of the Orient. Fifteen years later, during the turn from 1928 to 1929, Paul Klee followed the same route from Alexandria via Cairo and Luxor to Aswan. Now under altered political and social conditions, his journey took him to a country that had achieved independence in 1922. With the foundation of the Weimar Republic at the end of World War I, Germany too experienced a political reorientation.

Both artists had been familiar with the culture of ancient Egypt through exhibitions held in Germany after major excavations such as those at Tell el-Amarna, where the celebrated Bust of Nefertiti was discovered in 1912. Slevogt’s image of Egypt was also stimulated by fantastical tales such as The Thousand and One Nights, which captivated him already as a child, and served as a continuous source of inspiration for paintings and illustrations. As early as the period around 1900, Klee had incorporated forms into his works that are reminiscent of the pyramids and hieroglyphs. A trip to Tunisia in 1914 further fueled his interest in North Africa and the Orient. The impressions Slevogt received in Egypt sparked a hitherto unprecedented coloristic and compositional virtuosity. Not the historic ruins, the pyramids and temple remains, stood at the center of Slevogt’s interest, but instead the people, everyday life at the marketplaces, along with the endless desert landscape. Unlike Slevogt, Klee traveled to Egypt alone and with minimal luggage. Klee produced almost no work in Africa, instead reflecting upon and transforming the visual stimuli he received there in a series of new works only after returning to his studio.
An Exhibition of Staatliche Kunstsammlungen Dresden and Kunstsammlung Nordrhein-Westfalen, Düsseldorf.

In his first major museum exhibition in Germany Egyptian artist Wael Shawky (*1971) presents his film trilogy Cabaret Crusades, in which marionettes cabaret-like reenact the history of the medieval crusades. Shawky’s multiple awarded films explore the ways in which projections and manipulations of the foreign, as well as confrontations with it, actually function. What lies behind the multi-faceted mechanisms of constructing and telling history? While the first two parts of Shawky’s Cabaret Crusades will be expansively screened at Grabbehalle from 6 September, the in cooperation with the Kunstsammlung Nordrhein-Westfalen produced third part The Secrets of Karbala will be shot in the same space and premiere at 4 December. Until then Wael Shawky and the Kunstsammlung Nordrhein-Westfalen will transform the exhibition space into a site of art production in an unprecedented way.

In Cabaret Crusades, among the much discussed discoveries at Documenta 13, richly detailed and costumed marionettes perform against fantastical backdrops, reenacting the martial events of the eleventh-twelfth centuries in ways that are simultaneously childlike and gruesome. The scenario of the trilogy is based on the book “The Crusades Through Arab Eyes” (1983), the work of the French-Lebanese author Amin Maalouf (*1949). Shawky mixes together the European perspective, notoriously shaped by fantasy and wishful thinking about the Middle East, with Arab forms of representation. With the historical Crusades, Shawky takes up a theme that seems highly current today, even 1000 years later, in light of current and ongoing conflicts in the Middle East. Today as well, the locations featured in the film, among them Aleppo, Damascus, and Baghdad, are theaters of war. Inevitably, these puppets, controlled by strings, and seemingly set in motion by remote control, pose the question: Who really pulls the strings of history?

In addition to the Wael Shawky and Slevogt/Klee exhibitions, the theme of Egypt is also the pivotal reference point for the program “F3. Approaching an Unknown Future” at the Schmela Haus. Scheduled for autumn of 2014 at this venue are numerous events dealing with the Egyptian situation. Inaugurated at the same time is the Curator in Residence Program, which receives support from the Goethe Institute. The initial phase involves three jury-selected curators from Egypt, who will contribute in productive ways during their visits through their own concerns and themes to the events program at the Schmela Haus, with its orientation toward exchange and dialogue. The Egyptian-themed activities planned for the Schmela Haus, the exhibitions To Egypt! and Wael Shawky. Cabaret Crusades, as well as the production of the third part of Shawky’s Cabaret Crusades Trilogy under the auspices of the Kunstsammlung Nordrhein-Westfalen, promise to offer a multifaceted perspective of the art, culture, and reality of this land, so steeped in history, whose future is currently being renegotiated.