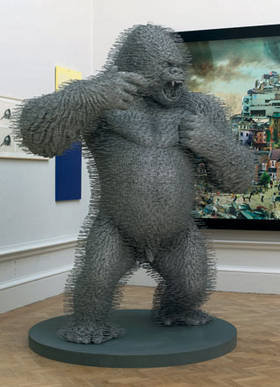 The Royal Academy's annual Summer Exhibition is the world's largest open submission contemporary art exhibition. Now in its 242nd year, the exhibition continues the tradition of showcasing work by both emerging and established artists in all media including painting, sculpture, photography, printmaking, architecture and film. This year's co-ordinators, Royal Academicians Stephen Chambers and David Chipperfield, have selected works for the exhibition around the theme of 'Raw'.

The Summer Exhibition attracts a high volume of entrants annually with over 11,000 entries this year. The majority of the 1267 selected works are on sale, offering visitors an unrivalled opportunity to purchase original artwork by high profile and up-and-coming artists.

As is the custom, the exhibition features work by Academicians and Honorary Academicians and includes new work by artists such as Antoni Tapies, Ed Ruscha, Michael Craig-Martin, Gillian Ayres and Tracey Emin. Fiona Rae has curated a gallery within the exhibition. Recent work by artists including Nicola Tyson, Gary Webb, Martin Maloney, Nigel Cooke and Cecily Brown are exhibited in this room. Artists' books feature in the Summer Exhibition for the first time this year with a number of books on display.

This year the Architecture Gallery is located in the large Lecture Room and David Chipperfield has curated and organised the exhibits in this space.
Following on from last year's successful BBC TWO Series Culture Show special on the Summer Exhibition, the Royal Academy of Arts is delighted to be working with the BBC once more.

MEMORIAL GALLERIES IN THE JOHN MADEJSKI FINE ROOMS
The Summer Exhibition 2010 includes a memorial display of work by Academicians who have died in the past year. Work by Craigie Aitchison RA, Jim Cadbury-Brown RA, John Craxton RA, Barry Flanagan RA, Freddy Gore RA, Donald Hamilton Fraser RA, Flavia Irwin RA and Michael Kidner RA, who sadly died in 2009, are displayed in the Fine Rooms as an extension to the Main Galleries.

ANNENBERG COURTYARD
Three large bronze sculptures of leaping hares by Barry Flanagan RA (1941 – 2009) occupy the Royal Academy's Annenberg Courtyard. Hare and Bell 1988 (height 3.5m), Nijinski Hare 1996 (height 5.18m) and Large Left-Handed Drummer 2006 (height 4.9m) have been installed as part of a memorial display to the artist. Flanagan was one of the most popular and distinctive artists of his generation and was internationally renowned for his figures of leaping hares. Barry Flanagan's sculptures are the latest installation in the RA's programme of Sculpture in the Courtyard and follows on from Bryan Kneale's Triton III (2009), Sir Anthony Caro's Promenade (2008), the Chapman's The Meek Shall Inherit the Earth, but not the Mineral Rights (2007), Anselm Kiefer's Jericho (2007), Rodin's Gates of Hell (2006) and Damien Hirst's Virgin Mother (2006).

EVENTS PROGRAMME
Alongside the Summer Exhibition 2010, the Royal Academy of Arts will be running a diverse programme of special events, evening lectures and gallery talks. Dedicated events for families include gallery talks and workshops. For children aged between 8 and 13 there are free printed guide sheets to the exhibition. Activity trays, including art materials, are available for younger visitors to create their own works of art.