The exhibition includes significant works from 1993 onwards, the date that marks his return to China following more than a decade living in New York. Ai Weiwei created new, site-specific installations and interventions throughout the Academy's spaces. 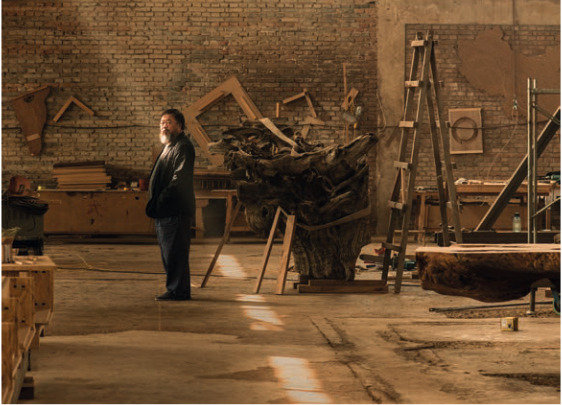 T he Royal Academy of Arts present s a landmark exhibition of the Honorary Royal Academician, Ai Weiwei. Although Ai is one of China ’ s leading contemporary artists, his work has not been seen extensively in Britain and the Royal Academy present s the first major institutional survey of his artistic output. The exhibition include s significant works from 1993 onwards, the date that marks Ai Weiwei ’ s return to China following more than a decade living in New York. Ai Weiwei has create d new, site - specific installations and interventions throughout the Royal Academy ’ s spaces.

On his return to China in 1993, Ai began to work in a direction that was bot h embedded in Chinese culture and reflected the exposure he had had to Western a rt during his twelve year sojourn in the US . Citing Duchamp as ‘ the most, if not the only, influential figure ’ in his art practice, Ai continues to engage with creative tension s between complex art histories , conceiving works with multiple readings in the process. To this end h e employs traditional materials and interventions with historic objects throughout his work from Neolithic vases (5000 - 3000 BCE) to Qing dynasty (1644 - 191 1) architectural components and furniture. By creating new objects from old, Ai challenges conventions of value and authenticity in modern - day China. These artworks include Table and Pillar , 2002, from his Furniture series, and Coloured Vases , 2015.

Ai works in a variety of different contexts, scales and media. He transforms materials to convey his ideas, whether in wood, porcelain, marble or jade, testing the skills of the craftsmen working to his brief in the process. Some pieces take months to crea te and pass through lengthy periods of experimentation, pushing the boundaries of the formal qualities of a material. Sculptures such as Surveillance Camera, 2010 and Video Camera, 2010, both masterpieces in craftsmanship, monumentalise the technology used to monitor, simultaneously rendering it useless and absurd. A new artwork, Remains, 2015 , is also included in the exhibition. Fabricated in porcelain, the work replicates in meticulous detail a group of bones that were recently excavated at a site of a la bour camp that operated under Chairman Mao in the 1950s.

One of the key installations within the exhibition is Straight, 2008 - 12, part of the body of work related to the Sichuan earthquake of 2008. Fabricated from ninety tonnes of bent and twisted rebar (the steel rods used in the construction of reinforced concrete buildings), collected by the artist and straightened by hand, it is a sober monument to the victims of the earthquake. The subject of destruction, whether by demoliti on or as a consequence of natural disasters is one of a number of recurring themes and motifs that Ai returns to within his body of work.

Ai has created site specific sculptural installations for the Royal Academy’s spaces , including his monumental Tree displayed in the Annenberg Courtyard, consisting of eight individual trees, each measuring around seven metres tall . It is the largest installation of this work to date and t o enable the work to be displayed , the Royal Academy launched a Kickstarter crowdfunding campaign , where £123,577 was raised ; the l argest amount ever raised for a European art project on Kickstarter . Ai has also created a new work for the Wohl Central Hall, featuring a chandelier made of Forever bicycles, a recurring subject in h is work. Ai first began working with chandeliers in 2002 and this is the first time Ai has combined the two ideas, creating a chandelier from bicycles.

Ai Weiwei said: “ I ’ m honored to have the chance to exhibit at the Royal Academy of Art s . Tim Marlow and the rest of the exhibition team have a history of producing outstanding exhibitions. I ’ m very happy to be a part of it. This exhibition is my first major survey in London, a city I greatly admire. The selected artworks reflect my practice in recent yea rs, and also include new works made specifically for this sho w.”

Tim Marlow, Artistic Director and co - curator of the exhibition, said: “Ai Weiwei is one of the most important artists in the world today but his work has not been seen anywhere near as much as it should have been in the UK. This exhibition will begin to redress that balance and give an extensive new audience the chance to experience a creative phenomenon that is at once radical, political, architectural, historical, poetic, materially invent ive and transformative ... even before they’ve walked through the Main Galleries .”

Adrian Locke, co - curator of the exhibition said: “ 'Ai has greatly enjoyed the installation of his exhibition at the Royal Academy, constantly taking photos, finding time to s ign autographs and take selfies with visitors as well as engaging with the technicians on site. For him, being part of the process has been an emotional one, as it is nearly five years since he was last directly involved with overseeing an exhibition of th is scale and complexity being put together .”
br> In 2011, Ai was detained for 81 days by the Chinese authorities and his passport confiscated . I n an act of solidarity and support from his fellow artists and architects, Ai was elected an Honorary Member of the Royal Academy of Arts in May 2011. This exhibition will follow in the Royal Academy ’ s tradition of celebrating its Royal Academicians, continuing the strand of programming that has showcased some of the most significant living artists including Anish Kapoor, David Hockney and Anselm Kiefer.

The exhibition has been developed in close collaboration with Ai, who t ook an architectural approach to the layout of the exhibition, within the Royal Academy ’ s spectacular Main Galleries, befitting the monumental character of many of his pieces. The artist virtually navigated the spaces from his studio in Beijing, through video footage of the galleries and architectural plans. The curators also mad e regular visits to his studio. Ai Weiwei regained his passport in J uly 2015 and travell ed to London for the final installation period of the exhibition.

Image: Ai Weiwei in his studio in Caochangdi, Beijing, taken in April 2015