A moving plan B - chapter TWO. Sharp lines, interlocking diagonals, triangular shapes and grid framework make up the artistic vocabulary of Thomas Scheibitz, all of which are clearly visible in his frieze of works on paper entitled A moving plan B, 2010. The repetitive application of the vivid red, blue, yellow and green reveals how the artist pursues a reduction of form through the use of intertwining flat planes of colour. 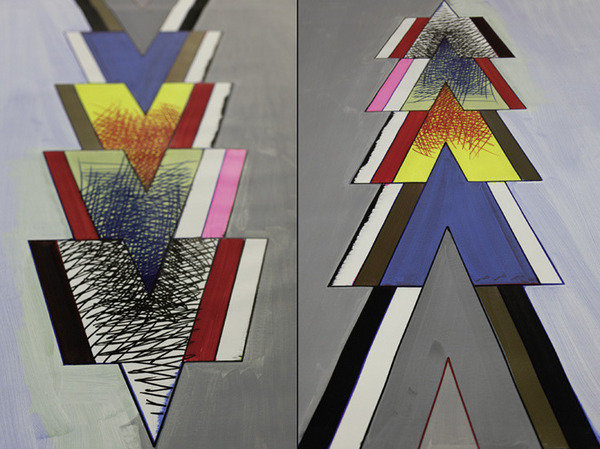 Sprüth Magers London is delighted to present an exhibition of new work by the German artist Thomas Scheibitz in his first solo show in London for over two years. Entitled ‘A moving plan B – chapter TWO’, the exhibition will feature a frieze of works on paper, drawings and sculpture. To coincide with his West London show, the artist will also organise an exhibition at the Drawing Room in East London.

Born in Radeberg, Germany in 1968, Thomas Scheibitz, a student of Professor Ralf Kerbach at the Dresden Art Academy, started painting and producing sculpture in 1990 and quickly gained international recognition. Through the use of both mediums, he explores the boundary between figuration and abstraction, playing with the traditional genres of landscape, still life and portraiture, and thus creating radical new forms that are graphically dynamic. His works are characterised by a chromatic artificiality, shallow depth and a startling delight in launching the composition’s perspective to its limits.

Sharp lines, interlocking diagonals, triangular shapes and grid framework make up the artistic vocabulary of Thomas Scheibitz, all of which are clearly visible in his frieze of works on paper entitled A moving plan B, 2010. The repetitive application of the vivid red, blue, yellow and green reveals how the artist pursues a reduction of form through the use of intertwining flat planes of colour. When encountering A moving plan B, 2010, the viewer is presented with a completed work which has progressed from preliminary sketches, drawings and photographs, all of which are used by the artist to construct a ‘storyboard’ or plan for a new series of work. The plethora of visual fragments that Scheibitz employs originate from an array of research material ranging from Renaissance paintings to contemporary cartoons, magazine cuttings, advertising and graphic design. These are harnessed through a digital camera and a small A5 size sketchbook the artist carries with him when on route from A to B. The source material is then transformed, becoming indistinguishable from its origins, and translated by the artist to assume part of the system of symbols and dynamic geometrics characteristic of his finished paintings and sculptures.

The artist’s meticulous planning is evident in 18 Drawings, 1998 – 2009; the work depicts recognisable and recurring forms which inhabit his paintings and sculptures such as the side profile portrait later developed in A moving plan B, 2010. For Thomas Scheibitz, the drawing process is both a stimulating and significant aspect of his work which captures the concept and ‘mental exercise’ involved in developing an idea. All of Scheibitz’s paintings, sculptures and drawings function together as one collaborative oeuvre: they are interrelated exercises in time and space, form and colour.

The exhibition will also feature Day and Night, 2010 a large scale sculpture which sees artificial neon light starkly contrasted against natural candle light. The artist’s residual interest in illusionism and representation is apparent in the sculpture which, through the use of natural light, refers to the real world while simultaneously inhabiting an ‘artificial world’, reinforced by the inclusion of neon light and detached bright colours.

Works from the exhibition at Sprüth Magers London link conceptually to the exhibition organised by Thomas Scheibitz, concurrently on show at the Drawing Room. ‘A moving plan B – chapter ONE’, will provide insight into the working processes of Thomas Scheibitz while, at the same time, showcasing various approaches to drawing as used by artists, architects, filmmakers and writers over the past 50 years. The artist has selected drawings that possess autonomy and convey meaning beyond the often constrained and specific conditions within which they are made. The exhibition will feature works by around 22 artists, including Thomas Demand, Tacita Dean and Dirk Bell, architect Bogdan Bogdanovich, writer Arno Schmidt and filmmaker Paul Sharits.