Under Destruction is a group exhibition, featuring twenty internationally known contemporary artists, that examines the use and role of 'destruction' in contemporary art. Predominantly kinetic, the show largely consists of works whose mechanisms reveal themselves in real time to the viewer. The strikingly spectacular nature of some works is complemented by an unexpected sense for subtlety and quietude in other works, the combination of both progressively revealing the rich diversity of destruction in contemporary art. 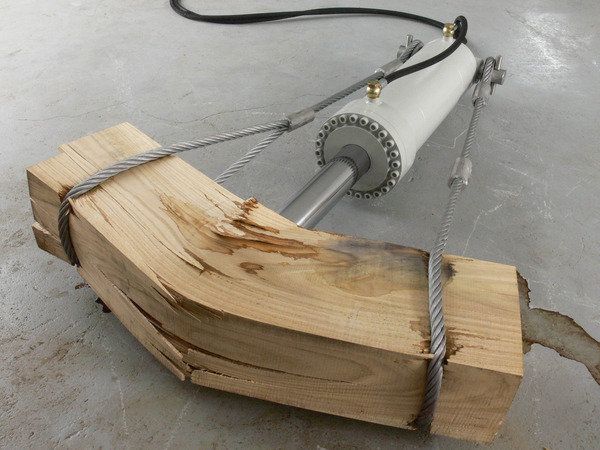 Under Destruction is a group exhibition, featuring twenty internationally known contemporary artists, that examines the use and role of “destruction” in contemporary art. Fifty years after Jean Tinguely's historic Homage to New York (1960) the present exhibition proposes a series of alternative approaches to a theme traditionally associated with the more spectacular and inherently protest-oriented work of Jean Tinguely, Gustav Metzger and others in the 50s and 60s. "If nothing can be created, something must be destroyed", is how Rosalind Krauss succinctly summarized Georges Bataille's La part maudite (The Accursed Share, 1949). While this phrase can basically describe the ethos of Under Destruction, the exhibition raises the stakes normally linked with such a deleterious theme. Not only does it explore the various modes of destruction in art, but, more importantly, it also addresses to what ends it is implemented. Indeed, the exhibition reflects on the subject from a series of angles, perceiving destruction as everything from a generative force to environmental memento mori, and from consumer fallout to a form of poetic transformation.

Predominantly kinetic, the show largely consists of works whose mechanisms reveal themselves in real time to the viewer. The strikingly spectacular nature of some works is complemented by an unexpected sense for subtlety and quietude in other works, the combination of both progressively revealing the rich diversity of destruction in contemporary art. Under Destruction can be divided up into a series of overlapping themes and categories, which are anything but hard and fast, and which inevitably blur in and out of one another.

The contributions of Nina Canell and Pavel Büchler engage with destruction as a form of transformation. In Canell's water-and-cement based work Perpetuum Mobile (40 kg) (2009- 2010), in which water is transformed into a mist via sonic vibrations which hardens a nearby sack of cement, a kind of destruction is broken down to some of its finest, molecular components. Meanwhile Büchler's series Modern Paintings (1999-2000), consists of flea-market bought paintings, which are un-stretched, inserted in a washer, and reconstituted by the artist on a stretcher, such that they resemble Art Brut abstractions. Modes and effects of consumption are addressed in the contributions of Johannes Vogl, Monica Bonvicini, Ariel Orozco, and Michael Landy. Vogl's absurd, homemade contraption Untitled (Machine to produce jam breads, 2007) which senselessly produces pieces of bread with jam on them, addresses questions of overproduction and consequently waste.

Comprised of a relatively fragile veneer of plaster precariously placed above a real floor which gradually fills up with holes made by visitors, Bonvicini's installation Plastered (1998), testifies to the consumption and deterioration of architecture by those who use it. Orozco's Doble Desgaste (2005), takes a more metaphysical approach toward consumption, speaking to the concentrated and deliberate dissipation of effort. In this photographic documentation of an “action“, Orozco systematically draws a portrait of a cube shaped eraser in graphite, photographs the portrait, erases it with the same eraser, redraws the eraser on the same piece of paper, photographs it, erases it, and so on until the eraser and the portrait are gone. Finally, Michael Landy's uneasy relationship with the accumulative identity of consumption is registered in the video documentation of his celebrated work Breakdown (2001), in which the artist had all 7,227 of his possessions, classified, dismantled, and destroyed in a department store in central London.

The consequences of consumption inevitably filter into the environment and technology. Arcangelo Sassolino's Untitled (2007), perceives technology as a brute, destructive force, which cannot be disassociated from environmental issues. Activated by the viewer through a motion detection sensor, Untitled is a hydraulic arm that gradually pushes into and destroys a large block of wood. Liz Larner's Corner Basher (1988), likewise depends directly on the visitor participation. This piece consists of a drive shaft mechanism, the activation and speed of which is controlled by the viewer, that swings a chain into and destroys the nearby corner wall.

Jonathan Schipper's The Slow Inevitable Death of American Muscle (2007-2008), pits technology against itself in an allegory of obsolescence, consumption and destruction. The installation is comprised of two cars that slowly enact a head-on collision over the course of an extended period of time, and in doing so, inevitably bring the memento mori onto the stage. Indeed, a close kinsman of destruction, the memento mori necessarily dominates the mood of several works in this exhibition. Christian Marlcay's video installation Guitar Drag (2000), which consists of imagery and a soundtrack of a guitar being dragged behind a pickup truck, is rich in association, the most symbolic being a historically fraught vanitas.

Roman Signer's methodically engineered acts of decimation, here represented by a trio of works, the videos Stuhl (Chair, 2002), Zwei Koffer (Two Suitcases, 2001) and Rampe (ramp, 2008), which respectively and heterogeneously depict the destruction of a chair, the contents of a suitcase and a small truck, have a way of always bringing issues of mortality into play. Nina Beier and Marie Lund's History makes a Young Man Old (2008), departs from the theme of technology and uses performance to facilitate a sense of deterioration wrought by time and use. For this piece, the artists' take turns rolling a crystal ball from wherever it is purchased in the city of an exhibition venue to the exhibition site itself. This powerful but economic work stages a loss of clarity, brought on through an attrition that is determined by forces beyond its control.

Meanwhile, Kris Martin's 100 years (2004) which quite simply consists of a bomb set to go off in 2104, dislocates the moment of destruction into a distant temporal elsewhere, and in doing so, incorporates that elsewhere and the destruction it is destined to undergo into the present, thus extending the domain of destruction well beyond the parameters of the exhibition itself. Where Martin's bomb trades on the future of destruction, other works, such as Ariel Schlesinger's Bubble Machine (2006), deal in its specter, envisaging destruction as pure potential. True to the spirit of Tinguely's quasi unhinged tinkering aesthetic, Schlesinger's madcap machine consists of a mechanism placed on top of a wooden ladder, which periodically drops bubbles of soap onto a small, electrified series of coils, making the bubble burst into flames. Here destruction becomes a more controlled and evocative force. If the melancholy frustration of this work is not without a certain humor, a few other works in this exhibition venture off the deep end into a kind of slapstick decimation.

Alex Hubbard's video's for example, such as Cinéopolis (2007), is a humble masterpiece of antic decimation. Replete with a Foley soundtrack, this video portrays the Hubbard carrying out a series of damaging acts upon a small movie screen from a bird's eye point of view, such as torching a group of metallic balloons and then tarring and feathering the screen. Martin Kersels Tumble Room (2001), takes humour to a more spectacular, if acrobatic level. For this piece, Kersels had a room constructed, outfitted it with all the accoutrements of a little girl, and placed it on a mechanism, which rotated the entire room end over end, until it gradually turned the somersaulting contents into dust. The kinetic sculpture is also accompanied by a video of a dancer, perilously negotiating the topples and turns of the room as it tumbles. Here destruction is deployed as bravura, as a kind of dandified testimony to being beyond the reach of destruction, or its effects.

Humour has always been a key component to Jimmie Durham's work, and can certainly be found in his performance St. Frigo (1996). The result of beginning his daily routine for about ten days in a row by throwing cobble stones at a refrigerator for one hour, this piece speaks to destruction as a daily ritual. By dint of this repetitive and iconoclastic act, Durham was able to assert a destructive tendency as a form of affirmation. Repetition likewise informs Alexander Gutke's The White Light of the Void (2002). This 16mm film installation simulates the meltdown of blank film stock, as if the film jammed in the projector, whereupon the bulb promptly burns through the celluloid. This small conflagration in turn produces an amoeba-like form that expands outward from the centre of the frame, swallowing it up and returning the film to its opening white frame, intact, and the loop resumes.

This work, which symbolically deals with issues of death, the afterlife and renewal, can be seen as a metaphor for the entire exhibition in which destruction itself is often a force of cyclical renewal. Where Gutke's work brings these metaphysical issues into the picture, Michael Sailstorfer's contribution, which is comprised of a high speed HD video transferred to 16mm film, uses that same picture, so to speak, to depict what for all intents and purposes looks like some kind of big bang, cosmic explosion: that, it turns out, is just a light bulb being shot by a rifle.